Emilio Godoy interviews GIOCONDA UBEDA, secretary general of the Agency for the Prohibition of Nuclear Weapons in Latin America and the Caribbean* - Tierramérica

MEXICO CITY, Feb 21 2012 (IPS) - Latin America and the Caribbean celebrated their 45th anniversary as a nuclear-weapon-free zone amidst allegations of British deployment of nuclear weapons to the South Atlantic and with no specific regime for the transport of radioactive waste. 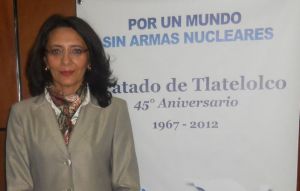 The transport of radioactive material is of concern to Central America and the Caribbean, says Gioconda Ubeda. Credit: Emilio Godoy/IPS

Earlier this month, the Argentine government accused the United Kingdom of deploying a nuclear-powered submarine armed with nuclear warheads to the Malvinas/Falkland Islands, an archipelago in the southern Atlantic Ocean that has been the subject of a sovereignty dispute between the two countries since the 19th century.

Argentina stressed that such a move would violate the Treaty for the Prohibition of Nuclear Weapons in Latin America and the Caribbean, better known as the Treaty of Tlatelolco, whose Additional Protocol II was signed and ratified by China, France, the Soviet Union, the United Kingdom and the United States, the world’s five nuclear powers when the treaty was adopted in 1967.

Under this additional protocol, the nuclear powers pledged “not to use or threaten to use nuclear weapons” against the countries of the region.

But the transport through the region of nuclear weapons and radioactive waste was not contemplated in the treaty, the first of its kind, which was signed by the nations of Latin America and the Caribbean on Feb. 14, 1967 in Tlatelolco, Mexico and entered into force in April 1969.

The transport of weapons “is one of the major challenges that needs to be addressed in the region,” says Costa Rican Gioconda Ubeda, secretary general of the Agency for the Prohibition of Nuclear Weapons in Latin America and the Caribbean (OPANAL), the intergovernmental body that enforces the Treaty of Tlatelolco.

The transport of radioactive material is also an issue of concern for Central America and the Caribbean, but there are differing stances among the parties to the treaty as to whether or not this issue should be included on the OPANAL agenda, she added.

Ubeda, the OPANAL secretary general for the 2010-2014 period, spoke with Tierramérica during the activities held in the Mexican capital to mark the 45th anniversary of the world’s first nuclear-weapon-free zone.

These zones “were created as dikes, as islands, to shield these territories which, through political will, should evolve to become a driving force towards the ultimate goal of completely eliminating nuclear weapons,” said Ubeda.

Q: How should the transport of nuclear weapons and radioactive waste in the region be addressed?

A: The transport of nuclear weapons was left out of the treaty. There were lengthy discussions that are well documented in the minutes, but no agreement was reached. This is one of the major challenges that the region needs to address.

Each individual state is responsible for the application of international law, as well as maritime control in their own territorial waters. It is not that the conditions do not exist to address it, but I see it more within the sphere of each state.

In terms of radioactive waste, it is not contemplated in the treaty, but there are binding international legal instruments that deal with the issue, such as the United Nations Convention on the Law of the Sea. It is a subject related to the environment, which has another sphere of implementation.

In the meantime, there is valid concern in the Caribbean and Central America over the transport of this waste through the region and the eventuality of an accident. This is an issue that needs attention. But it is not on the OPANAL agenda, and there are conflicting stances among the states parties as to whether or not it should be included.

Q: What does it imply for the region that the United States has a nuclear arsenal?

A: We do not agree with nuclear-weapon-free zones being used as a security mechanism for the application of the doctrine of mutually assured destruction, which emerged during the Cold War.

This is a situation we have become accustomed to. Latin America’s response was to say to the major powers, “We have decided to be a nuclear-weapon-free zone and we ask you to respect this and assume a commitment through the additional protocols not to use or threaten to use nuclear weapons or establish missiles in the region.”

This was achieved, yet not only the United States, but rather any country that has nuclear weapons always signifies a risk, because the threat is not only for a particular region.

This spirit of Tlatelolco clearly reflected this concern. The zones were created as a means to pursue the goal of freeing the world of nuclear weapons. And so we continue to be concerned no matter where those weapons are.

Q: How have the nuclear-weapon-free zones evolved?

A: Our view is that they were created as dikes, as islands, to shield these territories which, through political will, should evolve to become a driving force towards the ultimate goal of completely eliminating nuclear weapons

Now it is a matter of building bridges between the dikes and supporting the construction of new zones, like one in the Middle East, which has been under discussion since 1995, although the first real progress was only made last year.

It is our responsibility to share our experience, because we continue working to preserve the nuclear-weapon-free zone, and our agenda includes working towards the universal goal of freeing the word of this threat.

Q: What can be done to unblock the international process of non-proliferation and disarmament?

A: If I had the answer to that question, I think I would be named to one of the high leadership positions in the United Nations. This is a question that needs to be addressed by negotiating effective measures that lead us towards vertical non-proliferation (preventing the expansion of existing national nuclear arsenals) and horizontal non-proliferation (preventing the expansion of the number of countries with nuclear arsenals) and the commitment to eliminate nuclear weapons.

Some agreements have been reached, and now it is a matter of ensuring their implementation, for example, for countries with arsenals that are no longer useful to withdraw them from circulation.

It is also important for firmer steps to be taken towards disarmament. This is an issue in which the nuclear powers play the most important role.