U.S. Leak on Israeli Attack Weakened a Warning to Netanyahu

WASHINGTON, Feb 4 2012 (IPS) - When Defence Secretary Leon Panetta told Washington Post columnist David Ignatius this week that he believes Israel was likely to attack Iran between April and June, it was ostensibly yet another expression of alarm at the Israeli government’s threats of military action. 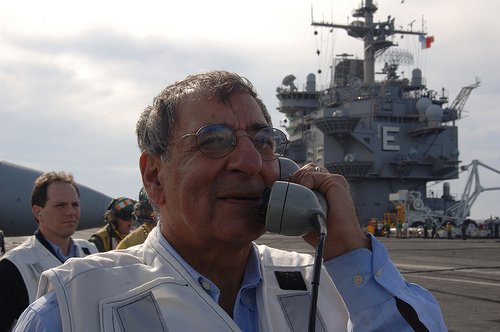 The leak by Panetta (above) appears to confirm fears that efforts to distance the U.S. from an Israeli attack are undermined by competing interests. Credit: U.S. Navy

But even though the administration is undoubtedly concerned about that Israeli threat, the Panetta leak had a different objective. The White House was taking advantage of the current crisis atmosphere over that Israeli threat and even seeking to make it more urgent in order to put pressure on Iran to make diplomatic concessions to the United States and its allies on its nuclear programme in the coming months.

The real aim of the leak brings into sharper focus a contradiction in the Barack Obama administration’s Iran policy between its effort to reduce the likelihood of being drawn into a war with Iran and its desire to exploit the Israeli threat of war to gain diplomatic leverage on Iran.

The Panetta leak makes it less likely that either Israeli Prime Minister Benjamin Netanyahu or Iranian strategists will take seriously Obama’s effort to keep the United States out of a war initiated by an Israeli attack. It seriously undercut the message carried to the Israelis by Gen. Martin Dempsey, chairman of the Joint Chiefs of Staff, last month that the United States would not come to Israel’s defence if it launched a unilateral attack on Iran, as IPS reported Feb. 1.

A tell-tale indication of Panetta’s real intention was his very specific mention of the period from April through June as the likely time frame for an Israeli attack. Panetta suggested that the reason was that Israeli Defence Minister Ehud Barak had identified this as the crucial period in which Iran would have entered a so-called “zone of immunity” – the successful movement of some unknown proportion of Iran’s uranium enrichment assets to the highly protected Fordow enrichment plant.

But Barak had actually said in an interview last November that he “couldn’t predict” whether that point would be reached in “two quarters or three quarters or a year”.

Why, then, would Panetta deliberately specify the second quarter as the time frame for an Israeli attack? The one explicit connection between the April-June period and the dynamics of the U.S.-Israel- Iran triangle is the expiration of the six-month period delay in the application of the European Union’s apparently harsh sanctions against the Iranian oil sector.

That six-month delay in the termination of all existing EU oil contracts with Iran was announced by the EU Jan. 23, but it was reported as early as Jan. 14 that the six-month delay had already been adopted informally as a compromise between the three-month delay favoured by Britain, France and Germany and the one-year delay being demanded by other member countries.

The Obama administration had also delayed its own sanctions on Iranian oil for six months, after having been forced to accept such sanctions by the U.S. Congress, at the urging of the American Israel Public Affairs Committee.

The administration recognised that six-month period before U.S. and EU sanctions take effect as a window for negotiations with Iran aimed at defusing the crisis over its nuclear programme. So it was determined to use that same time frame to put pressure on Iran to accommodate U.S. and European demands.

By the time the news of the postponement of the U.S.-Israeli military exercise broke on Jan. 15, Panetta was already prepared to take advantage of that development to gain diplomatic leverage on Iran.

Laura Rozen of Yahoo News reported that U.S. Defence Department officials and former officials, speaking anonymously, said Barak had requested the postponement and that they were “privately concerned” the request “could be one potential warning signal Israel is trying to leave its options open for conducting a strike on Iran’s nuclear facilities in the spring.”

Instead of reinforcing the effort by Panetta to use the six-month window to bring diplomatic pressure, Defence Minister Barak, speaking on Army Radio Jan. 18, said the government had “no date for making decisions” on a possible attack on Iran and, adding “The whole thing is very far off. .?.?”

Another indication that the Ignatius column was not intended to increase pressure on Israel but to impress Iran is that it did not reinforce the message taken by Gen. Dempsey to Israel last month that the United States would not join any war with Iran that Israel had initiated on its own without consulting with Washington.

Ignatius wrote that the administration “appears to favor staying out of the conflict unless Iran hits U.S. assets which would trigger a strong U.S. response.” But then he added what was clearly the main point: “Administration officials caution that Tehran shouldn’t misunderstand: the United States has a 60-year commitment to Israeli security, and if Israeli population centers were hit, the United States could feel obligated to come to Israel’s defense.”

Ignatius, who is known for reflecting only the views of the top U.S. defence and intelligence officials, was clearly reporting what he had been told by Panetta in Brussels.

Further underlining the real intention behind Panetta leak, Ignatius went out of his way to present Netanyahu’s assumptions about a war as credible, if not perfectly reasonable, hinting that this was the view he was getting from Panetta.

The Israelis, he wrote “are said to believe that a military strike could be limited and constrained”. Emphasising the Israeli doubt that Iran would dare to retaliate heavily against Israeli population centres, Ignatius cited “(o)ne Israeli estimate” that a war against Iran would only entail “about 500 civilian casualties”.

Ignatius chose not to point out that the estimate of less than 500 deaths had been given by Barak last November in response to a statement by former Mossad director Meir Dagan that an attack on Iran would precipitate a “regional war that would endanger the (Israeli) state’s existence”.

After that Barak claim, Dagan said in an interview with Haaretz newspaper that he assumes that “the level of destruction and paralysis of everyday life, and Israeli death toll would be high.”

But Ignatius ignored the assessment of the former Mossad director.

The Panetta leak appears to confirm the fears of analysts following the administration’s Iran strategy closely that its effort to distance the United States from an Israeli attack would be ineffective because of competing interests.

Reza Marashi, research director at the National Iranian-American Council, who worked in the State Department’s Office of Iranian Affairs from 2006 to 2010, doubts the administration can avoid being drawn into an Israeli war with Iran without a very public and unequivocal statement that it will not tolerate a unilateral and unprovoked Israeli attack.

“Friends don’t let friends drive drunk. And sometimes the only way to ensure that a friend doesn’t endanger you or themselves is to take the away the car keys,” Marashi said.