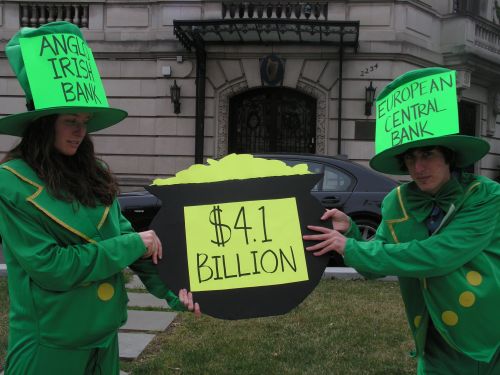 WASHINGTON, Mar 16 2012 (IPS) - On the eve of St. Patrick’s Day, activists dressed up as leprechauns appeared in front of the Embassy of Ireland to protest Irish taxpayer money being used to pay debts of the Anglo-Irish Bank and the Irish Nationwide Building Society (Anglo/INBS).

The leprechaun costumes represented the Anglo-Irish Bank and the European Central Bank (ECB) grabbing a 4.1-billion-dollar “pot of gold”, money taken from the Irish people.

The event was organised by Jubilee Network USA, an alliance of labour organisations and churches promoting global economic justice, in association with civil groups in Ireland.

“These debts are not the responsibility of the Irish people, and they should not be forced to pay,” the activists wrote in a letter presented to the Embassy.

Ireland had a robust “Celtic Tiger” economy from 1995 to 2007. From 2001 onwards, the economic growth was majorly based on a property price bubble fuelled by a massive rise in household debt, leading to reckless and speculative lending, mainly by Anglo/INBS.

According to Jubilee USA, the bank “recklessly financed some of Ireland’s worst property speculators for unsustainable golf courses, hotels and super markets, and saddled the Irish people with a massive unjust debt.”

In 2008, the Anglo loans scandal led to the resignations of the bank’s Chairman Sean FitzPatrick, CEO David Drumm, and board member Lars Bradshaw, who had given out hidden loans amounting to 87 million euros between years 2000 and 2007.

In 2009, the Irish government nationalised the bank. In 2010, the bank reported a 12.7-billion-euro loss, the largest in Irish corporate history, when the government had already injected four billion euros of capital into the lender.

“(The debt) was accumulated by a bank that was into risky speculation, not really investing money but gambling with the money. When the market crashed and the bank went belly up, the Irish government was in a place where they essentially had to back that debt,” Eric LeCompte, executive director of Jubilee USA, told IPS.

The Irish government struck a deal with ECB and the Central Bank of Ireland for Anglo to receive funding to repay debts, but without sufficient collateral, the Irish government created a “promissory note,” an unconditional promise, to pay for the liability.

“To put these repayments in context, 30.6 billion (euro) is equivalent to just under 20% of Ireland’s current GDP or 17,000 (euro) for each working person working for pay or profit in the State. 47.9 billion (euro) is 30% of Ireland’s current GDP,” Debt Justice Action, a coalition of organisations from Ireland and elsewhere against unjust debt payments, stated on their website.

The Irish government is scheduled to pay 4.1 billion dollars to the ECB on Mar. 31, which the activists say shouldn’t happen because the debt is illegitimate.

“Four point one billion dollars could pay for funding (Ireland’s) entire primary school system for a full year, (but) it will instead be paid into the Central Bank, be deducted from its liabilities and, effectively, be destroyed,” Jubilee USA wrote in a statement.

To pay off this debt, the Irish state will “essentially drain real money from the economy” with enormous impacts on people’s lives, especially women, Nessa Ní Chasaide, coordinator of Debt and Development Coalition Ireland, told IPS.

“Women often bear the brunt of unjust debts. In Ireland, services for children with special needs are being cut, benefits for single parents and vital community projects are being closed down that are key social supports for women in Ireland,” Chasaide added.

Some have raised concerns over the Irish defaulting on a debt, LeCompte said. Also, the international financial institutions and the banking community expect countries to pay off their debts.

“Essentially, there’s always concern about not paying a promissory note. But since the debt is unjust, illegitimate, there are greater risks to the Irish population for not entering negotiations to end this debt,” LeCompte told IPS.

“Even the situation in Greece, which is still very problematic, these kinds of negotiations have happened. Ireland is in just as bad of a spot, but they haven’t had any negotiations. We are calling upon the Irish government to practice common sense for a debt that’s not even being paid to an actually existing entity.”

Up until recently, illegitimate or unjust debts – loans in violation of human rights or rules of fairness, harmful to environment, given to oppressive governments, or intending to exploit in general – mostly impacted developing countries, or the Global South.

Now the same failed financial policies of the banks and International Monetary Fund that plagued the Global South has moved to the Global North, to Ireland, Iceland, Spain and Greece, LeCompte said. A situation similar to Ireland happened in 2008 in Ecuador.

“Ecuador had three billion dollars in loans from IMF, and the Ecuador government said ‘This debt is illegitimate; it was given to corrupt prior regimes, we are not going to pay it.’ That forced international financial institutions into negotiations,” LeCompte said.

The Irish government should follow similar suit and enter into negotiations with ECB, he added.