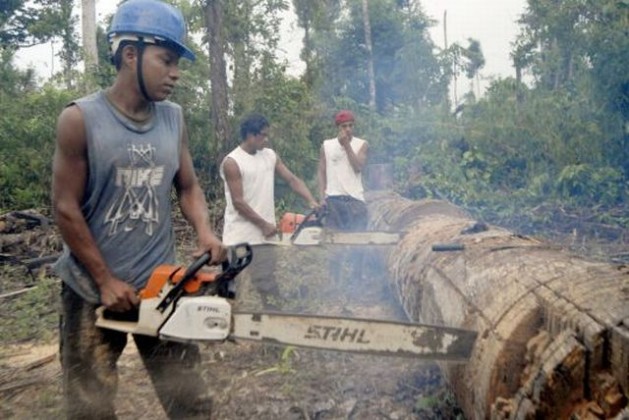 RIO DE JANEIRO, Mar 7 2012 (IPS) - There is every indication that major disasters could be the new midwives of history. Seeking to prevent them, the green economy aims to reduce “environmental risks” and “ecological scarcities” while improving human well-being and social equity.

These are the stated goals of the Green Economy Initiative, launched in 2008 by the United Nations Environment Programme (UNEP).

The adoption of a green economy public policies, regulations, incentives and international agreements could not only help reverse environmental degradation, but also foster greater economic growth than is possible under the current “brown economy”, claims UNEP.

Among other benefits, a green economy leads to more efficient use of energy and natural resources and better management of water, waste and infrastructure. The required investment is estimated by UNEP at around 1.3 trillion dollars annually, or two percent of global gross domestic product (GDP).

But according to Fernando Cardim de Carvalho, a retired professor of economics from the Federal University of Rio de Janeiro, all of this is “more packaging than content,” because alternatives to the current economy lack the scale needed to live up to the expectations raised. They are limited to specific, isolated experiences and “gradual measures that are insufficient to sustain a wave of investment,” he told Tierramérica*.

The world’s primary energy sources continue to be oil, hydroelectric power and, to a lesser degree, nuclear power, while alternative sources like wind and solar power are still too incipient to “move the world,” he said. This is why Brazil, despite its role as a world leader in agrofuels, is placing priority on the deepwater hydrocarbon reserves recently discovered off its Atlantic coast.

The problem is that “capitalism does not operate looking at the long term; innovations have to offer the possibility of immediate profit,” he maintained. This obviously places the green economy at a disadvantage, which means it is not currently considered a viable solution to the financial crisis currently affecting the wealthy countries and threatening the rest of the world, he added.

“A major environmental disaster, unimaginable today,” could change this scenario, suddenly altering the perception of “the cost/benefit relation between environmental degradation and modern comforts,” he noted.

But for the moment and in the foreseeable future, “there is no coalition of plaintiffs” that could successfully move governments to adopt initiatives for radical change, he believes.

The alternative is to continue with the process of “marginal change”: local and sector-specific changes where the situation makes them unavoidable, as in the case of transportation in mega-cities like São Paulo or New York, he concluded.

For his part, Australian environmental activist Paul Gilding, a professor at Cambridge University in the UK and author of the book “The Great Disruption”, believes that the exhaustion of the planet’s resources will inevitably lead the collapse of the world economy in the next decade, marking an end to the search for unlimited growth and ushering in a new era of greater sustainability and less consumption and waste.

Today, even Brazilian economists known as advocates of a market economy now recognize that the current model of production is unsustainable, because it has surpassed the planet’s ecological limits.

André Lara Resende, a champion of anti-inflation and privatization programs in the 1990s, stated in an article published Jan. 20 in the Brazilian newspaper Valor that the economic crisis that hit the United States in 2008 has probably persisted because we are reaching “the physical limits of the ecosystem.”

The current crisis, he believes, is not merely a repetition of the cyclical crises of capitalism due to insufficient demand, but rather a demonstration that the artificial expansion of demand for consumer goods prescribed by British economist John Maynard Keynes (1883-1946) is no longer effective or feasible.

Eduardo Gianetti da Fonseca, author of numerous books on economics and sociology, maintains in the same article that the “serious market failure” of excluding environmental costs from pricing systems is leading to a climate change disaster and the exhaustion of the world’s natural resources.

But UNEP insists it is a “myth” that there is an inescapable trade-off between environmental sustainability and economic progress. It says there is “substantial evidence” that green economies can generate both wealth and employment. Another myth, disproven by successful examples in the developing world, is that a green economy is a “luxury” only wealthy countries can afford.

In the report “Towards a Green Economy: Pathways to Sustainable Development and Poverty Eradication”, UNEP defends “the greening of economies” as “a new engine of growth” and “a net generator of decent jobs” as well as “a vital strategy for the elimination of persistent poverty.”

The policies and measures advocated in the report are accompanied by examples of proven initiatives. Among these, the reduction or elimination of harmful subsidies plays a key role.

Sums like these demonstrate that there is money for investment in environmental programs, observed Rubens Born, director of Vitae Civilis, a Brazilian non-governmental organization that actively works on the issue of climate change.

But reducing these subsidies and thereby raising fuel prices is a risky undertaking. In Bolivia, an increase in petroleum derivative taxes from 72 to 82 percent in December 2010 unleashed a wave of protests that forced President Evo Morales to backtrack on the decision, a move that politically weakened him.

Nigeria has also faced fierce reaction over the decision to eliminate eight billion dollars in annual subsidies to the oil industry.

But Indonesia successfully adopted similar measures in 2005 and 2008, by compensating millions of low-income families affected by higher fuel costs through cash transfers provided for one year. In Gabon, the impact of subsidy reform was offset by using the liberated revenue to fund microcredit programs for disadvantaged women, while Ghana allocated extra funds to education and health care in the country’s poorest areas, according to the examples highlighted by UNEP.

Meanwhile, in Bangladesh, Grameen Shakti (Grameen Energy, in English), capitalizing on the microcredit network and experience of the Grameen Bank, provides soft credits to make solar power home systems affordable to rural populations. By the end of 2009 more than 320,000 of these systems had been installed, and the organization’s goal is to reach a million households by 2015.

Preferential pricing to promote the use of renewable energies, already implemented in 47 countries, is another example highlighted by UNEP, along with the recycling of 95% of aluminum cans in Brazil.

The green economy will be the central theme of the United Nations Conference on Sustainable Development, which will bring together heads of state and government in Rio de Janeiro on Jun. 20-22. The conference is better known as Rio+20

, so named because it is taking place 20 years after the historic 1992 Earth Summit also held in Rio de Janeiro.

During the nine days prior to the conference itself, preparatory and civil society meetings will draw tens of thousands of participants to this Brazilian city.