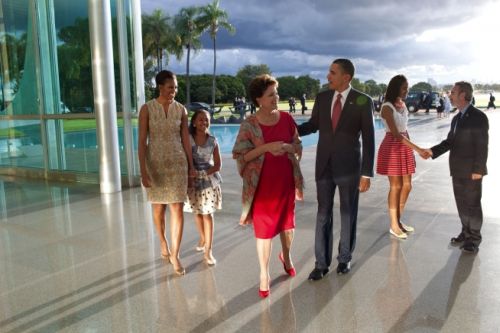 WASHINGTON, Apr 9 2012 (IPS) - Kicking off what some here have called President Barack Obama’s “Latin America Week”, the president and his Brazilian counterpart, Dilma Rousseff, touted a deepening of bilateral ties in her first visit to the White House as president of South America’s superpower.

Adding to a growing basket of “presidential dialogues” that were sealed during Obama’s visit to Brazil in March 2011, the two leaders announced the creation of a “Defence Co-operation Dialogue” that will convene in the Latin American giant in two weeks.

According to the seven-page communiqué released during the two presidents’ lunch, the new dialogue will identify “opportunities for collaboration on defence issues around the globe”.

The two leaders also announced the signing of a new civil-aviation accord and the opening by Washington of two new U.S. consulates in Belo Horizonte and Porto Alegre to facilitate travel by Brazilian businesspeople and tourists to the U.S.

Indeed, most of Monday’s summit meeting, which precedes by just a few days the multinational Summit of the Americas in Cartagena, Colombia Apr. 14-15, dealt with issues on which the Americas’ two most populous nations have been moving steadily to intensify their bilateral relations – business, energy, and education.

“We seek to be a partner, an equal partner, to promote sustainable, diversified, innovation-driven growth that translates into inclusive, long-lasting progress,” Secretary of State Hillary Clinton declared during a morning address to the U.S. Chamber of Commerce, which hosted an all-day forum on U.S.- Brazilian economic ties at which Rousseff herself was to speak later in the day.

“We want, together, Brazil and the United States, to work toward creating economic opportunity, a system in which everyone has a fair chance to compete,” she added.

While the emphasis on both sides Monday was on the positive, the summit could not escape a mutual sense of disappointment in how relations have developed during Obama’s presidency.

Washington had clearly hoped that, under Rousseff, Brazil would move much closer to the U.S. on a wide array of global and regional issues than had been the case under her charismatic predecessor, Luiz Inacio Lula da Silva.

Indeed, his trip to Brazil last year so soon after Rousseff’s inaugation was widely seen as a deft move to gain her favour in that it reversed a tradition of new Brazilian leaders making a ritual pilgrimage to Washington to gain its blessing.

Lula, who complained just before leaving office that “nothing has changed” under Obama in Washington’s relations with Latin America, had clashed openly with the U.S. president over the 2009 d’etat in Honduras, Brazilian-Turkish efforts in 2010 to mediate a settlement over Iran’s nuclear programme, and his failure to more aggressively lift the 50-year-old trade embargo with Cuba

And, while Rousseff, whose focus has been mostly on domestic issues, has shown less interest than Lula in confronting the U.S. on geo- strategic questions – for example, by abstaining on Western-backed U.N. resolutions on the Middle East rather than voting against Washington – the changes have not been as great as the administration had hoped.

“The Brazilians believe these has been less of a divergence (between them and the U.S.),” said Peter Hakim, president emeritus of the Inter-American Dialogue, a hemispheric think tank here. “But the (Brazilian) policy is largely one of continuity.”

For their part, the Brazilians have expressed disappointment in a number of areas, particularly Washington’s failure to date to support Brazil’s bid for a permanent seat on the U.N. Security Council, as Obama did for India in November 2010.

Indeed, the fact that Indian Prime Minister Manmohan Singh was accorded the honours of a state visit on that occasion – in contrast to the White House luncheon that Rousseff was given Monday – only adds to the sense that Brazil, despite its regional superpower status and its full membership in the BRICS group that includes Russia and China, as well as India, is not yet taken seriously here as a global player.

“The fact that Brazil is not a nuclear power and that South America is not a relevant strategic hotspot should count in favour of Brazil’s aspirations (for a permanent seat), not against,” wrote Augusto de Castro Neves, a Latin America analyst at the Eurasia Group here, in a foreignpolicy.com article last week.

In Monday’s communiqué, Obama merely “reaffirmed his appreciation for Brazil’s aspiration to become a permanent member of the Security Council and acknowledged its assumption of global responsibilities.”

“The U.S. should treat Brazil much more like it does India and China,” Castro Neves said, adding that Washington’s failure to recognise Brazil’s growing global influence “keeps the two countries’ agenda much less ambitious than it should be.”

While neither Rousseff nor her foreign minister, Antonio de Aguiar Patriota, complained directly about Washington’s attitude, Patriota stressed in his presentation to the Chamber Brazil’s “unique comparative advantage in (the) emerging world order” as a “country devoid of mass destruction, a peace-loving country, a country that believes in diplomacy, in dialogue, in tolerance.”

In a brief public appearance with Obama after lunch, Rousseff also complained about U.S. and European low-interest monetary policies designed to make their exports more competitive and thus “impairing growth outlooks in emerging countries”, including Brazil. She has previously warned that such policies will cause a “monetary tsunami” for countries like Brazil whose higher interest rates attract currency speculators.

Indeed, Brazil’s balance of trade with the U.S. has moved sharply negative – from a 6.4 billion dollar surplus in 2007 before the financial crisis the following year to a deficit of 8.2 billion dollars in 2011.

Nonetheless, both leaders touted the fact that the growth in bilateral trade – an average of almost 10 percent per year over the past decade to a record 74 billion dollars last year – even as China displaced the U.S. as Brazil’s number one trade partner.

Washington has taken some steps to please Brazil on the trade front over the past year, including ending certain kinds of subsidies on ethanol production here and lowering tariffs on Brazilian ethanol, although, since the discovery of huge oil and gas deposits off Brazil’s Atlantic coast, the ethanol issue does not loom as large in bilateral relations as it has in the past.

In their remarks, both leaders alluded to their common interest in co-operating on extraction of those resources.

Washington also hopes Brazil will buy a fleet of Boeing F-18 warplanes in a deal worth close to four billion dollars, but that is unlikely to proceed unless the U.S. Air Force follows through on a recently suspended agreement to purchase Embraer training aircraft for the embryonic Afghan air force. Monday’s announcement that Boeing and Embraer have worked out a cooperation agreement may facilitate both transactions, according to business analysts.

Rousseff’s visit here did not come off without some protest. About 100 activists associated with Amazon Watch turned out at the Brazilian embassy here early Monday to highlight recent complaints by Brazilian civil society groups over the killings of indigenous people and small farmers in land disputes in and around the Amazon rainforest and Rousseff’s alleged failure to implement land reform and promote sustainable agriculture.

They also protested pending legislation that allegedly would weaken protections of the forest and the continued construction of the controversial Belo Monte dam along the Xingu River.

Meanwhile, the Center for American Progress (CAP), a think tank close to the White House, called Rousseff’s decision to participate in a U.S. Chamber of Commerce forum “more than a little confusing”, particularly given Obama’s “snub(bing)” of Brazil’s main opposition party.

“It is tempting to speculate who is advising President Rousseff to visit Washington in an election year and seemingly align herself with an organization that is such a fierce opponent of President Obama and opposed to so much of her own and her party’s political philosophy,” according to an essay by senior CAP aides published on its website.