MÁLAGA, Spain, Apr 12 2012 (IPS) - A group of former political prisoners from Cuba and their family members gathered in Madrid’s Puerta del Sol square and in front of the foreign ministry Tuesday to protest the unexpected cut-off in aid from the government. 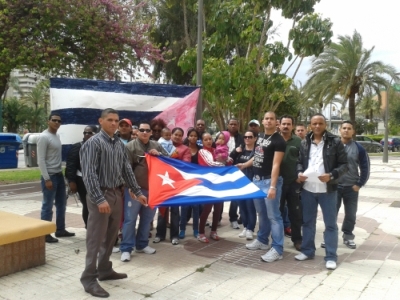 Former Cuban political prisoners gathered outside the governing party headquarters in Málaga to demand an extension of the aid they were receiving. Credit: Inés Benítez/IPS

“They have completely abandoned us,” Juan Antonio Bermúdez, the former vice president of the National Human Rights Federation of Cuba and a former political prisoner and prisoner of conscience, told IPS.

There are “children, elderly persons and pregnant women” among the people affected by the cut-off in economic assistance, he said.

Between July 2010 and April 2011, Spain took in 115 former political prisoners and 647 family members from Cuba, under an agreement between the Cuban government of Raúl Castro and the Spanish government of then socialist Prime Minister José Luis Rodríguez Zapatero.

That programme was extended for six months, until January 2012. But the government of right-wing Prime Minister Mariano Rajoy, who took office in December, did not approve a second extension.

“We have tried hard to find work, but haven’t found any. I don’t know where I’m going to go,” Yanelkys Ordóñez, the relative of a former political prisoner, told IPS as she bundled up her baby in a demonstration last week in the southern city of Málaga, outside the headquarters of the governing Popular Party (PP).

Spain has the highest unemployment rate in the European Union – 23 percent – and is suffering a severe economic crisis that has forced the government to make drastic spending cuts in all areas.

The former political prisoners had been receiving an average of 1,000 euros (1,330 dollars) a month per family, depending on the number of dependents, and the payments were channelled through humanitarian groups like the Spanish Red Cross, the Spanish Catholic Commission of Migration Association (ACCEM), and the Spanish Commission for Refugee Aid (CEAR).

“We are going to make an effort to help them with insertion in Spanish society,” the secretary of state for international cooperation, Jesús Gracia, said Tuesday in the southern city of Cádiz.

Now that the programme for aid to the Cubans has ended, they are facing the same conditions experienced by the rest of the immigrants in Spain, and by many Spanish citizens, Gracia told the state TV station.

Their needs will be studied on an individual basis, he added.

The Spanish government lamented the news, but said du Bouchet’s death had nothing to do with the cut-off in assistance.

“We are very grateful to the Spanish government for taking us in, but we came here under an agreement that has not been fulfilled,” José Luis Rodríguez Chaves, a Cuban dissident who arrived in Spain on Apr. 8, 2011 with a group of 36 other former political prisoners, told IPS.

On Dec. 30, the Rajoy administration announced that it would extend the general assistance programme for refugees and for immigrants in a vulnerable situation. But the 17 million dollars in aid, to be handled by organisations that work with these population groups, were cancelled as part of the sweeping cutbacks made by the government.

Rodríguez Chaves, Julio César Gálvez and other Cubans met Tuesday in Madrid with PP legislator Teófilo de Luis, in search of a solution.

“The legislator told me he would meet with officials to find out the government’s response, and he warned us to stop protesting and to wait,” Bermúdez said.

“The situation is chaotic for more than 80 families, who have been totally abandoned,” he said.

“The wait is driving us to despair, when there are children and people who are ill, who are going to end up on the streets,” he added.

In a communiqué presented at PP headquarters in Málaga, the former political prisoners asked “all European Union member countries to intercede (on their behalf) with the Spanish authorities so that (we) are allowed to move to other countries.”

“If there is no possibility for us to find work here, they should send us to another country,” María Isabel García Reyes told IPS. She said she and her fellow Cubans will have to leave the apartments they are renting “and go and sleep under a bridge.”

In the last year of the Zapatero administration, the payments they were receiving to pay for clothes, medicine, transportation and school supplies were gradually reduced, until the aid was completely cut off in January “without providing time to prepare for this difficult situation,” the statement added.

Randol Roca, another Cuban who lives in Málaga, told IPS in March that since the assistance was cut off, he has had to panhandle on the streets to survive, since he cannot find work.

“There is no work for anyone,” said Rodríguez Chaves. He added that there are many Cuban dissidents who have been unable to get their professional qualifications and degrees validated in Spain.

He said he was forced to go into exile in Spain “under the threat of more years of prison, or the risk that at any moment I would appear in a ditch with my mouth full of ants.”

“They have left us in the streets. We won’t be able to send our kids to school because we have no money for transport,” said Bermúdez.