BAMAKO, Apr 6 2012 (IPS) - As armed groups have captured Gao, Kidal and Timbuktu, the three largest cities in northern Mali, the differences within the alliance have begun to emerge. There are reports of rape and looting in Gao, while in Timbuktu an Islamist faction, Ansar Dine, has announced the imposition of sharia law. 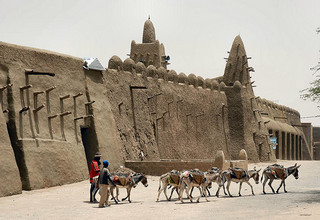 Tuareg rebels have seized Timbuktu and other northern cities in Mali. Credit: Emilio Labrador/CC BY 2.0

As the leaders of a Mar. 22 coup in the capital, Bamako, considered their response to an ultimatum from the regional bloc ECOWAS to step down, events in the north accelerated with the three largest cities passing into the hands of armed groups.

“On the radio, the rebels said they would not harm the civilian population, but they asked women to veil themselves when they go out,” Timbuktu resident Badji Maïga told IPS. “They also asked people to welcome them and arrested those they caught looting.” The Bamako-based weekly La Nouvelle République reported that Ansar Dine founder Iyad Ag Ghali took to the airwaves of Timbuktu’s Radio Boctou to explain the group’s intentions. “Misfortune is due to people’s lack of faith in God, and because they have abandoned the practice of sharia, because we have changed our way of life under the influence of Whites,” he said.

“It is for this reason that there is misery, licentiousness and other ills in our society.”

Ag Ghali also played a leading role in an earlier rebellion in the 1990s, and his group has rapidly gained prominence in the current uprising in northern Mali.

The Algerian consulate in Gao was attacked on Thursday morning by an armed Islamist group. Later in the day, the Algerian government confirmed that the consul and six of his colleagues had been taken away to an unknown destination.

The MNLA rebels on Wednesday announced the end of their military operations, but in Bamako, the political situation remains tense. The military junta had invited all political forces to a national conference on Thursday, but this was postponed after the broad coalition opposed to the coup announced that it would not participate.


According to Mamane Cissé, originally from Timbuktu but now living in Bamako, Ansar Dine captured the city’s military base from its local militia defenders and raised two flags: the green, gold and red of Mali, and the group’s own flag, a black standard with the words “Allahu Akbar” – God is Great – written in Arabic.

If the National Movement for the Liberation of Azawad (MNLA) was already seen as a key actor in the conquest of the north, the fall of Timbuktu confirmed the influence of the Islamist groups Ansar Dine and Al-Qaeda in the Islamic Maghreb (AQIM).

“People spotted many foreigners amongst the Islamists, including Nigerians, Mauritanians and Algerians,” Cissé told IPS.

While the MNLA has said it is fighting for the independence of the northern region, Ansar Dine wants to preserve the country’s present borders, but turn Mali into an Islamic republic under sharia law.

In its Tuesday Apr. 3 edition, Bamako-based daily La Républicain announced that Ag Ghali, in a hearts-and-minds operation, had visited a city hospital to greet the sick and donate medicine. “Shortly after this visit, he sent his troops throughout the city to ask women to wear the veil,” the article said.

This Islamist push worries Malian women who are used to dressing as they please.

“I don’t want to live in a country where which clothes and which hairstyles one wears are controlled,” Kadiatou Samaké, who manages a hair salon in Bamako, told IPS. “That’s why I’m afraid that the Islamists will extend their influence in Mali. Women will suffer if this happens.”

But for the moment, the Islamists have not yet used force to apply their edicts in the north, according to sources in Timbuktu.

The Islamist groups said in Timbuktu that they had come to spread the word of God and not to attack people or their property. But according to Cissé, they have publicly punished four youth caught sabotaging equipment belonging to the national electricity company.

In the other cities under rebel control, women have been targets of a different kind.

“Women are being raped. In Gao, women have been raped in public,” said Al Mahdi Cissé, a member of a collective of people of northern origin, during a march organised in Bamako on Tuesday in support of residents of the north.

Responding to questions from IPS, Kadiatou Sangaré, the president of the National Commission on Human Rights in Mali, condemned human rights violations in the north. “Several women were raped in Gao, while others were taken away.”

Gao’s residents are also facing a food crisis, according to Alassane Touré, a resident who IPS reached by phone on Thursday Apr. 5. “You can no longer buy food here. The rebels have smashed up the shops and the warehouses; they have looted the petrol stations,” he said.