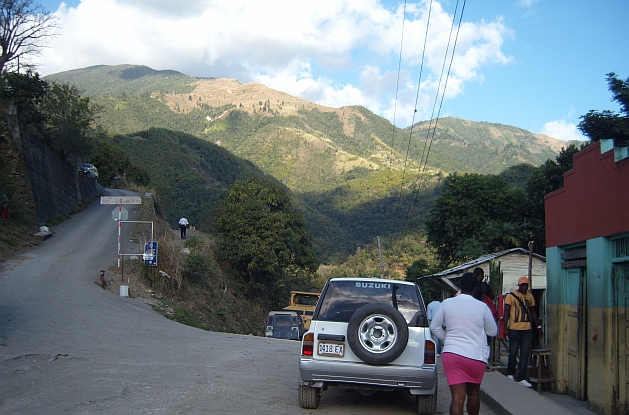 The slopes of the Blue and John Crow Mountains show the signs of deforestation and erosion. Credit: Zadie Neufville/IPS

KINGSTON, Apr 2 2012 (IPS) - A public awareness project that aims to foster wider understanding among locals about the linkages between the global climate and their social and economic wellbeing is Jamaica’s newest adaptation strategy.

Writing in both the First and Second National Communication, local climate experts identified the urgent need for a PAE campaign to target and educate decision and policy makers as well as the wider community about climate change issues.

They noted that an understanding of the problems was key to implementing successful adaptation measures, particularly in relation to the “attitudes, perceptions and lack of information that were key barriers to technology transfer”.

The PAE project has partnered with “Voices for Climate Change,” a national public awareness initiative that utilises the “expertise, talents and influence” of 30 or so established popular entertainers to break down social barriers and educate Jamaicans on adaptation techniques.

The campaign will also include stakeholder consultations, workshops, training sessions and a range of tools to strengthen capacity within government, state agencies and among stakeholder groups.

There is concern that changes to Jamaica's rainfall patterns could have significant impacts on the island's underground and surface water sources.

Head of the Water Resources Authority (WRA) Basil Fernandez was reassuring even in light of reports of reduced rainfall: "Jamaica is not short of water, but we do have problems with infrastructure, it is old and pipes are leaking," he said.

Pointing to recent reports that 70 percent of the water abstracted for domestic purposes was "unaccounted for", the man who controls the use and allocation of the nation's water resources noted: "Unaccounted for water do not necessarily mean all leaks."

"We could be dealing with illegal connections, under metering, no metering at all but we have to get a better handling on that," he added.


Jamaica’s NGO community initiated the Voices for Climate Change project in 2009 with funding from the Global Environment Facility (GEF).

Hoad hopes to increase the PAE’s chances of success by tapping into Voices’ inventive use of culture, music and drama to educate communities about the effects of climate change as well as to reinforce resilience methodologies in high-risk communities.

Speaking at the launch, Minister of Water, Land, Environment and Climate Change Robert Pickersgill, spoke of the national commitment to “have dialogue and communicate at all levels to share information on climate change, its impacts and on appropriate responses to those threats”.

Scientists believe that climate change will amplify Jamaica’s vulnerability to the effects of tropical storms and hurricanes, cause economic fallout, outbreak of diseases and loss of unique Jamaican plant and animal species.

A survey in support of the Second Communication found that less than one third of the islanders knew what climate change was, or the associated risks.

Environmental activists have long argued for adequately funded and consistent public education campaigns to change local perceptions and create an appreciation of nature, the environment and their long-term economic and aesthetic value. Most Jamaicans, they argue, have no idea of the value of the island’s natural ecological resources.

They accuse government of “selling out” Jamaica’s natural wealth by approving massive development projects that call for large-scale alteration of the physical environment.

The touchiest developments have been associated with the 2,560 additional hotel rooms constructed between 2007 and 2010 to support the hotel industry.

The yearlong public awareness plan should address some of these concerns.

According to Hoad, it aims to “educate communities that are vulnerable in both the ecological and economic sense, as well as to educate leaders and policy makers in both the public and private sectors”.

Long overdue, scientists say, because they are already seeing the signs of change.

The 2nd National Communication reported, “Climate change may have already affected the island’s coral reefs. Widespread coral bleaching in 1988 and 1990 has been attributed to the increases in the temperature of coastal waters.”

According to the 2010 State of the Environment report, there are changes along the shorelines of Hellshire Bay, the Great Salt Pond and Half Moon Bay in St. Catherine. Environmental data show that since 2007, more than 40.6 hectares of wetlands have been removed or relocated to facilitate development projects.

It is not uncommon for the authorities here to grant development approvals subject to the creation or restoration of previously degraded wetlands to replace those that have been damaged or removed to facilitate the projects.

In 2008, it was reported that in addition to hillside farming, the biggest threats to the island’s 26 watersheds were poor agricultural practices, squatting and pollution – 10 watersheds are severely degraded.

Conservator of Forests Marlyn Headly told IPS in a recent interview that many farmers cultivate the often thin and erosive soils in some upper watershed areas on slopes of more than of 20 degrees.

Estimates are that more than 170,000 farmers cultivate less than 245,000 hectares using techniques that contribute to massive soil loss and the siltation of waterways.

An increase in seawater temperatures may also have caused the bigger than normal storm surges that destroyed homes in Kingston’s seaside community of Caribbean Terrace in 2004 and 2007.

A major construction project is now underway to raise the Palisadoes road by six feet. The road that leads to Kingston’s Norman Manley Airport has been repeatedly inundated since 2004 when it was made impassable by the sea during Ivan.

Climate experts also say the resurgence of malaria in December 2006 after 40 years of absence may be another sign of a changing climate. More than 400 people in depressed areas of inner city Kingston were affected.

People living along the coast will be most impacted. An estimated 60 percent of Jamaica’s 2.7 million people live less than two kilometres from the shore. Most will lose their homes, livelihoods and incomes as commercial activities and infrastructure are damaged or destroyed by extreme conditions.

Experts and activists are agreed that an uninformed population will aggravate the problems of climate change. Spooner acknowledges that there are challenges ahead.

In 1990, the Intergovernmental Panel on Climate Change (IPCC) estimated that it would take about 462 million dollars, or roughly 197 dollars per person, to protect Jamaica from sea level rise. Today, the cost would be 531.9 million dollars.

The creation of a Climate Change Ministry is seen as affirmation that the new government is committed to the process. A climate change department to coordinate and streamline activities has also been announced.

Spooner also pointed out that Jamaica’s climate fund application was advanced. “It is already before the board. The concept has been endorsed and the government has been given permission to apply for funding,” he told IPS.

“There is need to ensure that an action plan is in place, that a climate policy is developed as quickly as possible and that things are in place so we can start doing what needs to be done,” the meteorologist added.

“The need for public awareness is critical and urgent…climate change is real,” Spooner said.