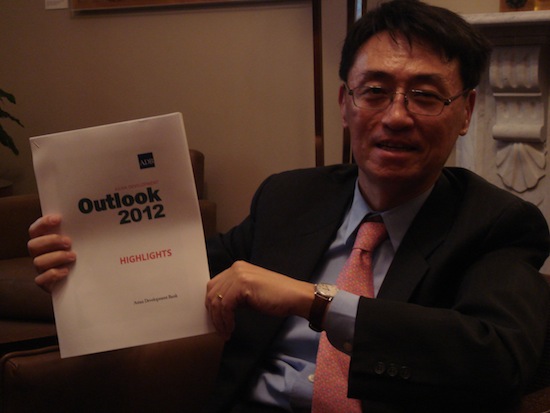 The Manila-based ADB’s 2012 Asian Development Outlook says if the spoils of growth had been more evenly distributed, another 240 million people in the 45 countries that make up developing Asia would have moved out of poverty in the last two decades.

Inequality widened in the three most populous countries – the People’s Republic of China, India, and Indonesia—which have been key drivers of the region’s rapid economic growth.

“A high degree of inequality breeds social tensions between the haves and have nots and tends to generate instability. One of the key ingredients of Asia’s economic growth in the past has been social and political stability and if that is jeopardised, it will inevitably undermine economic growth,” Donghyun Park, one of the lead authors of the report and principal economist at ADB’s Economics and Research Department, told IPS.

For developing Asia, the Gini coefficient – a key measure of income distribution on a zero to one scale, with one representing ‘maximum inequality’ – has leapt from 0.39 to 0.46 in the last two decades. The richest one percent of households accounted for six to eight percent of the total income while close to 20 percent of total income went to the top five percent in most countries.

Technological progress, globalisation, and market-oriented reforms, which have been the primary catalysts for the region’s growth, are said to have been the key forces behind the rise in inequality, particularly between rural and urban areas, and coastal and inland provinces.

“The more educated people are better able to capitalise on technology and that translates to higher income. However, technology can also be deployed to reduce inequality, such as ICT being used to better inform farmers about crops and weather, and ‘e-education’ reaching out to children in remote areas,” Park told IPS.

Unequal access to assets such as capital and land; human capital, such as education and training; and labour and financial markets is common in the region.

“Most Asian governments are very much aware that growing inequality is harmful for their country’s growth and social harmony. However, they have yet to take more concrete and specific measures to deal with this issue,” Park observed.

He suggests a closer partnership between governments and civil society groups for more equitable growth and gives the example of the Saemaul Undong (New Village) movement in South Korea. “The community-based movement was kick-started and then supported and partially funded by the government in the 1960s and 1970s as a result of which the rural-urban divide in South Korea didn’t go as high as in many other countries despite the country’s rapid economic growth,” he said.

The report says from a moderate growth of 7.2 percent in 2011, the gross domestic product (GDP) growth in developing Asia will slow to 6.9 percent in 2012 before rebounding to 7.3 percent next year. The region was shifting towards a “more sustainable long-run growth path” based on strong domestic demand.

But Satyajit Das, an international specialist in financial derivatives and risk management, says the report is “wildly optimistic”. The ADB has cut its forecast from the September projection of 7.5 percent to 6.9 percent.

“I think they have wholly underestimated the downside risks. European problems will get deeper before they get better and that is going to have two effects on Asia: first, the export demand will be much less than anticipated. Secondly, there are countries in Asia, particularly India, (that are) heavily reliant on foreign capital because of their current account deficit and that is going to become more difficult to finance in this particular environment.

“The United States’ recovery is very tepid and their biggest trading partner is Europe. As Europe slows, the U.S. economy is going to slow as well,” he stressed.

Major industrial economies like the U.S., Eurozone and Japan are collectively expected to expand by only 1.1 percent in 2012 and 1.7 percent in 2013.

Das said, “The policy moves that are being taken in developed markets are extremely destructive to Asia. The U.S., the UK, Japan and indeed Europe are now in a mode to monetise their debt and that has several effects on Asia. The first and most direct effect is that all the Asian central bank reserves are held in developed market currencies and there is an enormous loss of wealth is going to occur.”

“The next direct effect is that by pushing down these currencies they are effectively doing two things: One, they are pushing currency upward pressure on the Asian currencies making them less competitive. As most commodities are traded in U.S. dollars, the commodity prices go up (to compensate for the weak currency) and feed inflation in these domestic economies in Asia and that is the basic issue. This is absolutely…willful and malicious,” Das stressed.

The report says that oil-price spikes and volatility in food prices could revive the threat of inflation, but policy makers in developing Asia can refrain from further monetary and fiscal stimulus.

Robust expansion in the resource-exporting economies of Papua New Guinea, Timor-Leste and the Solomon Islands, and strong growth in the tourism-oriented economies of the Cook Islands, Fiji, Palau, and Vanuatu, lifted sub-regional growth to seven per cent in 2011. The Pacific countries have been relatively insulated from the Eurozone crisis.

According to the report, the Pacific is expected to slow to six percent and 4.1 percent over the next two years due to lower resource export revenue, the winding down of infrastructure projects, and lower international agricultural prices.