HAVANA, Apr 3 2012 (IPS) - Pope Benedict XVI’s call for changes in Cuba and the world should also focus on churches, according to members of Cuban civil society who, independently of their beliefs or ideologies, recognised the impact of the pope’s visit to this socialist country. 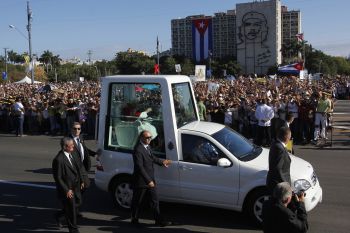 Convinced that many people “will not yet fully comprehend” the real importance of the pope’s Mar. 26-28 visit to the island, Reverend Raimundo García told IPS that the Catholic Church is demonstrating its power of renewal “amidst very complicated circumstances.”

“It is evident that Cuba increasingly does not match the image that many have of it being frozen in space and time,” the retired pastor of the Presbyterian Reformed Church in Cuba added, via email.

García, who is also director of the Christian Centre for Reflection and Dialogue in Cuba, acknowledged what he called the Catholic Church’s “capacity for dialogue” with the government. “This might be the right time to reach out,” said the retired pastor, who is one of the promoters of an incipient inter-religious dialogue in Cuba.

Fourteen years after Pope John Paul II’s visit, which was considered a turning point in relations between the Catholic Church and the Cuban state, Benedict found a society that is increasingly heterogeneous, Catholic intellectuals Roberto Veiga and Lenier González acknowledged in a joint response to questions from IPS.

According to the editors of Espacio Laical, a magazine of the Havana archdiocese’s lay council, by outlining “how much remains to be done to achieve a better country,” the pope promoted truth and life, marriage and the family, freedom and justice, dialogue and social inclusion, forgiveness and reconciliation.

The “challenge” of this proposal, they added, consists of the need for “a methodology of relating to and accompanying an extremely diverse society, in which movements are taking shape that defend agendas related to religious, environmental, immigration, sexual orientation, gender and political issues.”

In addition, they said, there is the challenge of including “Cubans on the island and in the diaspora.”

“Some émigrés do not want any ties with their homeland or political groups, on either end of the spectrum, and do not agree with dialogue and consensus as a methodology for building the country,” the two editors said in their response.

The word “dialogue” is at the centre of many analyses on this issue, including among communists and sexual rights activists, such as Dr. Alberto Roque, who published an article on his blog, HOMO@sapiens.cu, questioning whether or not the Catholic Church also “perceives itself as part of the world” that must change.

In an email to IPS, Roque said the changes needed include the Church’s willingness to modify its positions on abortion, homosexual relationships and women’s subordination, and to eliminate its fundamentalist influence on certain governments.

“Religious believers and all churches should be part of a dialogue that will improve the nation that we want,” Roque said.

Taking a more critical stance, feminist blogger Yasmín S. Portales told IPS that with the current “strengthening of the Cuban Catholic Church’s political positions,” it is becoming the “government’s only interlocutor,” a situation that is generating “tensions within civil society” by undermining the legitimacy of other actors.

For Portales, author of the blog En 2310 y 8225, one of the results of this tendency could be “an increase in obstacles for the struggle against discrimination on the basis of sexual orientation and gender identity, and a threat, in the medium or long term, to the Cuban state’s commitment to defend the sexual and reproductive rights of all its citizens.”

However, only a minority of those who participated in an informal survey conducted by IPS on the social networking site Facebook said the Catholic Church could have a real impact on the rights achieved by the Cuban population decades ago, such as free, safe abortion and birth control.

But the situation could be different in the case of rights yet to be won, such as current proposals for legal reforms to benefit sexual minorities, which from the outset make concessions to the most conservative and patriarchal sectors by proposing legal unions instead of marriage, and excluding the possibility of adoption.

Along those lines, physicist and blogger Rogelio M. Díaz, creator of the blog Bubusopia, referred in a conversation with IPS to what he said was a stepping-up by the Catholic Church of “discourse that monopolises all spirituality and ethical and family values, as opposed to other possible positions.”

For her part, journalist Dixie Edith said the revival of values that were hit hard by the economic crisis of the 1990s must not involve a bolstering of patriarchy. “The family is in crisis, but the solution is not to return to the past; it is finding new and more equitable forms and relationships,” she told IPS.

Opinions expressed on Café 108, a participatory section of the IPS website in Cuba, highlighted the stronger relations between the Catholic Church and the state, the support for changes needed on the island, and for national reconciliation, and condemnation of the economic sanctions imposed by the United States more than 50 years ago.

Moreover, there were more than a few reminders that Cuba is not a Catholic-majority country; it has a large number of religious believers of all types, and of atheists, which is why certain spaces for dialogue and social influence should not be reserved for a single church, or dominated by it.

In that sense, Roberto Méndez, a consultant with the Vatican’s Pontifical Council for Culture, told IPS that the pope preferred to limit his public comments to the ethics that derive from Christian tradition, and that “can be a bridge of understanding between believers and non-believers.”

“It should not be expected that this visit in and of itself will bring spectacular changes to social and political life; that is a question for the Cuban people themselves. However, I do think that it will significantly help Church-state relations and strengthen the Catholic presence in public life,” he said.