Stories written by Dalia Acosta
Dalia Acosta joined IPS in 1990 as a contributor and has been the IPS Correspondent in Havana since 1995. Dalia received her degree in international journalism from the State Institute of International Relations in Moscow in 1987. She worked for the Cuban newspapers Granma and Juventud Rebelde, where she specialised in investigative journalism related to women, minorities, AIDS and sexual rights. In 1991, she began working for the Servicio de Noticias de la Mujer (SEM). In 1990, she received the Tina Modotti Journalism Award and two years later she won the National Journalism Award for an article on the rock music community in Cuba. Currently she alternates her IPS work with an academic investigation of homosexuality in Cuba. | Web 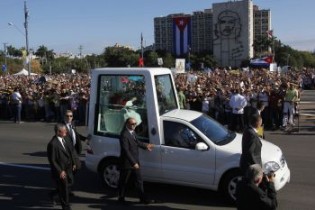 By Dalia Acosta
Thirteen hurricanes, three of which had a major impact on housing; increased access to goods and services; and the start of the so-called "updating" of the country’s economic and social policies are a few of the aspects that make Cuba different from what it was a decade ago.

By Dalia Acosta
Promoting the first Men for Non-Violence platform is one of the challenges undertaken by a group of social actors who devoted November and December 2011 to the most intensive Cuban campaign ever against gender-based violence.

By Dalia Acosta
Whether or not they live in Cuba, whatever their political affiliation, most people consulted by IPS want changes to Cuban migration policy that include three key elements: freedom, rights and normalisation.

By Dalia Acosta
Farmers and experts on agriculture from Haiti, Guadeloupe and Martinique are touring fields in Cuba this week, along with local colleagues, to exchange experiences to foment ecological fruit growing on Caribbean islands.

By Dalia Acosta
Communist Party militant, gay rights activist, journalist and blogger Francisco Rodríguez has triggered an online debate in Cuba by calling for sexual diversity to be identified in the next census, due in September 2012.

By Dalia Acosta
At 19, Liz Sandra Falcón had never imagined that every decision she made could have an impact beyond her own life: not only on people close to her, but on Cuban society itself, and even – although it might seem like an exaggeration – on global tendencies.

By Dalia Acosta
Continuing its mission to promote gender studies and use academia to demonstrate the inequalities between women and men in Cuba, the Women’s Studies Department is celebrating 20 years of work with new challenges in terms of researching and drawing attention to the disadvantages faced by the female population.

Human Development from a Cuban Perspective

By Dalia Acosta
Excluded from the 2010 Human Development Index, Cuba will issue a report of its own, which will reflect the impact of an economic crisis that has lasted for 20-plus years, and will show social and health indicators typical of the developed world.

No Birds Sing in Monoculture “Forests”

By Dalia Acosta
Artificial single-species forests are expanding fast in countries of the developing South, fuelled by low production costs and incentives from governments, and causing severe social and environmental impacts, warned experts from around the world who met this week in the Uruguayan capital.

By Dalia Acosta
People are packed like sardines on the sand and in the water. Like every summer in Cuba, tens of thousands of Havana residents seek to escape the heat and worries of city life every day along a 12-km stretch of popular beaches to the east of the capital, known as Playas del Este.

By Dalia Acosta
They get ready for the jump, a spectacular airborne pirouette follows and then a stream of saltwater spray rounds off the plunge. Dozens of youngsters, mainly boys, cool off from the summer heat with daring dives from the sea wall lining the Malecón, the Cuban capital's famous seaside avenue.

By Dalia Acosta
Nearly four years after realising her dream of changing her body into a woman's to match her transgender identity, Wendy Iriepa rode through the Cuban capital in a vintage convertible, wearing a stunning full-length white bridal gown and unfurling a rainbow flag, the symbol of the sexual diversity movement, for all to see.

By Dalia Acosta
"I want to meet @salvatore300 and @elainediaz2003" was a comment overheard at #TwittHab, the first meeting in Cuba of social network users. After years of being connected only via the web, the internet is now being used to facilitate real-world contact between citizens of this socialist island nation.

By Dalia Acosta
Despite the many limitations on access to digital-age technology in Cuba, a taste for computer games is spreading in this country, giving rise to a youthful movement that is beginning to conquer new public spaces.

By Dalia Acosta
The idea emerged spontaneously, and then snowballed. In just a few months, more than 100 people in Cuba became part of a young people’s social network for diversity, in a society where machismo and homophobia are seen as natural.

By Dalia Acosta
Women in Cuba are gaining ground in public life and earn the same wages as men. But the gender gap in the workplace is still a challenge for women, who are finding the odds more heavily stacked against them as the government of Raúl Castro adopts economic reforms aimed at "updating" the country's socialist system.

By Dalia Acosta
The family history of writer Manuel Martínez rises up in large, black letters on the walls and ceilings of his house in a low-income neighbourhood of the Cuban capital. Photos and objects from times past complete this different kind of a book, which you can start reading from any point.
Next Page »
ADVERTISEMENT ADVERTISEMENT