HAVANA, Jun 4 2011 (IPS) - The family history of writer Manuel Martínez rises up in large, black letters on the walls and ceilings of his house in a low-income neighbourhood of the Cuban capital. Photos and objects from times past complete this different kind of a book, which you can start reading from any point. 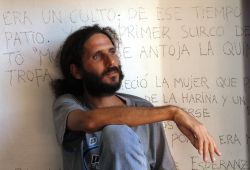 Manuel Martínez wrote the book, and he and his family opened up the house and yard to the community. Credit: Jorge Luis Baños/IPS

Cuban flags, the little shoes Martínez’s mother used as a child, the inner assembly of a piano, loose pages of Granma, the newspaper of the Cuban Communist Party, rock music albums and countless photos and mementos comprise this book, which does not need a printing press to reach readers.

Its paragraphs even invade the bathroom of the family, made up of Martínez, his wife Yamilka Velásquez, and their seven-year-old daughter Sarah Jane, and tell the story of how Juan Pérez, an upright Mambí (the name of the rebels who fought Spanish colonialism in the 19th century) settled down on the land of what is now their home.

The book that covers every free inch of the house because “Who would have published a story like that?” narrates how this area of Havana was populated: “They arrived one morning at Concepción Street, which was not yet a street, just a beaten track along an embankment. They found some shade to sit down in and imagine what kind of yard they would have and to weep with joy at their good fortune.”

Pérez was the great-grandfather of Martínez, a playwright and coordinator of the Coco Solo Social Club sociocultural project. Pérez, his wife Evangelina Prieto-Solís, and several of their friends’ families settled down in the early years of the Cuban Republic on the land surrounding the yard that now houses this citizens’ initiative.

Located in Coco Solo, a neighbourhood that has been categorised as “marginalised” in the Havana municipality of Marianao, the spacious area that harbours the family’s two houses opened up to the whole neighbourhood in 2009 for parties that were completely free of charge, and little by little, almost without meaning to, became the most important place in the community.

The idea emerged “without intentions or methodology” Martínez explained to IPS, as he gazed at an improvised, open-air theatre with recycled lights and curtains. It was right there that the name appeared in an almost ironical reference to the Buena Vista Social Club project, which in 1996 rescued a group of Cuban master musicians from oblivion.

The yard, once full of crops to put food on the family table and the exotic plants of the writer’s late grandfather, turned into a community space after neighbours spontaneously joined in the first party organised by a group of friends, and it became a regular event.

“We all got together – actors who no longer belonged to any theatre group, musicians who weren’t composing music, and magicians who weren’t doing magic,” Martínez commentsed. “We put together a show and everybody came.” They organise their activities on holidays so as not to disturb anyone’s rest, with their noise.

With a homemade caldosa (popular Cuban stew based on tubers and meat), the celebration begins, including activities for children and young people, adults and seniors. This alternative is especially appreciated in a city where recreational spaces tend to be scarce in places that are not centrally located.

The first party they organised as a project was a concert with the rock band Magical Beat, led by Luis Manuel Molina. Since then, the scope of the Coco Solo Social Club has broadened, and it now has support from the local government.

“When officials from the Marianao Municipal Culture Department found out, they were surprised and came for a visit to see how we had managed it. When they saw that we didn’t charge anything and that it was a wholesome environment, they joined the party,” Martínez recounts.

“People don’t understand why it’s free,” commented Caridad Pérez, Manuel’s mother, in a conversation with IPS. She talked about how the self-organised family initiative has gradually gained the support and respect of the community, which joins in, participates, takes care of, and defends the project as its own.

This initiative is especially important at a time when the process of economic reform set in motion by the government of Raúl Castro requires more profitability from the country’s cultural institutions, which for decades had run programmes that were free or subsidised.

The Coco Solo Social Club was, moreover, an alternative for the creative fulfilment of its members in the face of the difficulties involved in finding work as artistes.Those who are part of the project include the experimental group Los Mataflores and the theatre company La Marea, whose venue, the Cero theatre in Marianao, is in danger of collapse.

Martínez plays a character “who is not a man or a woman: it has long hair and a beard and covers itself with a sheet.” Velásquez, in turn, gives classes on music theory, as well as piano classes to children. And all together, they make independent amateur videos with the distinct intention of making people think.

The material is distributed hand to hand on flash drives and CDs, in a system dubbed “the USB market.”

With the spread of digital technology, the Cuban population created these informal, mostly free networks, to socialise local or pirated foreign videos.

For a number of months, the Coco Solo Social Club has been exchanging ideas with the citizens’ group Red Protagónica Observatorio Crítico, which is involved in similar initiatives such as El Trencito, a visual arts workshop for children directed by a Havana family. In March, the Coco Solo yard was the venue for the Critical Observatory’s 5th Forum, an annual event.

“The project is innovative, in that it makes day-to-day life, which can sometimes be difficult, into something beautiful based on each member’s commitment to the community, and by considering as art everything that comes from people’s hearts,” blogger Sandra Alvarez, a participant in this year’s forum, told IPS.