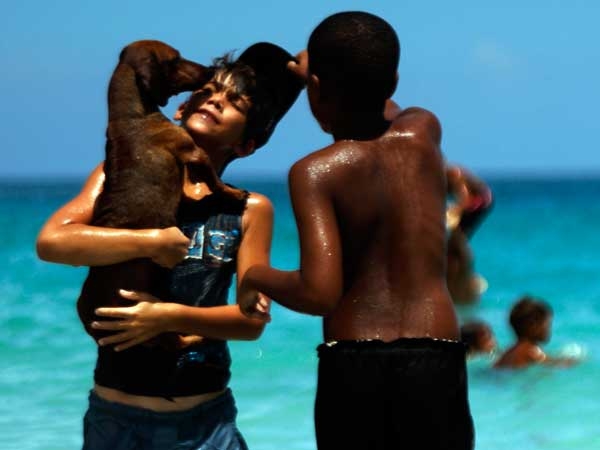 Although pets are banned in some areas, many owners take them along to the beach. Credit: Jorge Luis Baños/IPS

HAVANA, Sep 5 2011 (IPS) - People are packed like sardines on the sand and in the water. Like every summer in Cuba, tens of thousands of Havana residents seek to escape the heat and worries of city life every day along a 12-km stretch of popular beaches to the east of the capital, known as Playas del Este.

“When I was a teenager, I used to come with my friends every day in July and August as soon as school was out and until we had to go back. Now transportation is more difficult and the beach is not as nice, but even so, I can’t stop coming,” Liana Méndez, a 36-year-old professional, told IPS.

Méndez, like many Cubans, schedules her summer vacation to coincide with the school holidays. “We rent a private house for the whole family for a week, or we come whenever we can on the bus, by taxi or on the train to Guanabo,” she added.

Up to 200,000 people a day crowd the beaches to the east of Havana, a veritable invasion that overburdens the public transport system and affects the lives of the area’s 25,000 year-round residents.

For over 30 years, the Havana provincial transport authorities have added additional buses to the beach routes. But for more than a decade, those efforts have been concentrated on Guanabo, a community with few state offerings for foreign tourists and a high concentration of Cuban beach-goers.

Every August, departures are scheduled from the Havana central railway station for a five-carriage Guanabo-bound train with a 300-seat capacity. “Sometimes it’s scary to see how many people get off that train in the morning,” said María Díaz, who lives in Guanabo’s La Conchita neighbourhood.

Like her neighbours, Díaz places a sign on her door to keep visitors away: “No water, no bathroom, beware of dog.” There are families, however, who for years have made a living from providing summertime services, from doing brisk business renting rooms or houses to selling drinking water.

“One family here built their home by selling tamales on the beach. It took them about 15 years, but they did it,” Díaz commented.

On the Guanabo train, groups of young people chat boisterously as a mother nurses her baby, who will bathe in the sea before his first birthday. There is no lack of the traditional peanut and candy sellers, or police, who try to keep order during a time when social problems are mounting due to alcohol consumption.

At the end of the day, signs of the “human flood” are everywhere: the remains of food, beer cans, plastic bottles and bags, condoms, rum bottles and other rubbish are strewn across the sand, despite the rustic garbage cans distributed along the beach.

At night, the waves drag some of the waste from the beaches into the sea.

When the sun is high in the sky at noon, university professor Tania González, 46, and her husband, Ricardo Herrera, 48, look for shade. They decided to take the bus to leave early in the morning from the Havana district of 10 de Octubre with their two children, Liz and Adrián, on a journey that can take hours because of the transport crisis.

“Some parts of the beach are in quite bad shape,” said González, who remembers the “green-blue” colour of the water when her parents would bring her as a child. Palm trees and other coastal vegetation are scant after years of construction of homes and service facilities along the shore. And the coastline retreats almost one metre a year due to erosion.

For almost two decades, the dunes were covered with stands of casuarinas, or Australian pines, which are not native to the area. They were cut down between 1981 and 1985.

Both of those mistakes have contributed to coastal erosion and the shrinking or outright disappearance of the dunes, according to a study by the government-run Cuban Oceanology Institute.

Published as part of a 2010 oceanology series, the article by a group of authors led by geologist Magalys Sosa found that “in the last 27 years, the Playas del Este have evolved toward the restoration of the original morphology of dunes.” But more must be done to restore the area’s ecosystem, she said.

“We came early and we’re leaving early. It is not recommendable to be under the sun at noon and during the afternoon. There are hardly any palm trees, and the few we saw were far way,” Adanet Rodríguez, a 15-year-old student, told IPS. Unlike previous generations of young people, she is beginning to be aware of the dangers of excessive tanning.

Studies by the Cuban Centre for Engineering and Environmental Management of Bays and Coasts warn that the main source of pollution is faeces, which is poured into the ocean through sewage discharge and rivers like the Guanabo and Itabo. Likewise, toxic substances from oil spills have been found in coastal waters.

The local population loves the beach. Several environmental projects have emerged in these areas, such as the now-defunct 2006 Sibarimar Committee of the Cuban Society for the Protection of the Environment/Pronaturaleza.

From 1994, this group had promoted participatory and community management of the area, along with environmental education.

Since the project came to an end, however, “only brief environmental actions have been carried out” in the area, Ángel Valdés, president of Pronaturaleza, told IPS.

In 2012, a new environmental initiative should benefit the town of Guanabo and 30 other coastal communities nationwide, the activist announced.