HAVANA, Aug 31 2011 (IPS) - They get ready for the jump, a spectacular airborne pirouette follows and then a stream of saltwater spray rounds off the plunge. Dozens of youngsters, mainly boys, cool off from the summer heat with daring dives from the sea wall lining the Malecón, the Cuban capital’s famous seaside avenue. 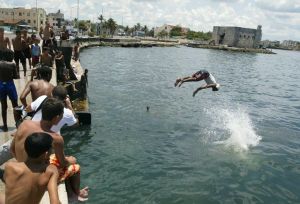 Most of those diving off the Malecón seawall are young men and boys. Credit: Jorge Luis Baños/IPS

The photogenic scene is repeated every summer at different points along the avenue, which was built with many difficulties between 1901 and 1958.

The Malecón features a broad sidewalk ending in a thick wall of concrete that runs along eight kilometres of coastline, from Havana Bay to the city’s largest river, the Almendares.

The waves crash hard and unskilled swimmers can be slammed against the reef, banged up, scraped or even killed. “They say that this is where the sewers empty out. But swimming off the Malecón is something normal now,” Deinar, a 29-year-old kitchen assistant who has brought her young son along to swim, comments to IPS.

The largest number of bathers gathers at the intersection of Paseo del Prado, where the reef has natural swimming holes, a favourite spot for children who splash around and older women who dip their toes. The teenagers and young men, meanwhile, continue their dives, with the most daring jumping off the top of the wall.

The ruins of early 20th century resorts can still be seen. They were created when these coastal waters were still crystal clear, and demolished to build the seawall. It was not until after 1990 that the custom of swimming off the Malecón returned as a result of the economic crisis and a lack of transportation for visiting the beaches 20 kilometres east of the city.

Before diving in, 19-year-old accounting student Yulian Lara chats with IPS. Every summer he comes to the area to swim because “it’s closer to home. A lot of people go to the eastern beaches in the summer and problems come up (violence and fighting). Here, I have no problem with transportation,” he says.

A symbol of Havana, the Malecón encompasses three municipalities: Habana Vieja (Old Havana), Centro Habana and Plaza de la Revolución. It is guarded on each end by colonial-era fortresses: the Castillo de La Punta and La Chorrera, which used to protect the city from pirate attacks.

The most popular swimming spot is right at the entry to Havana Bay, where the lack of oxygen in the water made survival of marine fauna impossible.

In 1998, a working group, the GTE-BH, was established to clean up the bay. It charges taxes for port services in order to reinvest in the Havana Bay ecosystem and monitors compliance with regulations aimed at preventing the dumping of industrial waste.

The Luyanó River, which empties into the bay, accounts for almost 90 percent of the contamination that comes from its tributaries. An additional 98 sources contribute industrial waste, but that volume was reduced by 56 percent over the last decade as a result of actions by the GTE-BH.

Since 2008, the bay’s waters have had the minimum level of oxygen needed for life, and pollution has been reduced by more than 74 percent, Yosvany Simón, one of the group’s directors, told reporters in July. Every year, however, at least one environmental accident occurs, such as an oil spill from a ship or from the Ñico López refinery.

Environmentalists Irina Echarry and Erasmo Calzadilla warn that “oil, sewage and industrial waste, all of which are harmful to health, empty into the bay every day.”

Echarry and Calzadilla participated last year in two citizen clean-up efforts, to collect the garbage left by visitors on the reefs of the Malecón, mostly cans, glass and plastic bags.

“Plastic bags and soda and beer cans (which are not biodegradable) are the main contribution by swimmers to costal pollution. We have seen families picnicking on the shore, and because there are no garbage cans on the reefs, waste ends up in the ocean,” the activists said.

Garbage cans do line the sidewalk that runs along the seawall, though, where thousands of people go every day to chat, fall in love, sing and look at the waves.

Along the Malecón, Havana’s most-frequented area, only one sign exists prohibiting swimming and fishing. In the centrally-located Vedado neighbourhood, a group of people dive off the wall across from the Riviera and Melía Cohiba hotels, and further ahead, at the end of the wall, is the second most-popular area, next to La Chorrera, a colonial-era fort.

The Malecón runs to the mouth of the Almendares River, one of the most polluted in the country. According to a 2010 report from the National Office of Statistics, there were 2,017 tons of biochemical oxygen demand – a yardstick of the amount of faecal and other organic material – in the river’s waters that year, up from the 2007 to 2009 totals.

When the sun sets behind La Chorrera fortress, the swimmers start to leave the Malecón, giving way to families, couples in love and groups of people seeking a sea breeze in the hot summer air. They are joined by the fishermen who come every night hoping for a catch.