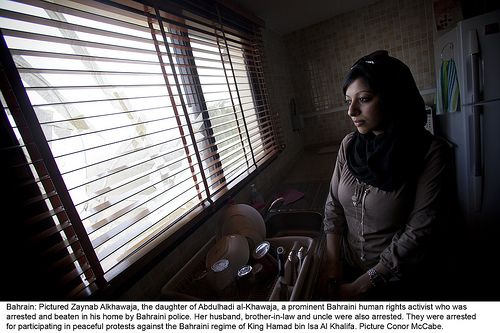 WASHINGTON, Apr 11 2012 (IPS) - The White House Wednesday said it was “deeply concerned” about growing polarisation between the ruling monarchy and the majority Shi’a community in Bahrain and the welfare of a jailed human rights activist who has been on a hunger strike since early February.

“We continue to underscore, both to the government and citizens of Bahrain, the importance of working together to address the underlying causes of mistrust and to promote reconciliation,” said President Barack Obama’s press secretary, Jay Carney, in a written statement.

“In this respect, we note our continued concern for the well-being of jailed activist Abdulhadi al-Khawaja and call on the Government of Bahrain to consider urgently all available options to resolve his case,” the statement said.

It added that the government should “redouble its ongoing efforts” to implement democratic reforms recommended by an independent international commission last November.

While the immediate cause of the statement appeared to be a response to growing pressure from a large number of human rights and labour groups for Obama to intervene in the case of Khawaja, it also reflected increasing concern over the increase in violent clashes between the kingdom’s security forces and youths in predominantly Shi’a communities in and around Manama, the capital, in the absence of movement toward serious dialogue between the government and the main opposition party, al-Wefaq.

Bahrain is home to the U.S. Navy’s Fifth Fleet and occupies a strategic location in the Gulf opposite southwestern Iran.

The violence has reportedly increased over the past few weeks with the approach of next week’s Formula One race on the island -against which protestors have called for a boycott – as well as growing concerns over Khawaja’s deteriorating condition, which has become a rallying point for both the opposition.

Seven police officers were wounded Monday when a bomb exploded as demonstrators just outside Manama gathered to protest the authorities’ rejection of an appeal by the Danish government to release Khawaja to its custody for medical treatment.

“The United States continues to be deeply concerned about the situation in Bahrain, and we urge all parties to reject violence in all its forms,” the White House statement said.

“We condemn the violence directed against police and government institutions, including recent incidents that have resulted in serious injuries to police officers,” it went on. “We also call on the police to exercise maximum restraint, and condemn the use of excessive force and indiscriminate use of tear gas against protestors, which has resulted in civilian casualties.”

The latest events come 14 months after the arrival of the “Arab Spring” in Bahrain and the outbreak of pro-democracy protests against the long-reigning al-Khalifa family.

In mid-March last year, the Sunni Muslim monarchy, supported by troops and police from Saudi Arabia and the United Arab Emirates, cracked down hard against the predominantly Shi’a opposition in what has become an increasingly sectarian conflict.

The Obama administration had spoken out publicly in favour of democratic reform until the Saudi-led intervention which bolstered hard-line forces within the government led by the country’s prime minister, Khalifah ibn Sulman al-Khalifa.

Since then, Washington has resorted more to “quiet diplomacy” reportedly designed to strengthen the position of the more reform- minded crown prince, Salman bin Hamad bin Isa al-Khalifa, who met with Obama in the White House last June.

Washington, which has been particularly concerned that a lack of democratic reforms would lead the Shi’a community, estimated at between 60 percent and 70 percent of Bahraini citizens, to radicalise and possibly seek support from Shi’a-led Iran.

That radicalisation may indeed be taking place. In recent months, the so-called Coalition of February 14th Youth, which calls for the overthrow of the monarchy, has led most of the protests, undercutting al-Wefaq, which so far has been committed to a more reformist approach.

The administration also spoke out strongly in favour of the conclusions and recommendations of the Bahrain Independent Commission of Inquiry (BICI) headed by a prominent international jurist, Cherif Bassiouni, which was tasked to investigate allegations of human rights and other abuses committed during the crackdown.

In addition to the use of excessive force by security forces which resulted in several dozen deaths, the nearly 500-page BICI report released in November detailed other serious abuses, including the rounding up, detention, torture and mistreatment of hundreds of demonstrators, the wrongful dismissal of thousands of others from government posts and universities, and serious due process violations, including the admission of forced confessions, committed against defendants brought before special security courts.

Khawaja, a long-time human rights activist who had been exiled to Denmark in the 1980s but returned to Bahrain in 2001, was himself arrested last April on charges of trying to overthrow the monarchy and subsequently sentenced by one of the courts criticised by the BICI to life imprisonment two months later.

He, along with 13 other prominent opposition activists, has been named as “prisoners of conscience” by Amnesty International which has called repeatedly for his unconditional release.

While in prison awaiting trial, Khawaja was beaten so severely that his jaw and skull were cracked and he has undergone several surgeries since.

To protest his continued detention, he began a hunger strike on Feb. 8, and is now on his 64th day without eating solid food. In an open letter to King Hamad bin Isa al-Khalifa, he said he would continue fasting until “freedom or death”.

Reports of his deteriorating health spurred 15 civil society groups here, including Amnesty, Human Rights Watch, Human Rights First, the Open Society Foundations, and the AFL-CIO labour confederation, to send an open letter to Obama Monday in which they urged him “to publicly call on the Government of Bahrain to immediately and unconditionally release (him) from prison”.

Amnesty reiterated that call Tuesday in light of a decision by Bahrain’s Court of Cassation, which is reviewing the verdicts of Khawaja and his 13 co-defendants, to adjourn its deliberations until Apr. 23 without setting bail. Despite concerns voiced by Danish consular officials who have been able to visit Khawaja, the Bahraini government has insisted that his life is not at imminent risk.

“This delay will have potentially disastrous consequences for his health, which continues to deteriorate as a result of his hunger strike,” Amnesty said. “The authorities’ single-minded determination to persecute Abdulhadi al-Khawaja seems to override any consideration for justice or humanity.”