KINGSTON, Apr 8 2012 (IPS) - Jamaican authorities are aiming to transform an island that experts say faces one of the worst climate risks in the world into a nation “equipped to prepare for and respond to the negative impacts of climate change”. 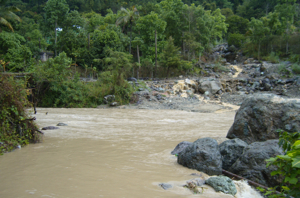 Rocks and deposits from the watersheds above the Negro River in St. Thomas, where improper farming techniques triggered a rockslide in 2010. Credit: Zadie Neufville/ IPS

Vision 2030, the National Development Plan, offers strategies to simplify climate change adaptation, merging its principles with both development and local policy frameworks. Charting a course from 2010 to 2030, the plan aims for “a strong and stable economic foundation”.

Extreme events have had a significant impact on Jamaica’s economy, environment and people. Five major storm events between 2004 and 2008 reportedly caused 1.2 billion U.S. dollars in losses and damage.

Industries that suffer the brunt of each impact include agriculture, which reportedly employs 180,000 people; tourism, employing about 106,000; and fisheries, employing 100,000.

Economists agree that in addition to exposing the country’s lack of resources, adaptation planning has uncovered vulnerabilities in the financial sector. They also point to the need for sustainable financing for adaptation and risk reduction strategies – Jamaica’s adaptation is being funded by grants, loans and donations from international bodies.

The burden of equipping Jamaica to adapt to the impact of climate change does not fall solely on the government.

The private sector is also being urged to pay attention to areas where it is vulnerable. Insurance companies, for example, face risks that could cripple the financial sector, environmental economist Maurice Mason said.

"Lack of adequate re- insurance means the financial sector is highly exposed," he warned. The economist noted that because businesses are grounded in stock returns, they seem to have overlooked the long-term planning necessary for climate change adaptation.

In 2004, Dyoll Insurance Company collapsed after it amassed huge losses resulting from Hurricane Ivan's devastation of several countries and the Cayman Islands. Delayed compensation payments on crop insurance also drove many farmers out of business and hurt agro- processing companies.

"With increased intensities and frequencies of hurricanes and storms predicted, the implications for loss are great for local insurers and their re- insurers," Mason concluded.


“Adequate re-insurance options for local insurers and a reassessment of the triggers and parameters used” by the Caribbean Risk Insurance Facility (CCRIF), which provides risk insurance for Caribbean governments to cover damages from natural events, are needed, said environmental economist Maurice Mason.

Vision 2030 is built into Jamaica’s second national communication to the United Nations Conference on Climate Change (UNCCC). Central to Vision 2030 are a national energy plan, plans for other sectors and a still incomplete climate change adaptation plan.

“Achieving a healthy natural environment” is one of the plan’s four goals, as the vulnerable island is heavily reliant on natural resources. The plan’s 15 outcomes incorporate the related themes of climate change and disaster risk reduction, tourism, manufacturing, environmental protection and sustainable planning.

In drafting Vision 2030, the Planning Institute of Jamaica (PIOJ) sought input from Jamaicans from all walks of life. “If our ecosystem development does not allow people to live, they will work to destroy it,” said PIOJ head Gladstone Hutchinson.

Pointing to the necessity of a “strong focus” on improved environmental management, he noted, “dysfunction in any of these spheres will impact Vision 2030”.

At risk are Kingston’s commercial district and its service infrastructure, the historical town of Port Royal and the Norman Manley International Airport. Portmore, a settlement of more than 250,000 people, Jamaica’s fastest growing town of Old Harbour Bay and the famous Negril are also threatened.

Scientists at the Geo-Informatics Institute of the University of the West Indies predict sea level rise of a minimum two to three millimetres per year during the first half of this century. Such levels could affect an estimated 102 square kilometres in some of the most densely populated coastal areas.

A one to two metre rise, the UWI study speculated, would devastate low-lying coastal areas and key installations, including major power generation facilities, the oil refinery, airports and seaports. It would also have a serious impact on the natural protection of the Kingston harbour.

High engineering costs means there must be focus on improving access roads and shoring up the capability of response agencies, Mason, who works at the Disaster Risk Reduction Centre at the University of the West Indies, told IPS.

“Where climate change is concerned, everything up to 10 meters is vulnerable. That will put all our critical facilities at risk, our transhipment port in Kingston, both major airports and the north coast – that is effectively 70 percent of our GDP,” he said in a telephone interview.

Protecting Jamaica from sea level rise will cost approximately 532 million U.S. dollars, using a 1992 estimated cost of 197 U.S. dollars per person, and even without estimating the impact on natural resources, costs have begun to add up.

Raising about four kilometres of Palisadoes Road by just over three metres above sea level is estimated to cost 65.7 million dollars. The road links the airport and the town of Port Royal to the rest of the island. Recently, it has been blocked due to storm surges, marooning the historic town and airport.

But experts also point to the need for reengineering works on roadways such as the main route from Kingston to the south coast. The main escape route for Portmore and other vulnerable communities, it becomes impassable during bad weather, and alternative routes are also prone to flooding and landslides.

The U.N. Adaption Fund has approved funding for the construction of protective structures to halt the erosion of the world famous Negril Beach, a project with a 25 million dollar price tag.

Experts estimate one to two metres of the beach is eroded each year. In 2010, the popular destination reportedly brought in a quarter of the island’s 2 billion dollars in tourism earnings.

“We have to teach them to protect the environment while living in it,” she said noting that individuals are being helped to develop plans and proposals as well as access start-up funding.

The Forestry Department has replanted more than 300,000 hectares of forests in degraded upper watershed areas to reduce run-off, erosion and silting of waterways.

The National Environment and Planning Agency (NEPA) is restoring natural coastal defences by replanting mangrove trees in some of the island’s most vulnerable communities.

Mangroves absorb wave energy, thereby reducing impact on the land. They are also a source of fuel wood, animal feed and sticks to build fish pots.

Vision 2030 places high priority on alternative sources of energy to mitigate climate change. Most of the island’s energy generation facilities and supporting services lie within a 10-metre vulnerability zone.

The energy plan hinges on the state-owned Wigton Wind Farm in central Jamaica. The facility has helped reduce Jamaica’s oil purchasing, which topped 1.48 billion U.S. dollars between January and June 2011.

The plan aims to reduce the amount of electricity generated from imported petroleum from 95 percent to 30 percent by 2030, with 15 percent from renewable energy by 2020.

In order to lessen the impact of floods and droughts, artificial water recharge mechanisms that return excess water to natural underground storage systems are also being installed, as are rainwater catchment systems.

Additional weather stations are also being set up to provide valuable data on rainfall and temperature.