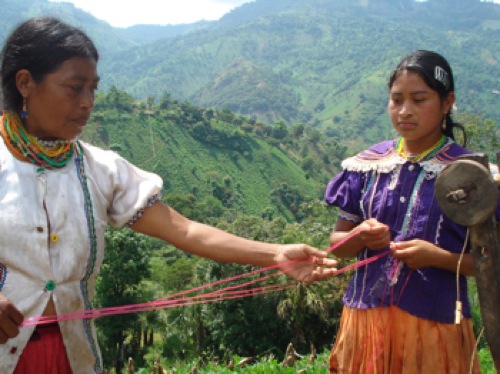 UNITED NATIONS, May 8 2012 (IPS) - Leaders of the world’s 370 million indigenous people are urging governments not only to replace laws that violate the natives’ rights to protect their lands, resources and culture but also to introduce legislation that protects their rights.

At the 11th session of the Permanent Forum on Indigenous Issues, which began here on Monday, these leaders took leading global powers to task for using old but still existing laws as a weapon to justify the exploitation and abuse of indigenous communities.

“(We) have the right to redress for past conquests,” said Tonya Frichner, a Native American activist and lawyer who has also been a member of the Permanent Forum. “This is enshrined in the (United Nations) Declaration on the Rights of the Indigenous Peoples.”

The Declaration was adopted by the U.N. General Assembly in 2007. According to Article 3 of the historic declaration, indigenous peoples have the right to self-determination. Article 28 protects their right to redress for past conquests while Article 37 explains the right to agreements.

Established by the U.N. Economic and Social Council (ECOSOC) in 2000, the forum is comprised of 16 independent experts who provide advice and recommendations on indigenous issues to the U.N. system.

A long history of oppression

Indigenous leaders hold that the laws of settler governments that target indigenous populations emanate from the so-called “Doctrine of Discovery”, an issue that has become focal point of discussions at this year’s forum meeting.

In interviews with IPS, several participants appeared particularly concerned about the ongoing exploitation of natural resources buried in and around native territories worldwide and state authorities’ open support for the logging and mining corporations that are taking these resources.

“520 years and the doctrine of discovery is alive and well,” said Marlon Santi, who travelled all the way from the Amazon in Ecuador. “This is about extremism, genocide, land grab(bing) and even slavery. All of this is happening in the name of (the) Christian God and development.”

“The oil company, Chevron, has polluted our river. Phillips has invaded our territories. Amazon is the lifeline and the mother of our people,” he said. “In our region, nothing much has changed. The present government is as bad as the previous one.”

Santi, who faces sabotage and terrorism charges for leading resistance against the incursions of big oil and coal corporations, said the Ecuador government gave four million hectares of indigenous lands to foreign companies this year – without obtaining informed consent from the native communities.

Some participants also worried that if the wider acceptance of the doctrine of discovery was not challenged effectively, the progress that the global indigenous rights movement has made over the past two decades would come to a halt.

“Through the continued use of non-indigenous languages, terminology and perspective in describing the doctrine of discovery, we may inadvertently encourage the reproduction of such perspectives amongst our own peoples,” said activist Arthur Manuel from Canada.

“It’s a multifaceted concept. It’s a legal fiction. It promotes exclusion, racism, discrimination and alienation from decision-making processes and invisibility within the same institutions,” he observed.

It has been observed in past U.N. meetings that language barriers often caused frustration among activists hailing from indigenous territories. At these meetings, the discussion takes place in English and French, which are often laden with a heavy dose of legal jargon and technical terms alien to the indigenous participants..

“[We] are trying not only to challenge the conventional model of development, but also to make people understand that if they listen to our point of view on development, they can also change the situation globally and locally.”

Of all the U.N. member states, only Bolivia and Cunningham’s country of Nicaragua have incorporated the principles enshrined in the declaration of the indigenous peoples’ rights into their national laws.

The discussion on this will continue until end of the meeting on May 18.