Q&A: Afghanistan Between Peace and Stagnation

Aline Jenckel interviews JÁN KUBIŠ, special representative of the secretary-general for Afghanistan and head of the United Nations Assistance Mission in Afghanistan (UNAMA)

UNITED NATIONS, May 31 2012 (IPS) - Although Afghanistan’s government and economy remains fragile and the security situation unstable, the 28 members of NATO plan to withdraw International Security Assistance Force (ISAF) troops by 2014, as they believe it is time to hand over responsibility to the Central Asian nation.

Yet after a decade of involvement by ISAF troops to assist in the country’s stabilisation, Taliban attacks and drug still tear the country apart. Nevertheless, Western leaders want to continue their aid and support after ISAF pulls out of the country, and so a post-2014 roadmap was launched at the NATO summit in Chicago from May 20-21. 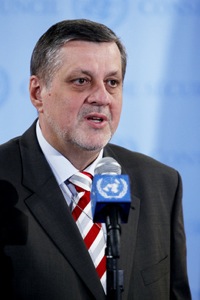 Ján Kubiš, special representative of the secretary-general for Afghanistan and head of the U.N. mission in the country. Credit: UN Photo

Aside from ISAF, the political mission United Nations Assistance Mission in Afghanistan (UNAMA) was mandated by the Security Council to operate inside the country within the areas of development, humanitarian issues and political affairs.

“The transition is much more comprehensive than only the security transition,” Ján Kubiš, special representative of the secretary-general for Afghanistan and head of UNAMA, explained. It also involves the economy, development, human rights and rule of law, to name a few areas.

IPS U.N. correspondent Aline Jenckel interviewed the special representative on the current situation in Afghanistan and the crucial role neighbouring countries play in its stabilisation.

Q: At the recent NATO summit in Chicago, members discussed the withdrawal of ISAF troops by 2014. As Afghanistan’s economy is still weak and government corrupt, what do you think needs to be done for long-term security and assistance after the drawdown?

A: The NATO summit, although it was an ISAF summit, which focused on the security side of the business, very clearly noted that the transition is much more comprehensive than the security transition.

It refers to a number of issues, including the need to underpin the security transition with the economy, development, social development, respect for human rights and freedom, good governance, rule of law and more.

There were many references, especially to the need to protect and develop the achievements of the past years, with regards, for instance, to the rights of women, or respect for the country’s constitution.

More focus is needed on these kind of issues. The approach must be comprehensive and the approach must be such that we guarantee the achievements of the past ten years and pay attention to issues of good governance and human rights.

Q: Recently there have been attacks on schools in Afghanistan. What needs to be done in terms of long-term security for women and girls and children in general, as they are the country’s future?

A: We, as the U.N. family and as the UNAMA were very unhappy about what happened after this acceleration of attacks and the problems that anti-government forces were creating for schools in certain regions, such killing and harassing teachers and schoolchildren.

We decided to bring this to the attention of both the Afghan authorities and the international military and requested their action on this, because indeed it is about the future of the country.

We are unpleasantly surprised, to see that on one side Taliban claim they have learned lessons from the past, that they are not against the education of women and children. Yet at the same time, in the past weeks, attacks on schools have increased.

We would like to see anti-government forces keep their word and stop these attacks.

But there is also a responsibility of the police, first of all, and security forces to do everything to protect and create conditions for children to attend schools, and especially for girls, because very often schools for girls were primarily targeted.

Q: Afghanistan is located in a area of conflict, between such countries as Pakistan and Iran. Many people doubt that peace will be restored, as neighbours will interfere, and some even prophesy that Afghanistan will become another Iraq. Does your mission also communicate with neighbouring countries?

A: Referring again to the ISAF summit in Chicago, I am very happy to note that for the first time there were participants from Central Asian countries such as Pakistan.

All of them agreed to the clear provisions in the final declaration, and they spoke about the need to support the regional processes of cooperation and the support of decent reconciliation.

As far as the U.N. is concerned and notably the UNAMA, it is indeed a part of my mandate to work with regional countries. I visited almost all neighbours of Afghanistan during the first months that I was in the country. Before the summer, I intend to visit all the countries, such as Pakistan or Iran, because of their crucial role for the stability and development of Afghanistan.

It is about encouraging them to support Afghanistan politically and about the processes of peace, reconciliation and stabilisation, as well as engaging economically, because that is one of the most lasting contributions.

Another aspect concerning Afghanistan, Pakistan and Iran is their joint effort to advance the refugee situation, as we are still speaking about millions of Afghan refugees, notably in Pakistan and Iran.

I was very happy to note that the regional plan in this regard received support from the recent conference by UNHCR in Geneva in the beginning of May.