LIMA, May 29 2012 (IPS) - For ages, rural women in the Peruvian highlands have been selecting and storing seeds, ensuring their preservation. But the authorities have failed to tap into this storehouse of knowledge and experience, despite the contributions it could make to the design of effective policies for adaptation to climate change, which poses a growing threat to the women’s livelihoods. 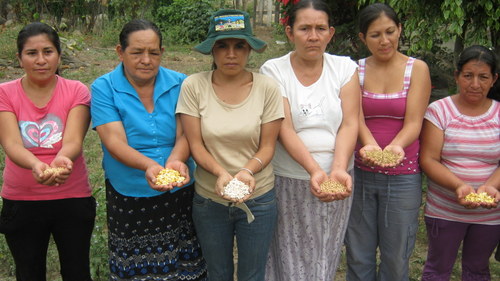 Peru’s campesinas or peasant women have played this role from time immemorial, handing down their knowledge by oral transmission. But today their traditional know-how is insufficient to help them endure unseasonal rainfall, extreme frosts, gale-force winds and other climate change-related phenomena.

The national meteorology and hydrology service projects a 0.2 to 0.5 degree Celsius rise in temperature in Peru by 2030-2050 due to global warming. As a result, the rainy season will continue to change, which will have a heavy impact on agricultural production.

Experts predict that the difficulties already faced by families who depend on agriculture will thus be aggravated, and that women will especially feel the effects, due to gender inequality. But they also say it is possible to start coming up with viable medium to long-term adaptation measures.

“Small-scale agriculture is one of the areas most vulnerable to climate change,” said Elena Villanueva, with the Rural Development Programme of the Flora Tristán Centre, a local women’s group. “Women suffer problems finding water, due to the disappearance of snow and ice on the mountaintops and to drought, or they lose their crops to severe frost and floods.”

But the sociologist told IPS that although women suffer the brunt of this situation, they can also develop skills that allow them to play an active role in adaptation, as shown by the Flora Tristán Centre in the southern Andean region of Cuzco and the northern coastal region of Piura, where it is carrying out a project on climate justice and rural women.

One of the areas to expand on is the accumulated knowledge and practical wisdom of rural women with regard to the care and preservation of native seeds, which have not been taken into account by decision-makers at the local, regional or national level.

“It has been demonstrated that these seeds are more resistant to pests generated by abrupt climate swings, because no chemicals have been used to grow them,” Villanueva said. “They also have the capacity to adapt to other ecosystems, where women could continue farming.”

Small-scale agricultural production helps maintain the great genetic diversity found among crops in Peru, which is largely the result of the work of thousands of generations of women.

At 3,100 metres above sea level, in the highlands community of Tiomayo near the city of Cuzco, 1,150 km southeast of Lima, Isabel García Champa, 42, works hard on her small farm.

In workshops at the Flora Tristán Agroecological School, she has built on what she learned about preserving and saving seeds since she was a young girl. And she is all too aware of the impact that climate change can have.

“On my land I grow potatoes, maize, beans, apples, peas and wheat,” she told IPS. “Sometimes I win, sometimes I lose. It’s not like it was before; everything is changing with the rise in temperatures, the heat. The rains don’t come when they’re supposed to, and often we can’t even grow anything.”

García, whose mother tongue is Quechua but who also speaks Spanish fluently, is a married mother of four and divides her long days between working on the nearly one-hectare farm and taking care of her family.

Her children also help out on the farm, although only the two youngest – a 16-year-old girl and a 10-year-old boy – still live there.

She sees herself as an inquisitive, enterprising woman who wants to continue learning and to help encourage other women farmers.

In late 2011, she won the first contest for Women Caring for Seeds and Preserving Identity and Life.

The prize is granted by the Flora Tristán Centre and Peru’s Network of Rural Municipalities, and García is especially proud of the farm tools that she was awarded, worth around 300 dollars. 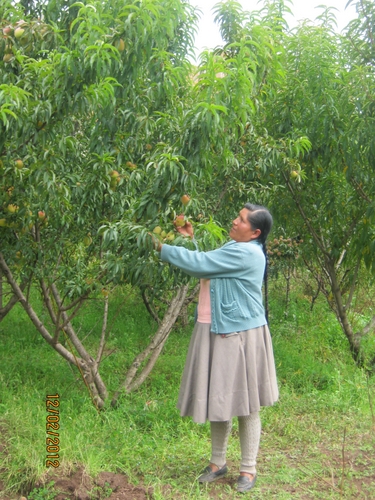 Isabel García Champa next to one of the apple trees on her small family farm in the Peruvian region of Cuzco. Credit: Katherine Pozo/IPS

She won the prize with the six kinds of maize she grows, some of which are exclusive to the Peruvian highlands: chullpi, janka, sacse, cheqche, estaquilado and blanco.

“I have gradually improved my knowledge,” she said. “I shell the corn and choose the healthiest kernels, the ones that are the same size and colour. The kernels have to be whole; broken ones aren’t any good.

“When everything is ready, I put the kernels in cloth sacks and store them in my house, in my bedroom. The kernels are safe there from dust or worms, and they last at least a year, for when I’m ready to plant again,” she said.

But information and technical resources are scarce and difficult to access for rural women, and the efforts of NGOs cannot fill the gaps left by the state, which does not take advantage of this valuable human capital.

“We need support to organise ourselves and to reach all of our fellow women farmers in the different communities, especially way up in the mountains,” García said.

“We also have the right to know how to take better care of the seeds. That is what I would ask of the authorities, and also I would ask that they call on us to participate in the climate change plans that have to be designed. That way we could contribute what we know,” she said.

The mishandling or poor storage of seeds reduces their yield, and farmers must learn techniques to guarantee their capacity to germinate.

“Many factors influence this process, such as temperature, humidity level, storage conditions and the quality of the seeds,” Villanueva said.

She proposed developing strategies to make the women’s skills and practices sustainable, create seed banks at the community, local and regional level, and patent the seeds, to ensure they are protected.

“But the main thing is: how can it be possible that women farmers have alternatives to offer for adaptation in the face of the vulnerability of agriculture, but they are not included in the design and application of policies at all levels; this has to be remedied,” she said.

For example, the official documents on regional strategies on climate change in Cuzco and Piura lack a gender perspective and do not take organisations of rural women into account.

The same is true with regard to the national plan for environmental action, PLANAA-Peru 2011-2021, which outlines the government’s climate change adaptation measures.

Alexander Rojas with the Network of Urban and Rural Municipalities of Piura said it was an urgent obligation of local governments to earmark budget funds for ongoing training for farmers, taking into account the gender-differentiated impacts of climate change.

“Farmers’ associations need extension and assistance in strengthening their organisational capacity, so their traditional seed preservation practices can respond to the current climate change challenges and play a part in effective adaptation actions that take the shape of public policies,” he told IPS.