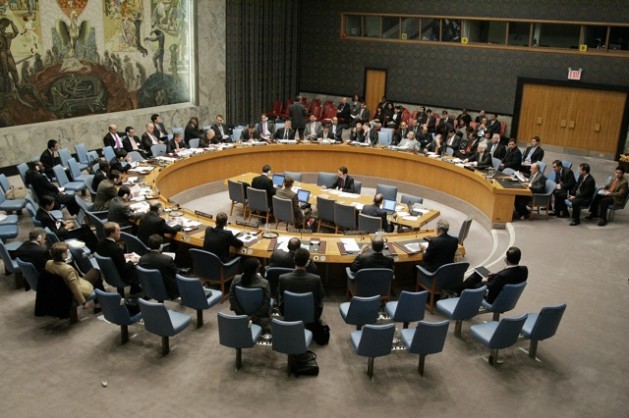 UNITED NATIONS, May 15 2012 (IPS) - The 193-member General Assembly is expected to vote on a resolution – described as “historic” – requesting the five permanent members (P5) of the Security Council to consider “refraining from using their vetoes on action aimed at preventing or ending genocide, war crimes and crimes against humanity”.

But the P5 has already indicated that the General Assembly, the U.N.’s highest policymaking body, has no business offering such recommendations to the Security Council.

The resolution, being co-sponsored by five of the world’s smallest member states, namely Costa Rica, Jordan, Liechtenstein, Singapore and Switzerland, is aimed at “enhancing the accountability, transparency and effectiveness of the Security Council” with the long list of recommendations.

The five countries, who describe themselves as the “Small Five” (S5) are in a virtual battle with the P5. A vote is expected later this week.

“If the General Assembly were to adopt the S5 resolution, and the Council to implement the 20 recommendations, it could result in one of the most important advances in the Security Council,” Pace said.

As a result, he said, millions of lives would be saved and scores of wars and rebellions could be prevented during the next 30 years.

In a statement released here, James Christie, chair of the Council of the World Federalist Movement-Institute for Global Policy, said his organisation “strenuously disagrees” with the P5 contention that the General Assembly should keep out of Security Council affairs.

Pace commended the S5 for having the courage of its convictions to co-sponsor the five-page resolution which recommends several measures “for consideration by the permanent members of the Security Council”.

These include “explaining the reasons for resorting to a veto or declaring its intention to do so, in particular with regard to its consistency with the purposes and principles of the charter of the United Nations and applicable international law.

“A copy of the explanation should be circulated as a separate Security Council document to all members of the organisation,” he said. The resolution has taken added importance in view of the two vetoes cast last year by Russia and China over a Western-sponsored resolution threatening sanctions against Syria for the killings of civilians.

According to U.N. figures, more than 7,500 civilians, on both sides of the conflict, have died since the uprising began in March 2011.

The Security Council was also slow in reacting to the 1994 genocide in Rwanda where over 500,000 were killed.

In April 1994, the Council condemned the killings but refused to describe it as “genocide”.

Pace told reporters that the S5 resolution has no bearing on the ongoing negotiations for the reform and expansion of the Security Council which he described as “divisive” because it also involves an amendment to the U.N. charter.

In a statement released here, Dr. Andres Serbin, chair of the International Coalition for the Responsibility to Protect, said Article 24 (2) of the U.N. charter clearly requires that all decisions of the Security Council, including the use of the veto “must be made in a manner that are consistent with the Purposes and Principles of the United Nations”.

Tragically, he pointed out, almost every year and even at present, the international community witnesses Council deliberations where use of the veto (or its misuse) is inconsistent with these provisions – a situation that this measure in the resolution attempts to address.

Meanwhile, in a letter to member states, the S5 say that a draft text of the resolution was presented about a year ago “hoping to engage the Security Council on a constructive dialogue about our proposals.

“After a year of consultations, we believe that the time is ripe to give the General Assembly an opportunity to pronounce itself on the issue.”

The only self-interest the S5 has, the letter says, is to make the United Nations work a little better.

Currently, the Council has 15 members: the P5 and 10 non-permanent members which are elected every two years on a geographical basis.

The letter adds: “Most of us are (non-permanent) members of the Security Council once in a lifetime. Some have never been or will never be.

“Now, we are offering you a toolbox which allows the wider membership to be better informed and consulted on what is going on in the Council.”

Seeking support from the membership, the letter says: “Would you keep things as they are or would you rather prefer to be treated with some more transparency and openness. The choice is yours.”