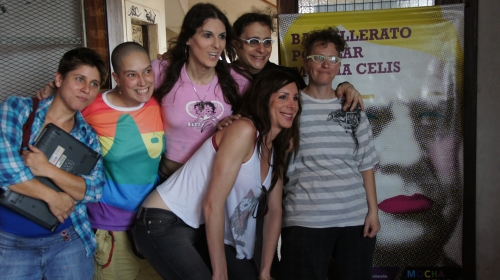 BUENOS AIRES, May 10 2012 (IPS) - Under a new law that recognises a broad range of rights for transvestites, transsexuals and transgender persons in Argentina, they will have the right to modify their legal documents to match their gender identity.

Activists say the law, which was passed by the Senate late Wednesday, breaks new ground in the world because it allows transgender people to change their legal identity without first having to undergo sex change surgery or hormone therapy.

But if they do decide to undergo physical changes, the new legislation guarantees them access to surgery or hormone treatment in both the public and private health care systems.

“This is a historic moment,” transvestite activist Lohana Berkins told IPS. “For the first time, the state has recognised the rights of one of society’s most marginalised, persecuted and excluded groups,” she added, visibly moved.

The gender identity law, which was approved by a vote of 55-0, with one abstention, and had already made it through the lower house of Congress, was based on a bill presented by organisations and independent activists, who criticised earlier draft laws.

They argued that the previously introduced bills stigmatised them by requiring people seeking authorisation for a change in gender on their identity cards to submit to often degrading examinations by psychologists, psychiatrists, medical doctors and judges.

“I have a knot in my stomach, thinking about compañeras who are no longer with us. I can’t believe that we will not be at the mercy of the arbitrary prejudices of a judge or psychiatrist,” said Berkins.

The new law states that any person over the age of 18 can apply for the “rectification of their name, sex or image in all public registries where such information is kept, when their personal data does not coincide with their self-perceived gender.”

That means transgender persons can apply for the modification of their identity card, passport, and even birth certificate. In the case of their birth certificate, the original can be destroyed five years after the change has been made.

The discrepancy between gender presentation and documentation is an enormous hurdle to access by transgender people to formal education, employment, housing or healthcare, unless they hide their transgender identity.

To illustrate the kind of problems and humiliation they face, Valeria Ramírez, the head of the transgender section of the Buenos Aires AIDS Foundation (FBAS), told IPS in a December 2011 interview that “When we travel, they look at us as if we were criminals, studying our identity document or passport, and making us wait. Finally they let us go on, but everyone stares at us as if we were terrorists.”

The law clarifies that no “proof of genital reassignment surgery, hormone therapy or psycho-medical treatment” is needed to apply for the modification of documents, a procedure that will be carried out by the civil registry.

But if the individual decides to undergo any of these treatments, they must be provided, at no extra charge, by private or public health service providers.

Berkins stressed, however, that the guarantee of access to these health services is not “because we are sick, but because we want to receive treatment, just like anyone else.”

Emiliano Litardo, a lawyer who helped draft the bill and is a legal adviser with the National Front for the Gender Identity Law (FNLIG), told IPS that it took more than nine months to prepare, drawing – and improving – on laws in force in different European countries.

“We avoided the weak points in the laws approved in Sweden and Spain, which require psycho-diagnostic studies or the opinion of bioethics committees – something that we reject,” Litardo said.

He said the organisations demanded that the new law be based on four non-negotiable principles: the depathologisation”, dejudicialisation”, “de-stigmatisation” and “decriminalisation” of the question of trans identities.

“My task was to translate into legal terms the political demands of the trans organisations, on the basis of those four essential concepts,” he explained. “Now they are also subjects with rights.”

Berkins underlined that the new law “does not represent a cosmetic change, but true amends.”

“We have been living in a kind of apartheid situation that is very difficult and painful. This enormous change was unthinkable 10 years ago,” she said.

Addressing Congress during Wednesday’s session, Senator Nito Artaza of the Radical Civil Union opposition party apologised to the members of sexual minorities for how long they had to wait for the legislature to finally take measures to put an end to the discrimination.

“The state understood that it had to remedy this error, and they will no longer be able to segregate us,” said Berkins. “We will have access to healthcare, education, work and housing – and without depending on anyone’s authorisation for us to get our documents.”

She said the law will also make the lives of trans children easier. “They will grow up in a different context, because now there is a state that will protect them, and they will not have to build their identities in an environment of segregation and exclusion.”

In its original form, the bill drafted by the FNLIG established that trans persons could apply for the modification of their documents at the age of 16.

But while the legislators raised the age to 18, they took into account the needs of adolescents. The law stipulates that children between the ages of 14 and 18 can apply for a change of name with authorisation from their parents or guardians.

For the past two decades, transgender people have been fighting against persecution and against violations of their right to healthcare, education and loans, and for the right to have identity documents that match their physical appearance.

For many years, their main demand was that the police stop harassing and abusing transgender persons involved in prostitution, which is often the only occupation open to this marginalised segment of the population.

But in recent years, the courts began to authorise the change of name on identity documents without requiring proof that the trans individual in question had undergone sex-change surgery.

However, this was done on a case-by-case basis, and each individual had to wait months or even years for a resolution that depended on the discretion of a judge or administrative official.

Earlier, the lesbian, gay, bisexual and transgender (LGBT) community won the right to same-sex marriage in Argentina. The 2010 law was the first of its kind in Latin America.