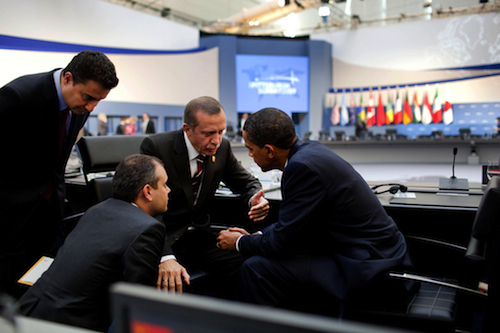 WASHINGTON, May 7 2012 (IPS) - Major changes that have swept both Turkey and its neighbourhood since the Cold War require Washington to forge a “new partnership” with Ankara, according to a new report released Tuesday by the influential Council on Foreign Relations (CFR).

Among other steps, U.S. President Barack Obama and Turkish Prime Minister Recep Tayyip Erdogan should use their close relationship to create a government-wide forum for regular, cabinet-level bilateral consultations like Washington’s Strategic and Economic Dialogue (SED) with China or its strategic-level exchanges with Israel, according to the report by a blue-ribbon task force of 23 members.

While conceding that Washington will disagree with Ankara on a number of important issues, including the pace and direction of political reform inside Turkey and Ankara’s relations with Israel, the report concludes that “it is incumbent upon policymakers to make every effort to develop U.S.- Turkey ties in order to make a strategic relationship a reality”.

“To do otherwise would be to miss a historic opportunity to set ties between Washington on a cooperative trajectory in Europe, the Eastern Mediterranean, Middle East, and Africa, for a generation,” according to the 90-page report, “U.S.-Turkey Relations: A New Partnership”.

The report comes amidst a growing – albeit slow – appreciation here for Turkey’s emergence over the past decade as a global economic powerhouse, evidenced by its membership in the Group of 20 (G-20), and as a regional superpower with significant influence on not just the evolution of the past year’s “Arab Spring” but also the ongoing crisis between Iran and the West, and the future supply of oil and gas from the Caspian and Central Asia to Europe.

During the Cold War, Turkey was largely taken for granted as a loyal – if poor, inward-looking and sometimes repressive – member of NATO whose territory occupied a particularly strategic position vis-à-vis “containing” the Soviet Union.

In the last 20 years, but especially since the accession to power of Erdogan’s Justice and Development Party (AKP) in 2002, however, Turkey’s position has changed dramatically.

Economically, its growth rate has been sustained at close to Chinese levels over the past decade; politically, the AKP has significantly weakened the once-dominant military and instituted other democratic reforms; and internationally, Ankara has emerged as a confident and independent actor, even as its loyalty to NATO, as shown by its continuing troop commitment in Afghanistan and its agreement to station an anti-missile radar system on its soil, appears undiminished.

“I would view Turkey personally today as one of the four most important members of the NATO, certainly right there with Britain, France, and Germany,” he said in a lecture at the Brookings Institution. He also argued that Turkey’s political and economic evolution could serve as a model not only for newly democratic Arab states, but also for Iran and Russia.

As both he and the CFR report noted, however, the United States has been slow to recognise its significance.

Standing up to Washington

“The new Turkey …is not well understood by U.S. administration officials, members of Congress or the public,” the report notes, adding that one of the aims of the task force, which included prominent figures representing a broad range of expertise and political views from centre right to centre left, is precisely to build a better understanding of Turkey’s importance.

Indeed, much of the news coverage of Turkey here over the past decade has been negative.

Its parliament’s rejection of Washington’s use of Turkish bases as a launching pad for the 2003 Iraq invasion came as a shock to many here.

More recently, Erdogan’s outspoken denunciation of Israel’s 2008-09 military campaign in Gaza, followed by the Mavi Marmara incident in which nine Turks were killed by Israeli commandos in international waters, sparked a wave of anti-Turkish acrimony promoted, in particular, by neo- conservatives, who had long been hostile to the AKP due to its anti-military positions and Islamist roots.

The major institutions of the powerful Israel lobby have also since quietly retaliated by supporting the Greek and Armenian lobbies against Turkish interests in Congress.

At the same time, human-rights and press-freedom groups here have grown increasingly critical of internal developments in Turkey, particularly the detention and prosecution of dozens of journalists and others in connection with the “Ergenekon” and Sledgehammer” conspiracy investigations of the military-dominated “deep state”, and of scores of activists, politicians, reporters and academics accused of supporting the Kurdistan Workers’ Party (PKK).

The new report echoes many of these rights- and democracy-related complaints, noting, for example, that the AKP’s constitutional reform programme has slowed unnecessarily and that the government has sometimes resorted to the “same nondemocratic tools” as its predecessors.

Washington, it says, should encourage Turkish leaders to “follow through with their commitment to writing a new constitution that better protects minority rights and basic freedoms”. The Kurdish issue, according to the report, “is among the biggest obstacles to Turkey’s democratic ambitions and the root of many of its illiberal practices”, and Obama should encourage Erdogan to pursue “a new Kurdish opening”.

At the same time, the report insists that some of the fears about the AKP’s direction are exaggerated or unfounded. “In particular, the decline in the role of the military in Turkish political life does not mean that Turkey is inexorably headed toward theocracy or movement away from NATO,” it insists, adding that “the United States must not view the sum of U.S.-Turkey relations through the narrow prism of particular issues, whether they be Armenia, Israel, or ties to NATO”.

“The U.S.-Turkey relationship is much broader than the Armenian tragedy, the parlous state of Turkey- Israel relations, or the false debates about Turkey’s place in the West,” it declares.

Washington “needs to see Turkey as a potential strategic partner with which it has a relationship not only with newer partners, such as India and Brazil, but ultimately with its closest allies, such as Japan and South Korea”, the report adds.

On more specific recommendations, the report suggests that domestic politics in both Israel and Turkey are unlikely to favour any rapprochement in the near future, so Washington should encourage the two countries to maintain what it calls the “one bright spot” in bilateral relations – trade.

It also calls, among other things, for greater U.S. efforts to advance the normalisation of ties between Turkey and Armenia and to contain Ankara’s long-standing territorial disputes with Greece and potential disputes with Israel over gas deposits in the eastern Mediterranean.

While the two countries have differed on a number of fronts and popular distrust of the United States is especially high in Turkey, those differences “should not preclude the development of a partnership, in particular as Ankara has moved closer to Washington’s position on Syria and Iran”, according to the report, which also stressed Turkey’s “constructive” role in Iraq despite its opposition to the invasion.