Fair Trade Alive and Well in Spain Despite Recession

“The impact of the crisis on fair trade varies according to the type of product and the channel of distribution. It has had less of an effect on goods from Latin America and on sales in large retail stores,” Gonzalo Donaire, director of research at the State Coordinator of Fair Trade (CECJ), told Tierramérica.

The CECJ groups together around 30 organisations involved in this alternative trade system. 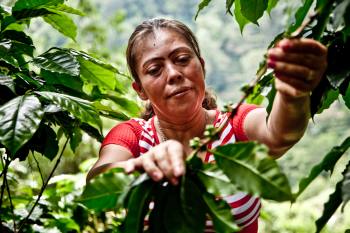 In 2010, sales of fair trade goods in Spain totaled 22.5 million euro (28.2 million dollars), which represents an increase of 24.2 percent over 2009 and 33.6 percent over 2008, according to a CECJ study based on sales by its member organisations of products certified by Fairtrade Labelling Organisations International (FLO).

FLO grants authorisation for the use of the Fairtrade label to producers and traders who meet a series of standards, including the payment of decent wages and safe and healthy working conditions, respect for the environment, elimination of child labor, gender equity, and the reinvestment of profits in community development.

Food products, especially coffee, sugar and cocoa, account for almost 70 percent of sales of Fairtrade certified goods on the Spanish market. They are followed by crafts (25 percent), imported from 24 different countries (nine in Latin America, nine in Asia, five in Africa and one in the Middle East), according to the report “El comercio justo en España 2010: Crisis, impactos y alternativas” (Fair Trade in Spain 2010: Crisis, impacts and alternatives), published by the CECJ in July 2011.

Of the 35 countries that supply fair trade food products to the Spanish market through CECJ importers, 15 are in Latin America, nine are in Asia and eight are in Africa, the report notes.

“We have noticed a significant drop in sales of crafts and ornaments,” Mercedes García, the marketing coordinator at Alternative and Solidarity Economy Initiatives (IDEAS), told Tierramérica.

IDEAS is a fair trade cooperative that has worked on cooperation projects with Latin America for 20 years and primarily imports food products like organic brown sugar.

The sugar comes from the Ecuadorian association Maquita Cushunchic-Comercializando Como Hermanos (MCCH). (“Maquita cushunchic” means “let’s join hands” in the Quechua indigenous language, while “comercializando como hermanos” is Spanish for “trading like brothers and sisters”.) The MCCH represents 400 rural and urban cooperatives that produce food and textile products, and trains them in business self-management and financial administration.

While sales of food products were hardly affected in 2010 by the impacts of the crisis, and even grew by 0.4 percent, craft sales fell by 44.5 percent, according to the CECJ study.

Twenty years ago, two out of every three fair trade products sold in Spain were crafts. By contrast, “since the beginning of the decade, the trend has been a slowdown in craft sales and increasingly higher sales of food products,” said Donaire.

García believes that the economic crisis has contributed to more “responsible” consumption in Spain: people are eating out less and are more interested in a healthy diet.

Donaire also believes that the crisis has also made consumers more conscientious. Alongside the “indignant” protest movement, there has been an upsurge in support for fair trade initiatives. “The recession is helping to reawaken critical awareness among consumers,” he said.

Spain is undergoing its biggest spending cuts since democracy was restored in 1977, with the aim of reducing its budget deficit from 8.5 percent of GDP to 5.3 percent, as demanded by the EU.

Moreover, with an unemployment rate of over 20 percent, there is little room in the budgets of most Spaniards for luxuries.

Since 2008, FLO-certified products have begun to be sold in large retail stores, supermarkets and coffee shop chains. This has had an impact on shops run by fair trade organisations and other small businesses, where the impact of the crisis has been felt in declining sales.

“The crisis has changed people’s shopping habits. They now prefer to shop in supermarkets and big stores, and are buying less from the fair trade shops operated by organisations,” said Donaire, who highlighted the increase in sales of certified products in these new market niches.

Donaire believes that the challenge lies in determining whether, once the crisis has passed, these small specialised shops will regain their role as the driving force in the growth of the fair trade market, or whether the new distribution channel of supermarkets and big retailers will maintain its dominance.

“We consider any increase in sales to be positive, because it means more income,” he said. But sales through smaller shops contribute added advantages, such as raising awareness through more personalised customer service and political advocacy.

The director of access to fair trade markets at the non-governmental organisation Intermón Oxfam, Juanjo Martínez, told Tierramérica that between 2007 and 2008 there was a significant drop in sales. But in the last three years, “they have remained stable at around eight million euro (10 million dollars) annually.”

The incorporation of fair trade products by mainstream brands has helped to boost the sector and offset the declining sales in small shops, Martínez acknowledged.

Intermón Oxfam recently launched Tierra Madre coffee in Spain. It is produced by the Nicaraguan women’s cooperative Aldea Global (“Global Village” in Spanish). Aside from providing the women producers with an income, the initiative also assists them in obtaining property titles for the land on which they grow their coffee.

All in all, spending on fair trade products in Spain was close to 600 dollars per 1,000 inhabitants in 2010, almost 10 times the European average, according to the CECJ report.

Although sales have tripled since 2000, said Donaire, “we still need to do a great deal more.”