Jun 8 2012 (IPS) - Irreversible environmental damage threatens to destabilise the world’s life-support systems unless urgent action is taken, according to the latest Global Environment Report (GEO-5) which looks to the Rio+20 summit as a crucial opportunity to halt this decline.

The fifth edition of the United Nations Environment Programme’s (UNEP) flagship environmental report compiles three years of research on the state of the global environment, produced with the collaboration of over 600 individual experts, institutions and U.N. agencies. 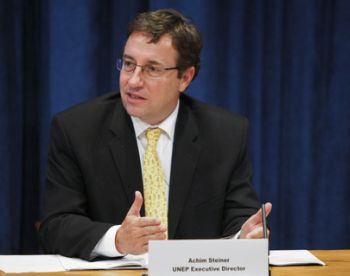 It documents widespread changes to the planet, citing an alarming array of climatic events, unprecedented in human history, from floods and droughts to the extinction of species, sea level and temperature rise, pollution and disease.

UNEP’s report calls for urgent and decisive action just weeks before the Rio+20 Conference on Sustainable Development in Brazil when over 130 world leaders will come together to debate a defining response to the challenges facing the world.

“If current trends continue, if current patterns of production and consumption of natural resources prevail and cannot be reversed and ‘decoupled’, then governments will preside over unprecedented levels of damage and degradation,” said U.N. Under-Secretary-General and UNEP Executive Director Achim Steiner.

The failure of governments across the globe to address pressing environmental concerns was spotlighted with evidence demonstrating that out of over 500 international goals agreed upon to safeguard the environment, only four show signs of progress.

These are eliminating the production and use of substances that deplete the ozone layer, removal of lead from fuel, increasing access to improved water supplies and boosting research to reduce pollution of the marine environment.

Amidst signs of progress was the sobering prediction of Matthew Billot, UNEP team leader for GEO-5, that “the world is unlikely to meet the (climate change) target” of keeping the increase in global temperatures to within two degrees C.

“The pace of destruction has only increased,” said Billot, and the planet continues along an unsustainable path, nearing and in some cases surpassing critical thresholds.

Global water withdrawals have tripled over the past 50 years and “we should be very aware of the supply of drinking water and quality, not just in arid hot countries but all over the world,” Billot told IPS.

North America emerges as the world’s biggest water consumer with the highest footprint at 2,798 cubic metres per person per year – double the average.

According to current trends, more than one in 10 people will lack access to fresh drinking water by 2015 and “fresh water availability will be far below the demand we will see by the end of the century”, said Amy Fraenkel, director of UNEP’s Regional Office for North America.

As the global population experiences overwhelming growth, measured at seven billion today and set to reach nine billion by 2050, a central question is how to sustain the planet’s expanding population in a context of scarce resources and environmental challenges.

“This is a key issue,” Fraenkel told IPS. “The solutions we provide are practical solutions that will lead us towards a greener economy,” she added, in reference to UNEP’s policy responses, which draw on current success stories, and are adapted to suit the particular environmental needs of different countries.

At a press conference Wednesday on the forthcoming Rio+20 summit, U.N. Secretary General Ban Ki-moon highlighted energy as a cornerstone of the green economy, describing it as “the golden thread that connects economic growth, social equity, and environmental sustainability”.

In terms of market share, fossil fuels continue to be the major source of energy in North America, secured by government subsidies that that shore up the market for unsustainable sources of energy.

“A clear response is the removal of perverse subsidies for fossil fuels, that are creating a market in which renewable energy just can’t compete,” Fraenkel told IPS, urging policy makers to rethink an economic philosophy geared towards endless growth, which has failed thus far to integrate the environment into policy decisions.

“The way we have treated the environment is as an afterthought, it’s a luxury for wealthy countries, it’s something to be addressed only once the economy is developed… that has been the philosophy of our Western industrialised economies,” said Fraenkel.

If there is to be an effective transition to a green economy, which facilitates sustainable development, “We have to rebut the myth that there is conflict between economic and environmental health,” Ban said in his message for World Environment Day, Jun. 5.

The environmental services sector bears this out. It now employs close to five million people, double the number of jobs from 2006-2010, with three million people in the U.S. employed in environmental goods and services, according to a new report produced by the International Labour Organisation, trade unions and UNEP.

The report concludes that a transformation to a green economy could generate 15 to 60 million jobs across the globe over the next two decades and lift tens of millions of workers out of poverty.

GEO-5 is a sobering documentation of the state of the world’s atmosphere, land, water and biodiversity, all of which are under increasing pressure from drivers of change such as population growth.

“(It) reminds world leaders and nations meeting at Rio+20 why a decisive and defining transition towards a low-carbon, resource-efficient, job-generating green economy is urgently needed,” Steiner said. “The scientific evidence, built over decades, is overwhelming and leaves little room for doubt.”