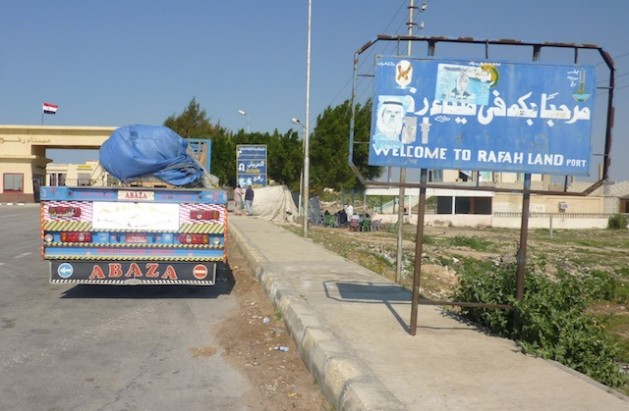 CAIRO, Jul 31 2012 (IPS) - With the election of the Muslim Brotherhood’s Mohamed Morsi as Egypt’s first-ever freely elected president, the Gaza file – especially as it pertains to Egypt’s border with the besieged enclave – is fast becoming one of the new president’s first major foreign policy challenges.

“Morsi knows that the Gaza issue is intimately linked to Egypt’s relations with Israel and the U.S.,” Tarek Fahmi, director of the Israel desk at the Cairo-based National Centre for Middle East Studies told IPS. “He understands well that any unilateral change to the status quo on the Egypt-Gaza border would have serious international repercussions, for which Egypt isn’t currently prepared.”

Therefore, Fahmi added, the new president “is likely to tread very, very cautiously on the issue.”

In May of last year, three months after Mubarak’s ouster, the closure of Egypt’s border with Gaza – first imposed by the Mubarak regime in 2007 – was eased slightly in a nod to post-revolution public pressure. A limited number of passengers from the strip were allowed to pass through the Rafah international border crossing, albeit only during certain hours and on certain days.

The crossing was, however, kept firmly closed to anything resembling commercial traffic. The flow of desperately needed commodities from outside – including foodstuffs, fuel and cement (the latter being necessary to rebuild the strip’s infrastructure, largely destroyed during Israel’s 2008/2009 war on the enclave) – continued to rely on subterranean tunnels under the Egypt-Gaza border.

In the months following last year’s Tahrir Square uprising, the complete opening of the Rafah crossing to all forms of traffic had been one of the political demands voiced by a number of Egyptian revolutionary groups. The country, however, was soon convulsed by domestic political upheaval, which included days-long street battles between the army and protesters, along with hard-fought parliamentary and presidential elections. The festering Gaza issue was relegated to the backburner.

But Morsi’s election in hotly contested June presidential polls appears to have brought the issue back to the fore. In statements made shortly before his election, Morsi, a long-time member of Egypt’s Muslim Brotherhood, of which Palestinian resistance group Hamas is a loose affiliate, stated that “the time has come to open the Rafah crossing to traffic 24 hours a day and all year round.”

Recent statements emanating from Hamas, which has governed the Gaza Strip since 2007, certainly suggest that a major change at the border is imminent.

On Jul. 13, two week’s after Morsi’s inauguration, Hamas political chief Khaled Meshaal expressed confidence that, along with “protecting the Gaza Strip from any would-be Israeli aggression,” Egypt’s new president “will open the border and end the commercial siege of the strip.”

On the same day, Ismail Heniya, head of the Hamas-run Gaza government, also voiced that confidence that Egypt under Morsi “would never provide cover for any new (Israeli) aggression on the Gaza Strip,” in a clear reference to the policies of Egypt’s ousted Mubarak regime. Nor would a Morsi-led Egypt, Heniya added, “continue to take part in the siege on Gaza.”

Statements by officials from the Muslim Brotherhood and its Freedom and Justice Party (FJP) likewise suggest that the days of the five-year-old border closure are drawing to a close.

“The FJP believes that Israel’s oppressive siege of the Gaza Strip must be eased and that Egypt’s participation (in the siege) must end,” leading FJP member Saad al-Husseini told IPS. “Egypt must take a firm position vis-à-vis Israel in this regard.”

Al-Husseini added that the FJP – which controls roughly half the seats in the lower house of Egypt’s (currently dissolved) parliament – had “no objections to opening the Rafah crossing to both passengers and commercial traffic, or even establishing a free-trade zone.”

But in light of geo-political realities – namely, Israeli and U.S. opposition to the notion of relaxing pressure on Hamas – some analysts believe that Morsi will adopt an extremely gradualist approach to the issue.

“Morsi is likely to run into resistance from Egypt’s deeply-entrenched intelligence apparatus, which views the Gaza border file as a security, political and intelligence issue, over which it – not the president – has jurisdiction,” said Fahmi.

Initially at least, Fahmi added, Morsi “is only likely to take a series of half-measures aimed at the gradual easing of restrictions on cross-border traffic.”

On Saturday, Jul. 28, Heniya, having met with Morsi two days earlier, said that the latter had agreed to “several measures” aimed at improving conditions in the Gaza Strip. These included increasing the Rafah crossing’s working hours to 12 per day and raising the daily limit on passengers from Gaza to 1,500.

Fahmi predicts that Morsi will also eventually open talks with other parties involved aimed at eventually opening the border up to commercial traffic.

“Morsi can’t just unilaterally open the Rafah crossing to commercial traffic without first discussing it with other relevant parties, namely, Israel and the (West Bank-based) Palestinian Authority,” he said.

“If the new president makes any serious changes in terms of Egypt’s Gaza policy, he will likely make them later on down the road,” Fahmi added. “But he will not make any dramatic moves in the short term while Egypt is facing so many domestic crises, political and otherwise.”

The FJP’s al-Husseini appeared to confirm this.

“Strategic decisions (like those regarding the Gaza border) aren’t the president’s to make alone,” he said. “Opening the crossing to commercial traffic, and thus ending the longstanding siege on Gaza, requires careful study of the political, economic and security-related implications of such a move.”