DOHA, Qatar, Jul 16 2012 - Russia has said it would block moves at the U.N. Security Council to extend a U.N. monitoring mission in Syria if Western powers did not stop resorting to “blackmail” by threatening sanctions against Damascus. 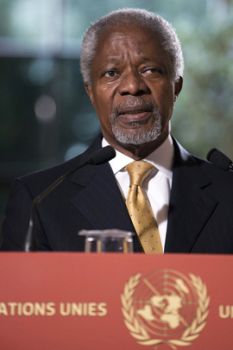 His comments are likely to dim Western diplomats’ hopes that Moscow is trying to find a face-saving way to drop its support for Assad and accept that he should have no role in a transition.

“To our great regret, we are seeing elements of blackmail,” Lavrov told a news conference before Annan started a two-day visit that will include talks on Tuesday with President Vladimir Putin. “This is a counter-productive and a dangerous approach.”

Meanwhile, Morocco has asked Syria’s ambassador to Rabat to leave the country, the foreign ministry said on Monday.

The Syrian government in a tit-for-tat response declared the Moroccan envoy to Damascus as persona non grata and asked him to leave.

There has been no let up in violence in Syria with parts of the capital, Damascus, under fire for a second day, activists have said, with government forces blocking roads in and out of the city.

Reuters news agency reports that the crackle of small arms fire echoes through the streets of Damascus.

Syrian troops backed by armoured vehicles were said to have advanced through the city centre, driving out rebels who had secured a foothold within striking distance of major state installations.

The military offensive on Monday reportedly continued to batter several neighbourhoods in the capital, including Midan, Tadamon – where snipers are reported to be positioned on rooftops – Kfar Souseh, Nahr Aisha and Sidi Qadad.

The LCC added that government troops and rebel fighters of the Free Syrian Army also clashed in the western Damascus district of Kfar Souseh.

The Britain-based Syrian Observatory for Human Rights reported “dawn battles on the road south of Kfar Souseh, between rebel fighters and soldiers who were in a convoy passing through the area”.

“I did not sleep all night,” a resident of nearby Jaramana told the AFP news agency. “It was a real war zone.”

The town of Qatana, 20km away from the capital, was also shelled on Monday. Elsewhere, government troops shelled the besieged Homs districts of Khaldiyeh, Jourat al-Shiah and Qarabees.

To the north, government forces raided the central city of Hama, scene of fierce clashes and a series of loud blasts, the Observatory said.

The government remains defiant, insisting it is defending its people and sovereignty.

Meanwhile, as the attacks on residential areas in Damascus continued, the International Committee of the Red Cross has said it now considers the Syrian conflict a civil war.

The Geneva-based group’s assessment could have implications for prosecutions for war crimes and means that international humanitarian law applies throughout the country, though it will have little effect on the ground. Also known as the rules of war, humanitarian law grants all parties in a conflict the right to use appropriate force to achieve their aims.

“We are now talking about a non-international armed conflict in the country,” ICRC spokesman Hicham Hassan said on Sunday.

Previously, the Red Cross committee had restricted its assessment of the scope of the conflict to the hotspots of Idlib, Homs and Hama. But Hassan said the organisation concluded that the violence was widening.

“Hostilities have spread to other areas of the country,” Hassan said. “International humanitarian law applies to all areas where hostilities are taking place.”

Josh Lockman, an international law professor at the University of Southern California, said the assessment does not make any significant difference on the ground, but is “of tremendous significance for the long term”.

“With this application of international humanitarian law to the conflict, key government officials could be held responsible for both massacres against civilians and also for the treatment of captured combatants, in this case rebel fighters, to the degree they’re abused, harmed or killed,” he told Al Jazeera.

Although the armed uprising in Syria began more than a year ago, the committee had hesitated to call it a civil war – though others, including United Nations officials, have done so.

That is because the rules of war override and to some extent suspend the laws that apply in peacetime, including the universal right to life, right to free speech and right to peaceful assembly.