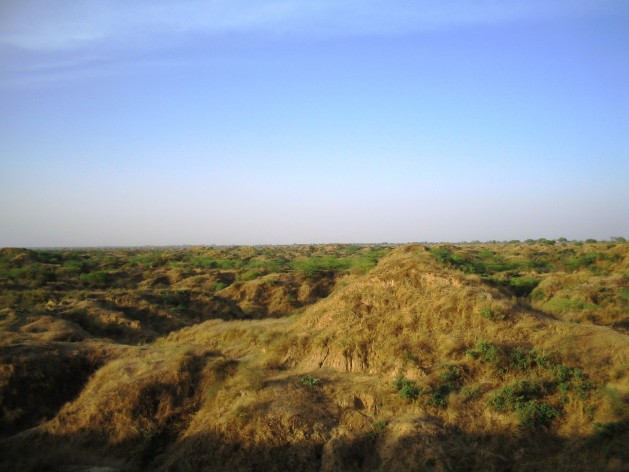 BUNDELKHAND, India, Aug 21 2012 (IPS) - Narrow, cobblestoned lanes separate the rows of mud houses with cool interiors and mud-smoothened patios, some with goats tethered to the wooden posts. This is Tajpura village, deep in this water-stressed, drought-prone region of northern India.

An area of stark beauty marked by deep ravines in central India, Bundelkhand spans the states of Uttar Pradesh and Madhya Pradesh. The ruins of stone fortresses dotting the landscape betray a history of constant warfare just as the remnants of water courses and irrigation systems speak of peaceable and prosperous times gone by.

Bundelkhand suffers from manmade problems, starting with the government’s misplaced land and water policies that have worsened an already stressed climatic situation caused by prolonged droughts and erratic rainfall.

Air dropping of ‘Prosopis juliflora’ seeds as a soil-conservation measure in the 1960s  resulted in the plant becoming an invasive species that killed indigenous shrubs and trees, making the soft soils of the ravines leach water rapidly and turned vast areas into wastelands.

Thoughtless promotion by the government of water-intensive crops like mentha (mint) encouraged richer farmers to dig deep tube wells while neglecting groundwater recharge, resulting in a disastrous lowering of the water table.

Drought is now a familiar spectre in this region and less than half of its one million hectare arable spread is now cultivable, causing distress to its mainly farming population of 50 million people.

“What you have is very high water consumption in an area suffering from water crisis,” says Anil Singh, coordinator of Parmarth, an organisation working to revive traditional systems of water and cropping among marginalised communities that inhabit the ravines of Bundelkhand.

In Tajpura village,  as though in denial of Bundelkhand’s stark conditions, 36-year-old Mamtadevi, wife of Ajan Singh, serves up a meal of steaming hot chappatis (Indian flat bread) smeared with clarified butter, a cool, green salad and a dish of smoked brinjal, boiled potato, fresh tomato and green chilli.

“That extra taste in the vegetables is because they are grown sustainably and without chemicals,” explains Mamtadevi.

Ajan Singh and Mamtadevi were among the first to adopt Parmarth’s ‘low external input sustainable agriculture’ (LEISA) which is now standing them in good stead as rainfall becomes scantier and average temperatures rises.

LEISA involves such practices as efficient recycling of nitrogen and other plant nutrients, managing pests through natural means, maintaining ideal soil conditions and ensuring that local farmers are aware of the environment and the value of preserving ecosystems.

The soundness of this method shows in the freshness of Ajan Singh’s vegetable crops, in biodiversity conservation through the use of hardy indigenous seeds and avoiding chemicals for maintaining soil health.

Ajan Singh is also able to beat the vagaries of the weather and this year’s drought, caused by failure of the monsoons, holds no great terror for him or for other farmers who follow LEISA.

Bhartendu Prakash, steering committee member of the Organic Farmers Association of India (OFAI) and in-charge of its northern branch based in Bundelkhand, says the region was hit by frost last winter but organic farmlands using LEISA were the least affected.

Parmarth helped the community in contouring the lands for rainwater run-off and storage and constructed a well for irrigation. Its volunteers also taught farmers like Ajan Singh how to make vermicompost and set up pheromone traps to catch insects.

Most farmers though, already had their own methods of making biopesticide – usually a mix of neem leaves and garlic soaked in buffalo buttermilk. “But before the pheromone traps were laid, the spraying had to be done once every three days, now once a week is  enough,” says Mamtadevi.

By 2009, the couple’s vegetables had such a reputation for quality that they sold at the local market 10 km away at higher than prevailing rates, earning them nearly 80,000 Indian rupees (then approximately 1,800 dollars) yearly.

Three years later, Ajan Singh bought another ‘bigha’ (approximately 2.2 acres) of land. He now takes his produce to two markets and also sells milk from five buffaloes that he bought with his earnings.

Along with this, the women of the community have banded together into self-help groups that maintain a savings and loan account to assist women find simple livelihood alternatives like livestock rearing.

The women also run a grain bank that sells surplus grain in the open market and give grain free to distressed families in times of need.

“We are now trying to link the community to government schemes wherever possible, such as obtaining sprinklers, and getting some benefit from the state-run Bundelkhand Relief Package which does help with drought-proofing,” says Anil Singh who works for Parmarth.

Released in 2009 by the federal government, the package worth 1.5 billion dollars supports rainwater harvesting, proper utilisation of river systems, irrigation canals and water bodies over a three-year period.

But Bundelkhand’s natural farming methods need to get more support as the funding period comes to an end.

“Bundelkhand is too entrenched in northern Indian chemical farming methods,” says OFAI’s Prakash. In contrast, OFAI is deluged with requests for training in organic farming methods from farmers in Punjab and Haryana, the ‘mother zone’ of the so-called ‘green revolution’ that transformed agriculture in India after introduction in the 1960s.

Rajesh Krishnan, campaigner for Greenpeace in India, is optimistic that the government will see the wisdom of promoting organic agriculture as a counter measure to the numerous fallouts of chemical agriculture that fuelled the green revolution.

Krishnan is hopeful for the probable financing of sustainable agriculture in India’s 12th Five- Year Plan, due to be rolled out in November.

Prakash is confident that sustainable agricultural farming will survive through a growing demand for organically-grown crops.