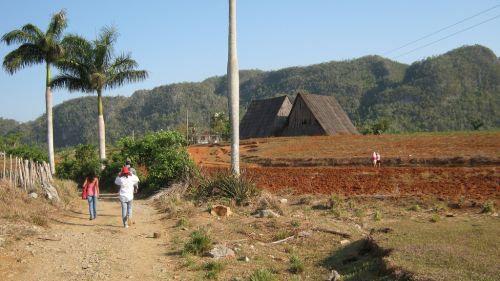 HAVANA, Aug 13 2012 (IPS) - Enrolment in Cuban universities fell by 25.8 percent during the past school year, as young people are being oriented toward fields with more employment opportunities, such as agriculture, in the context of sweeping economic reforms that are also affecting public education.

The changes to higher education include tougher university entrance exams, encouragement for students to major in the agricultural and technical sciences, fewer enrolment places in the humanities, and more training for technicians and skilled workers, to help boost production.

“It was a mistake to cultivate the idea for so many years that everybody should receive higher education,” journalist Elsa Claro commented on Café 108, the participatory section of the website of the IPS office in Cuba. She was referring to a deeply-rooted aspiration among Cuban families: that their children should attain at least undergraduate degrees.

The 2007/2008 school year, when almost 744,000 students enrolled, was the last one that saw growth for universities in this Caribbean island nation. Enrolment began to drop during the following year, reaching a little over 351,000 in the 2011/2012 school year, the first one affected by the more difficult entrance exams.

However, the largest drop was seen at municipal university campuses, which began operating (under a different name) in 2000. Their student bodies, which were principally enrolled in social science courses, shrank by 51.2 percent in the most recent school year, according to the ONEI.

Currently, 123 campuses of this type are operating nationwide – just one-seventh of the number operating in 2008. Enrolment is prioritised for students who are studying for careers in technical fields and agriculture, in an effort to ensure greater quality and economic rationality, according to a report that the Higher Education Ministry presented to parliament in July.

In recent years, there were large quotas of university slots for careers in teaching, medicine and the social sciences. Now that situation has changed; the enrolment plan for the 2012/2013 school year provides more opportunities in technical fields and agriculture and reduces places in the humanities by more than 40 percent.

The goal is to strengthen and prioritise the training of technical personnel, who are needed for reviving the country’s production sector. Three school years ago, enrolment in technical fields totalled just 2,077 students; in the 2011/2012 school year that number climbed to 60,000, and is expected to continue rising in the coming school year.

The Cuban university system is “being transformed” and is increasingly part of economic and local development processes, said Olga Lidia Tapia, a member of the Communist Party of Cuba’s Central Committee Secretariat, according to local news reports about the end of the school year.

The “updating” of the country’s economic and social model that has been promoted by the Raúl Castro government since 2008 began with different measures in agriculture, which authorities consider to be a key sector in that process, and where one of the goals is to grow more food to reduce dependency on imports.

For that reason, education authorities are designing strategies for vocational guidance, from primary to pre-university education, in an attempt to encourage the new generations to choose trades and professions that are related to production, especially in agriculture.

High school graduate Adrianet Acosta, one of 35,242 students who took the entrance exam, chose agronomy at the last minute. After much effort, she obtained one of the 40 places assigned to her province, Mayabeque, which borders Havana on the southeast.

“This is what the country needs, and I want to graduate with a profession where there are jobs,” Acosta told IPS regarding her decision. She became enthusiastic after a meeting with agronomy students and professors and visits to two agricultural research centres that were organised by her school, she said.

Authorities are trying to get people to take a fresh look at agriculture. “People identified work in the countryside with a low level of education, distant from science and closely connected with poverty,” Professor Esteban Morales told IPS. It stopped being attractive even for farmers’ children, he noted.

Sometimes he feels a bit more interested, but Yosvany Martínez still has not resigned himself to studying agronomy. He dreamed about a pharmacy degree, but did not have the grades to obtain the only place in that field assigned for pre-university students in Mayabeque.

He knows about farming: he does “a little bit of everything” on his father’s farm in his free time.

“In the countryside there’s so much work to do, that’s why I don’t want to go down that road,” Martínez told IPS in response to the question of why he does not want to continue the family tradition and become an agronomist.

During the 1960s and 1970s, Cuba developed production programmes that encouraged students to go into agriculture. But “in the 1980s, the idea began to become entrenched that it was not worth it, economically speaking, to develop and diversify agriculture if it was cheaper to import,” said journalist Roberto Molina.

According to Molina, who participated in Café 108, that idea led to an exodus of students from agriculture toward fields like medicine, biotechnology, computer science and tourism. With more incentives in the countryside and “effective propaganda,” it might be possible to “get young people interested in the agricultural sciences,” he said.