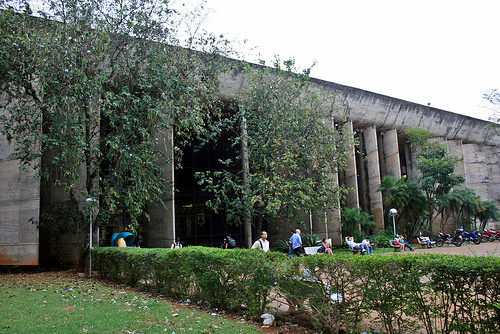 RIO DE JANEIRO, Aug 15 2012 (IPS) - A new law about to enter into effect in Brazil will reserve half of all admission slots in public universities for students who attended public primary and secondary schools. But the measure, aimed at expanding access to the country’s best universities, will require structural reforms.

Pablo Gentili, director of the Latin American Faculty of Social Sciences in Brazil (FLACSO-Brazil), said the law was “a step forward in the democratisation of education, and in a broader sense, of Brazilian society as a whole.”

The bill, passed Aug. 6 by the Senate with just one vote against, after 13 years of debate in the legislature, is now waiting to be signed into law by President Dilma Rousseff.

“The quotas will make access to public higher education – the best quality education – possible for sectors of society that have historically been excluded from it,” Gentili, author of the essay “Pedagogy of Equality”, published in 2011 by Siglo XXI in Buenos Aires, told IPS.

In Brazil, public universities generally offer the best quality higher education. But at the primary and secondary school level, families from the middle and upper classes tend to send their children to private institutions.

Gentili, an academic from Argentina, cited statistics reflecting the unequal access of people from the poorest segments of society to coveted slots in Brazil’s federal public universities.

In this country of 196 million people, half of the population self-identifies in the census as black or mixed-race. But only 10 percent of that group, which is the segment of the population with the highest poverty rate, makes it to university.

“Educational opportunities are distributed in an unequal fashion because social opportunities, decent living conditions and rights are also unequally distributed and enjoyed in Brazil, one of the most unjust societies on the planet,” Gentili said.

“Behind the ‘meritocracy myth’ is hidden the reality of a country where the expectations and demands of the poor for social mobility and progress are frustrated on a daily basis. The poor do not have access to the places they covet, which are monopolised by the rich and privileged sectors,” he added.

The increasingly elitist nature of public universities was also underscored by Marcelo Paixão at the Economics Institute of the Federal University of Rio de Janeiro.

Paixão, who specialises in the issue of racial inequality in education, told IPS that he could “never be opposed to” the content of the new law. But he added that it did present a major challenge, which public universities would have to prepare for.

The quota law gives the country’s 59 federal universities four years to bring their admissions processes into line with the new rules. But within the next year, at least 25 percent of the slots must be reserved for students from public schools.

“Brazil’s universities, which are mainly public, are not prepared to receive a more socio-economically and racially diverse inflow of students” said Paixão.

“One thing is giving class to the children of the elites, who are better prepared to deal with issues that require, first and foremost, family and cultural capital. But it is a very different thing to teach people with a low level of cultural and family capital, and to have to invest in them in order for them to reach the same performance level as the rest,” he said.

The law also establishes that half of the slots reserved for public school graduates must go to youngsters whose family income is less than one and a half minimum salaries, equivalent to 450 dollars a month.

Furthermore, within that segment, priority must be given to students who self-identify as black, mulatto or indigenous, proportional to the ethnic makeup of each of the country’s 26 states.

The racial quota system began to be used in Brazil a decade ago, when the first affirmative action law was approved in the state of Rio de Janeiro.

Today, more than 80 universities have some kind of affirmative action policy in place. In particular, over half of the federal universities already have some sort of system to improve access by low-income and minority students, Gentili noted.

“Racial and social quotas are simplu an emergency measure adopted in an attempt to correct an injustice,” said the director of FLACSO-Brazil.

The new law requires a comprehensive review of the quota system, a decade after it begins to function.

The National Federation of Private Schools announced that it would go to court to challenge the new law, which it considers discriminatory because it establishes different opportunities for access to university.

“Today, private schools serve the socio-economic levels A, B, C and D, in low-income communities as well,” the Federation’s president, Amábile Pacios, told IPS. “A child cannot be penalised for that.”

Pacios pointed to the difficulty that Brazilian employers run into, hiring employees “who can barely do the four basic math operations, or cannot satisfactorily take down a 10-word dictation.”

“A country that needs a quota system assumes that public schools are bad quality,” said Pacios. She predicted that, contrary to expectations, the new law would “strengthen private universities because they will begin to receive the best students,” who have been excluded from public universities because of the quotas.

Gentili rejected that argument and other “anti-democratic prejudices,” such as claims that poor students bring down the quality of a university once they begin to have access to it.

“The poor understand the value of a university education,” he said. “Precisely because of that, when they do make it in, they make an enormous effort (to overcome) years of weak secondary education.”

The expert stressed that after a decade of affirmative action policies, none of the universities that adopted such measures has experienced a decline in the quality of education. On the contrary, he said, “the quality indicators have improved in almost all of them.”

Gentili does not believe it is necessary to wait for “primary school to improve, in order to make public university education more democratic.” In his view, “both challenges should be addressed simultaneously, in a coordinated manner.”

That is also what Paixão would like to see, in order for the new law to contribute to “strengthening democracy, improving the distribution of income, and expanding opportunities for social mobility.

“Now that public universities will have to accept public school students, maybe Brazil will change its historical neglect of public schools,” he said.