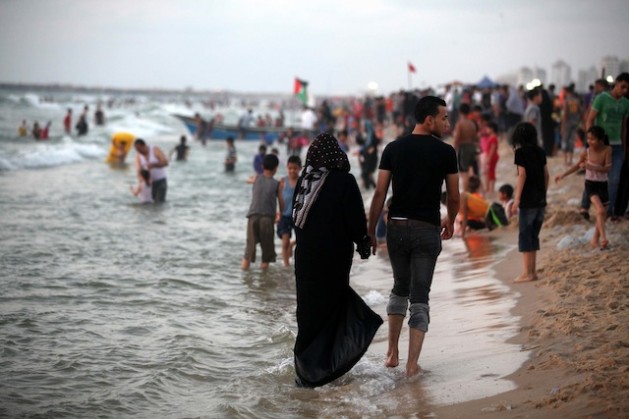 Many of the young in Gaza find marriage through a tunnel into Egypt. Credit: Mohammed Omer/IPS.

GAZA CITY, Aug 27 2012 (IPS) - Mai Ahmed, a 26–year-old from the West Bank fell in love over the Internet with Mohammed Warda from Nussirat refugee camp in Gaza after they ‘met’ on the Internet. The Israeli government refused permission for her to travel to Gaza. Mai travelled to Jordan, flew from there to Egypt, drove across the Sinai, and then crossed through a tunnel into Gaza, where she now lives. “It’s a story I will tell my grandchildren,” she says.

Brides and bridegrooms are now being smuggled through the Gaza tunnels, to add to the usual fare of medicine, food, bread, refreshments, car parts, cement, and fish and sheep.

Abu Saleem, a 29-year-old digger at the Gaza tunnels under the border with Egypt says he is seeing an increasing number of brides coming in from Egypt, and grooms being smuggled through the other way. Only last week he received a phone call from his boss asking him to assist a young Egyptian bride on way to her groom in Gaza.

It’s cheaper to find a bride in Egypt than in Gaza.

Adel Al-Ahmed, 37, is happy with his Egyptian wife Shymaa after he found he could not afford the dowry for a Gaza girl. “It is relatively cheaper dowry in some areas in Egypt, and there is more acceptance by some young Egyptian women to live in simple and modest conditions,” he says.

Difficulties obtaining travel permits and visas have made the tunnels a lifeline to cross to and from Egypt. A recent side effect is the increasing number of Gaza youths who leave the 140 square kilometre Gaza strip to search for brides.

Tunnel owners in Rafah would earlier transport women and children like cargo in re-fashioned barrels. Now, people crawl or walk, depending on the structure of the tunnel.

The tunnels are considered illegal in Egypt, but are a vital part in the life and commerce on both the Gazan and the Egyptian side. Palestinians consider the tunnels a legitimate trade and passenger route under the Israeli siege.

That makes marital unions a risky business. Brides and grooms using tunnel access also require a permit from the de facto government in Gaza, or the tunnel owner can be fined 1,500 dollars.

Adel married a Palestinian girl, but divorce followed due to “family demands”. He has since remarried after finding a new bride through his sister, who married an Egyptian in El-Arish.

“I went to a wedding in Egypt, and was introduced to a wonderful young woman who I later married.” Adel took the tunnel route. Once married the young couple had to crawl to Gaza on their hands and knees for about 200 metres in a tunnel to cross the border.

With the money he saved in paying an Egyptian rather than a Palestinian dowry, Adel could furnish an apartment in Rafah. “I would advise Gaza youth to get married to Egyptian women,” he says.

Adel paid 30,000 Egyptian pounds (about 5,000 dollars) in dowry, but the conditions of marriage are “way easier and less demanding.”

Many have ventured as Adel did. Ahmed, who gave only his first name, crossed into Egypt though a tunnel and met a young Egyptian woman while visiting relatives. A few weeks later he returned and asked his family to propose to her. “Tunnels have made it easier for me to get married outside of Gaza,” he tells IPS.

Ahmed had proposed earlier to young Palestinian women in Gaza, but he was asked for a separate apartment as a condition to marriage. “This demand never happens when I, or my friends, ask for the hand of an Egyptian girl.”

Hadeel, a young Palestinian woman from Rafah in her mid-twenties became friends with an Egyptian girl during an official NGO visit. A few months later Hadeel’s friend informed her that her brother and family would like to visit Gaza through the tunnel.

They came over and Hadeel met her friend’s brother. Several tunnel visits later, he proposed. They are due to get married in October. Hadeel will move to Egypt.

For many Gazans, there is both love, and light, at the end of these tunnels.