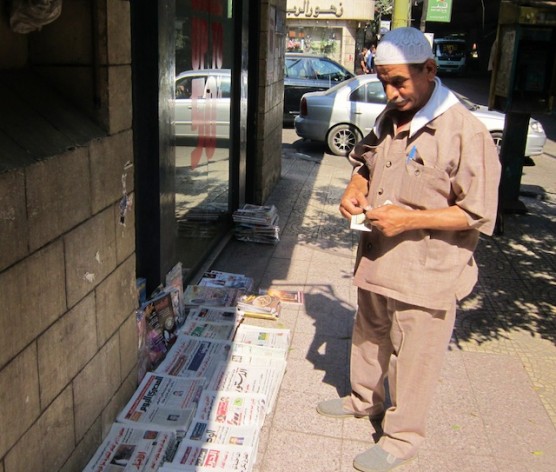 CAIRO, Aug 25 2012 (IPS) - The former regime of Hosni Mubarak tightly controlled the press and intimidated journalists who dared to criticise it. Now it appears the Muslim Brotherhood has adopted similar tactics to stifle dissent.

Commentators have accused the once-banned Islamic movement, whose leaders have risen to control Egypt’s parliament, presidency and many state institutions, of using its new political muscle to dictate media policy and appointments. In recent weeks, the group has extended its influence over the state press while allegedly attempting to silence journalists who hold critical views against it.

“We’re seeing an escalation (in pressure) by those affiliated to the Muslim Brotherhood against freedom of expression in Egypt,” says Sherif Etman, spokesman for the Egyptian Organisation for Human Rights (EOHR). “They’re using some of the same techniques to repress the media as Mubarak.”

Mubarak’s authoritarian regime used draconian press laws and a complicit state media apparatus to vilify Islamist groups and other political opponents. Although the dictator was toppled during an uprising last year, Muslim Brotherhood leaders have accused public media institutions of perpetuating old biases. They also warn of a negative media campaign to undermine the country’s newly-elected Islamist president, Mohamed Morsi, who was a senior member of the Brotherhood’s political wing before taking office.

Earlier this month, Morsi revealed that his cabinet would include an information ministry, a tool successive Egyptian regimes used to set the editorial line of state television channels. His selection of Salah Abdel Maqsoud, a Brotherhood member, as minister fuelled suspicions that the group was seeking to exert influence over public broadcasters.

Critics also accuse the Muslim Brotherhood of using the group’s dominance in the Shura Council, the upper house of parliament, to tighten its grip over the state press. In June, the Council formed a 14-member committee headed by a Brotherhood MP to select new chief editors for 45 state-run publications.

Several journalists resigned in protest against what they described as a flagrant attempt by the committee’s Islamist members to manipulate the selection process and force through their own candidates. They complained that many of the appointed editors did not meet the established criteria and were chosen for their predisposition to serve the new Islamist-led government, rather than their professional calibre.

Media activists claim the new chief editors moved swiftly to impose an editorial line that ensures favourable coverage of the new president and the Muslim Brotherhood.

“If you compare the last issue (of each publication) produced under the old editor with the first issue of the new one… it’s obvious that they wanted to prove their loyalty,” Abeer Saady, deputy head of the Journalists’ Syndicate told IPS.

Within hours of taking office, the new chief editor of the flagship state newspaper Al-Ahram cancelled a page that tracked how the president was faring in fulfilling the promises of his first 100 days in office. No reason was given.

Mohamed Hassan El-Banna, the new chief editor of state-run daily Al-Akhbar, summarily axed an opinion page known for its criticism of the Muslim Brotherhood. El-Banna denied any attempt to mute opposition to the group, claiming the decision was solely due to space considerations.

Several columnists at the paper have complained of censorship. One literary critic said editors asked her to tone down an article in which she criticised the Brotherhood for attempting to dominate the state and its apparatuses. El-Banna reportedly said he was willing to accept the critique, but the article was pulled after the writer refused to change the offending phrase, “journalism has worn a veil.”

Aside from accusations that the Muslim Brotherhood is attempting top-down control of state media, the organisation has also come under fire for allegedly orchestrating a crackdown on media outlets critical of the group and its interests. In recent weeks, Morsi’s government has taken steps to suppress critical news coverage and prosecute opposition journalists using Mubarak-era laws.

On Aug. 11, authorities confiscated copies of Al-Dustour newspaper and sent its editor – an outspoken critic of the Muslim Brotherhood – to criminal court on charges of insulting the president and fuelling sectarian strife. Days earlier, the privately-owned television station Al-Faraeen was taken off the air on charges that Tawfik Okasha, its owner and leading presenter, had attempted to incite viewers to assassinate the president.

Media activists have described Al-Dustour’s editorials as spiteful and inflammatory, while Okasha is a former Mubarak loyalist infamous for his conspiracy theories and venomous rants. Yet despite the unflattering descriptions, the activists condemn the way authorities acted to silence them.

“It’s not that we’re for or against the Al-Faraeen channel, what worries us is that it was shut down by an administrative decree rather than a court ruling,” says Saady. “Even Mubarak didn’t do that – or at least not till the end of his 30-year rule. If (Morsi’s government) starts like this then how will they end?”

The Muslim Brotherhood has repeatedly denied any intention to censor or suppress critical opinion. Leaders say the group respects freedom of expression, but lines must be drawn when journalists irresponsibly defame the president, call for violence, or stir sectarian tensions.

Information minister Abdel Maqsoud would seem to agree. When questioned about the confiscation of Al-Dustour and closing of Al-Faraeen, he regretted that freedom of expression must have limits.

“There is a clear difference between freedom on the one hand and libel, slander, character-assassination and incitement to murder, on the other,” he said.

But a spokesman for the group emphasised that the majority of legal cases are initiated by citizens unaffiliated with the Brotherhood who are “upset about the disgusting insults” that some media outlets have been spreading.

Activists accuse the group of tacitly encouraging its followers to file lawsuits, and to harass and intimidate its detractors.