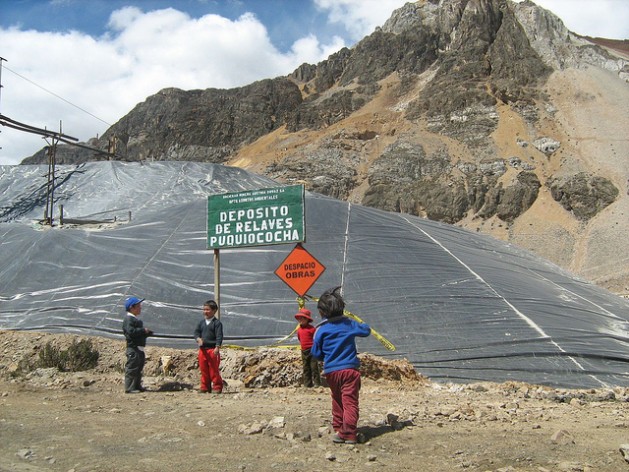 Children exposed to mining industry pollution in Peru. The debate on mining is raging throughout Latin America. Credit:Milagros Salazar/IPS

WASHINGTON, Sep 27 2012 (IPS) - New research from Oxfam, an international aid agency, finds that some of the largest multinational oil and mining companies are increasingly incorporating principles of community consent into their day-to-day operations.

Oxfam’s researchers looked at 28 of the world’s largest extractives companies and combed through their publicly available commitments to addressing the issue of community rights. They used the information to come up with a ranking – the Community Consent Index – that, coupled with a similar report from 2009, can now be used as baseline data.

The report does not rate the implementation of these policies, however, and its selection does not include any companies that have not specifically and publicly set out policies or positions on community engagement. Rather, Oxfam says that the index is supposed to incite and inform dialogue going forward.

“Community consent has been a very slippery concept over the years, and having a (preliminary) framework … is a really important start,” Raymond C. Offenheiser, president of Oxfam America, said in unveiling the new paper here in Washington on Wednesday.

“In order for oil and mining companies to survive in the coming decades, they need to transform themselves from primarily resource extractors to development partners. Companies that fail to implement the policies will be at a competitive disadvantage.”

Over the past three decades, the turnaround in the industry’s view on community engagement – at least insofar as the top players are concerned – has indeed been striking.

It was only in the early 1980s that the World Bank began discussing environmental impact, assessment of which is now required on virtually all foreign- or donor-funded projects in the world. Recent years have also seen international covenants on the rights of indigenous peoples over their traditional lands.

“Where are we today?” Offenheiser asks. “Admittedly, controversies still exist. But now we talk about ‘host communities’ rather than ‘drilling sites’, about a ‘shared-value approach’ that assumes that there is a connection between communities and companies. These would not have been on the agenda 30 years ago.”

In that time, local communities and civil society activists have become increasingly vocal and empowered in asserting their rights. In turn, this has both led to and been backed up by a raft of new international conventions as well as policies within international financial institutions, most notably the International Finance Corporation, the private-sector arm of the World Bank.

In recent weeks, both the United States and the European Union have also moved forward on legislation that will vastly increase transparency regulations in the extractive industries, specifically with an eye to how those industries affect communities on the ground.

“That said, it’s important to recognise that advancing this discussion is more critical than ever – I think we’re living in a moment of urgency,” Offenheiser cautions. “Due to the current explosion in the demand for natural resources … companies are extending their reach into remote and sensitive areas. This issue has to be raised by civil society organisations, business and government in ways that it hasn’t been in the past.”

“Why are companies doing this, and why are investors interested in us doing this?” Chris Anderson, with the mining giant Rio Tinto, one of the companies included in the new report, asked at a panel discussion on Wednesday.

“The simple answer is we’re not going to have any business otherwise. If you don’t adequately consult with a community and they don’t want an aspect of your project, you just don’t have a project and therefore you may not have a business.”

Among upper-level management in the sector, Anderson says that the realisation that communities “can become full, proper partners in the development of these projects” has set in only within the past decade. Now, however, he says “We’ll think back in five or 10 years, on the company side, and think, ‘How dopey could we be?’”

While lauding the new report, he also warns that Oxfam’s selection of companies has “skewed” its findings.

“You’re not looking at the worst actors, and there are plenty still around,” Anderson says. “We need to raise the bar … we’ve come a long way, but we have a long way to go to operationalise the notion of consent.”

Indeed, while Oxfam’s findings highlight optimistic trends overall, even such “skewed” results show that the discussion is still in its early phase.

Of the 28 companies, Oxfam’s researchers found that two-thirds have incorporated provisions of community consent, social license or broad community support into their development activities. Thirteen have either directly or indirectly (by agreeing to comply with various international agreements) said they would operate under the directives of free and prior informed consent (commonly referred to as FPIC).

All but two of the 28 companies reference the Universal Declaration on Human Rights in their public websites and annual reports, and all but five publicly commit to the rights of indigenous people. While about half of the companies commit to minimising involuntary resettlement, fewer have actual policies on resettlement and just two have made those policies publicly available.

“It’s clear that companies are now paying attention to the impact on communities – it’s standard practice now for the vast majority to have a human rights policy,” one of the report’s authors, Marianne Voss, said at the discussion on Wednesday.

Still, she reports, some companies are using “qualifiers that weaken the weight of their commitments”. Others say they will apply the principles of free and informed consent only where local law requires it or where governments have implemented it.

Nonetheless, she and others suggest, the direction of the discussion seems to be moving in one direction.

“Raised marks indicate that international investment can play a vital role in poverty reduction and development and, if done correctly, can be a good partnership between communities and business,” she says.

“While few extractive companies currently go as far as explicitly committing to FPIC, they’re going to be under increasing pressure to adopt them in the future. The growth of the minerals sector in developing countries and the fact that they’re going into more sensitive areas is going to broaden the demand moving forward.”