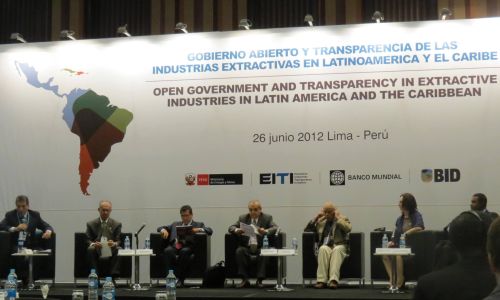 LIMA, Jun 29 2012 (IPS) - Peru was certified as compliant with the global standard of the Extractive Industries Transparencies Initiative (EITI) earlier this year. However, its achievements have not satisfied the demands of the local population in mining and oil extraction zones.

Some 60 delegates of the international EITI board met in Lima on Wednesday and Thursday Jun. 27-28 to evaluate the adoption of stricter standards, because the activities of the mining and oil industries in Peru are not translating into sustainable development in local communities.

The sessions were marked by lengthy debates between representatives of the government of President Ollanta Humala, mining companies, civil society organisations and multilateral bodies like the Inter-American Development Bank (IDB) and the World Bank.

Peru is the first country to qualify as EITI-compliant in Latin America, the region with the fewest governments participating in EITI, although it is hoped that more countries will gradually join the initiative. Colombia has recently committed to implement EITI, while Guatemala and Trinidad and Tobago are aiming for compliance.

Most stakeholders agree there is a need for new measures in order for transparency to have an effect on people’s lives.

“Instead of just providing transparent information about revenues from natural resources, people really need to know how the resources are distributed and used,” economist Epifanio Baca, a leader of the Citizen Proposal Group (GPC), a member of the international EITI Board and a representative of civil society on the Peruvian EITI National Committee, told IPS.

“Accounting for how the income is spent is essential because it has a positive impact on improving people’s quality of life,” he said.

Founded in 2002, EITI is a global effort to get extractive industry companies to publish information about their tax and non-tax payments to the state, as a means of avoiding corruption.

So far, 35 countries have joined the initiative and 14 have been certified as compliant with the transparency standards, including Peru.

But being able to see how much the government is receiving from companies extracting natural resources has not diminished discontent among people living in mining or oil extraction areas, as Humala recognised Tuesday Jun. 26 at a conference on “Open Government and Transparency in Extractive Industries in Latin America and the Caribbean,” which preceded the EITI board sessions.

“It is still not enough to heal the cracks and fissures in our social fabric that date back to the birth of our republic. We need to do more,” Humala said.

In recent years Peru has lived through considerable social upheaval. During the government of president Alan García (2006-2011) the number of social conflicts shot up from a total of 82 in June 2006, to 217 in June 2011.

Most of the conflicts were over social and environmental issues, and they have taken a heavy human toll: close to 200 people were killed and over 2,000 were injured during protests between January 2006 and September 2011, according to reports from the ombudsman’s office.

Prospects have not been much more encouraging during the Humala administration, which has still not won over opponents of the controversial Conga mining project planned by Minera Yanacocha in the northern department (province) of Cajamarca., owned by the Colorado-based Newmont Mining Corporation.

Humala has just given the green light to the Conga project, which is not surprising since the extractive industry accounts for 75 percent of the country’s export earnings, according to Minister for Energy and Mines Jorge Merino.

EITI partners agree that transparency in extractive activities could contribute to calming social conflicts, not only in Peru but also in other Latin American countries.

Meanwhile, some civil society organisations belonging to the international EITI board argue that it is necessary to raise its standards and to decentralise information.

Baca said regional and municipal governments should also be held accountable and be required to provide accurate, comprehensible and straightforward information.

Kurt Burneo, a former Peruvian minister of production, agreed with Baca. “If you want social legitimacy, you have to build trust, and this will not happen without transparency,” he told IPS.

Carlos Aranda, technical services manager for the Southern Peru Copper Corporation and a business representative on the EITI-Peru National Committee, said it was important for companies not to hide behind anonymity, but instead to provide more and more information.

“Transparency is important, but we can’t report environmental impact studies in the main square, so that everyone can hear all about them. We can’t carry on suspecting everything and everyone and presuming there is always a deal going on under the table,” Aranda told IPS.

But the problems of distrust and disputes involving extractive industries are not exclusively a Peruvian preserve.

Célica Hernández of the Jubilee Foundation, a Bolivian NGO, told IPS that at the end of 2011, 2.2 billion dollars of natural resource revenues had not been disbursed by the various government agencies in Bolivia, an amount similar to the national income from oil and gas operations.

“Bolivians are really angry about this,” Hernández told IPS in a break between meetings. Bolivia has not joined EITI, but civil society groups are working to promote transparency.

In Colombia, too, conflicts are breaking out in some areas, according to Carlos Andrés Cante, the head of “mining formalisation” – responsible for regulating artisanal mining – in the Ministry of Energy and Mines. However, Colombia is still experiencing a boom in exploration, since most mining projects have not yet reached the production stage.

The countries of the region are progressing at different rates, but “increasingly, companies and governments are realising that no advances in this area can be achieved while secrecy and lack of legitimacy persist,” Baca said.