UNITED NATIONS, Sep 17 2012 (IPS) - Myanmar, also known as Burma, has taken important steps towards democracy and greater respect for human rights during the last months with one exception, activists say – the situation for the Rohingya minority, which has faced an outburst of violent attacks this summer. 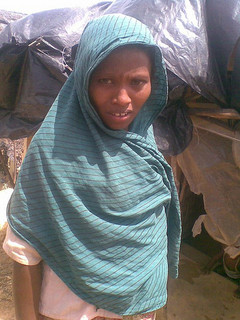 A Rohingya woman in a refugee camp. Credit: Rohingyarefugeebangladesh/cc by 2.0

Activists are now hoping that opposition leader Aung San Suu Kyi will raise awareness of the issue when she visits the U.S. this week.

“I think she has a real opportunity to influence the debate,” Elaine Pearson, deputy director of Human Rights Watch‘s Asia division, told IPS after speaking at an event about Myanmar held at Columbia University in New York City on Friday.

“She has not been raising the question enough. She has been quite vague. She is a politician now, and these issues are highly divisive. I think she has concerns about taking a stand. But it is important to speak out,” Pearson continued.

Myanmar, a former British colony, was shaken by a military coup in 1962. Since then the country has been controlled by oppressive military governments.

But after decades of military rule a new, quasi-civilian government took office in early 2011. In April this year, another step towards democracy was taken when relatively free parliamentary by-elections were held. The famous opposition leader Aung San Suu Kyi won a seat in the Parliament, along with several dozen other members of her National League for Democracy (NLD).

Aung San Suu Kyi has been a uniting force of the democratic opposition in Myanmar since the late 1980s. Due to her popularity, she has spent most of the two past decades detained under house arrest. She was unable to go Norway to collect the Nobel Peace Prize she was awarded in 1991. In 2010 she was released. And now she is a member of Parliament.

Pearson recently visited Myanmar on the behalf of Human Rights Watch, and says there have been positive developments in the country, such as land reform, the release of political prisoners, and newspapers reporting relatively freely on topics that were not being covered before.

“I saw progress that would have been unthinkable just 12 months ago,” Pearson said. “But progress is mainly restricted to Rangoon. For the majority of the population in Burma, the situation remains the same. And in Arakan it has gone from bad to worse.”

As IPS reported in June, clashes between the Muslim Rohingya minority and ethnic Buddhist Burmese broke out in the Arakan region in Myanmar after a story spread about a Buddhist woman being raped by three Muslim men. The violence is still going on.

“We see beheadings and stabbings between neighbours, parts of cities burnt to the ground,” Pearson said.

The Nobel Prize-winning economist Amartya Sen, also invited to the event at Columbia University, expressed his deep concerns about the situation.

“There are many things to celebrate in Burma right now. But there are also difficulties,” he said, calling the persecution of the Rohingya “an enormous problem”.

Sen said mobs of ethnic Burmese are attacking the Rohingya with the help of the military. “The security forces do not secure. Instead they commit violence,” he said.

Wakar Uddin, director general of the Arakan Rohingya Union, an umbrella of 25 different associations representing the Rohingya minority around the world, agreed.

“Massive ethnic cleansing is taking place as we speak today,” he said. “It amounts to genocide.”

Uddin called for an immediate stop of the violence, but also for more long-term solutions, such as giving the Rohingya the right to citizenship in Myanmar, and an improvement of their living conditions. Uddin brought up extreme poverty, forced labour, arbitrary arrests, land confiscations, mass rape and torture as some of the most burning problems.

He said some 1.5 million Rohingyas out of a total three million are living under abysmal conditions in Myanmar. Another 1.5 million externally displaced live under very hard circumstances in neighbouring countries. Uddin urged the Burmese government to give the refugees the right of return.

T. Kumar, director of Amnesty International USA, said he was “appalled about what is happening”. Kumar was especially concerned about curfews for the Rohingya in the Arakan province. “They are locked up in villages. It is a new form of detention,” he said. “Even if they are sick, thay can not go to see the doctor… There are people dying because of the restrictions. And imagine the impact on the kids, they can not go to school.”

According to Elaine Pearson, the Burmese government is doing very little to solve the alarming situation. They have initiated a report on the sectarian violence, but Pearson deems the commission being charged with writing the report insufficient. ”There has been no accountability of the abuses committed by the state security forces. The government is not looking into the citizenship law. And I see partiality and bias of members of the commission.”

“The government has clearly failed in addressing these issues… I think there will be a long, rocky road before we see peace,” Pearson said.

Pearson was also sceptical about some peace agreements being signed between the government and ethnic guerillas in Myanmar. She expressed concerns about what she called “cease-fire capitalism”, referring to a phenomenon of the government and guerilla leaders dividing natural resources between them.“I have a concern that the ethnic minorities will loose out in all this,” Pearson said.

A stream of hope is the news that Aung San Suu Kyi will be arriving in the U.S. this week. From September 18 until October 2 she will hold a number of speeches and take part of several meetings about the situation in Myanmar.

“Aung San Suu Kyi is the person who has the moral authority to ask for a respect for basic human rights. I hope she will take a more active stance on these issues”, Pearson concluded.