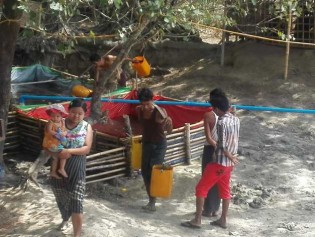 By Carey L. Biron
Myanmar’s President Thein Sein on Monday became the first leader of that country in almost a half-century to pay a call on the White House, a visit that has simultaneously highlighted a series of monumental changes seen in Myanmar in recent years as well as a reforms process that many are warning may have stalled.

By Carey L. Biron
The International Finance Corporation (IFC), the World Bank Group arm that focuses on the private sector, announced Wednesday that it would be backing a new microfinance institution in Myanmar aimed at reaching 200,000 people by 2020.

By Carey L. Biron
Worried over the possibility of further escalation of armed conflict in Myanmar, activists here are calling on Washington to take stronger action to condemn state forces for aerial bombardment of ethnic Kachin rebels and civilians in the country’s north, which some say constitutes crimes against humanity.

By Carey L. Biron
With a new surge in sectarian violence in western Myanmar estimated to have killed more than a hundred people in recent days, top officials in the United Nations are criticising the Myanmar government for dragging its feet on addressing the “root cause” of a conflict that could disrupt the delicate reforms process underway in the country.

By Carey L. Biron
Speaking on Tuesday at her first public address in the United States, Myanmar’s opposition leader, Aung San Suu Kyi, said that she supported the lifting of the last remaining U.S. economic sanctions on her country, but also warned that all remaining political prisoners need to be released.

By Becky Bergdahl
Myanmar, also known as Burma, has taken important steps towards democracy and greater respect for human rights during the last months with one exception, activists say – the situation for the Rohingya minority, which has faced an outburst of violent attacks this summer.

By Carey L. Biron
Following on a May announcement, the U.S. government on Wednesday moved to implement its most significant rollback in longstanding sanctions on Burma, also known as Myanmar.

By Jim Lobe
The outbreak over the past week of communal violence between Buddhists and Muslims in Rakhine State seriously threatens the ongoing reform process in Myanmar, according to experts here.

By Timothy Spence
Extraordinary political changes in the year since former army general Thein Sein came to power in Myanmar have prompted European powers to ease restrictions on the isolated nation, raising questions whether such rewards are too little or too much.
Next Page »
ADVERTISEMENT ADVERTISEMENT