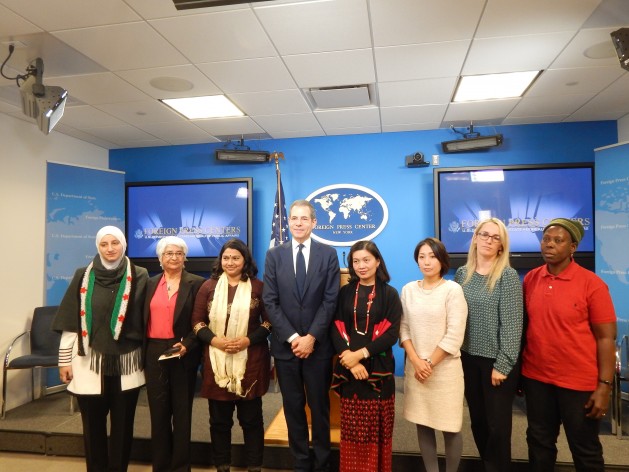 Seven of the ten recipients of the 2015 U.S. Secretary of State’s International Women of Courage (IWOC) Award pose together with Richard Stengel, Under Secretary for Public Diplomacy and Public Affairs. Credit: Kanya D’Almeida/IPS

UNITED NATIONS, Mar 13 2015 (IPS) - On Apr. 6, 2013, Nadia Sharmeen, a crime reporter, was assigned to cover a rally organised by Hefazat-e-Islam, an association of fundamentalist Islamic groups in Bangladesh whose demands included a call to revoke the proposed National Women Development Policy.

When Sharmeen arrived, she directed her cameraman to get a shot of the crowd and proceeded to interview some of the attendees.

“They beat me, they took all my valuables. They threw me to the ground four or five times. They tried to tear off my dress. They wanted to kill me – that was their main goal.” – Nadia Sharmeen, a Bangladeshi journalist attacked by a mob of 60 men while covering a rally by the fundamentalist group Hefazat-e-Islam in 2013
“Suddenly a man came up and asked why I was here as a woman,” she tells IPS. “I told him I was not here as a woman, I was here as a journalist. But he did not accept this and started shouting at me to leave.”

The man’s verbal aggressions quickly drew the attention of a large crowd, and before she knew what was happening, a group of 50 or 60 men were attacking her.

“They beat me, they took all my valuables. They threw me to the ground four or five times. They tried to tear off my dress. They wanted to kill me – that was their main goal,” Sharmeen recounts.

Eventually, her colleagues braved the angry mob and managed to get her to the safety of a hospital. But the damage was done; her injuries left her bed-ridden for five months, and in need of multiple surgeries.

Forsaken by her employer, who refused to pay for her medical treatment and finally forced her to resign, Sharmeen got through the ordeal with nothing but her own strength and the unwavering support of her family.

Today, she is one of 10 women recognised by the U.S. Secretary of State for outstanding courage in their pursuit of peace and equality, and is currently touring the country as a recipient of the 2015 International Women of Courage (IWOC) award.

Speaking to IPS on the sidelines of an event held at the New York City Foreign Press Center Friday, Sharmeen says she considers herself “lucky”. She had a family who stood by her, and did not suffer permanent brain damage despite being kicked repeatedly in the head by scores of angry men.

Given the realities on the ground in the country, her analysis is not far from the truth: thousands of Bangladeshi women live in the shadow of violence, which manifests itself in countless ways. In 2011, for instance, 330 women were killed in dowry-related violence. In total, some 66 percent of Bangladeshi girls are married before their 18th birthdays. 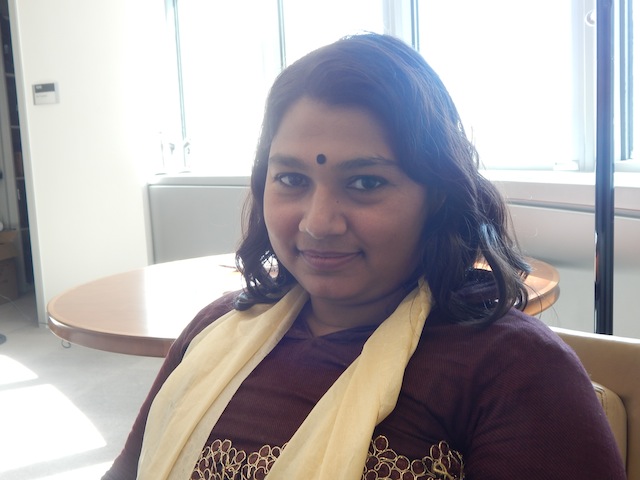 Other forms of discrimination – such as a 57-percent employment rate for women compared to 88 percent for men – also ensure that women systematically get the raw end of the deal.

In a country where gender bias is finely woven into the social fabric, it is not easy for women to get back up after being beaten down. But that is exactly what Sharmeen did.

This year, five of the 10 IWOC honorees hailed from Asia, where women comprise half of the region’s population of four billion.

Their struggles represent the diversity of challenges faced by women across Asia and the Pacific, where patriarchal laws and attitudes run deep.

Sayaka Osakabe, for instance, has spent the last several years fighting a form of discrimination that is perhaps more prominent in Japan than any other country in the region – ‘Matahara’ or maternal harassment, the practice of applying tremendous social on pressure on women to “choose” between having a child or having a career.

Quoting statistics from the Japanese Trade Union Confederation, Osakabe tells IPS that one out of four women are subject to maternal harassment, while 60 percent of all working women generally resign after the birth of their first child.

Osakabe herself faced harassment from her employers during two successive pregnancies, both of which ended in miscarriages because she was denied maternity leave.

On one occasion, her employer went so far as to turn up at her doorstep and inform her that she should not expect to renew her contract because she was causing “so much trouble” in her workplace. 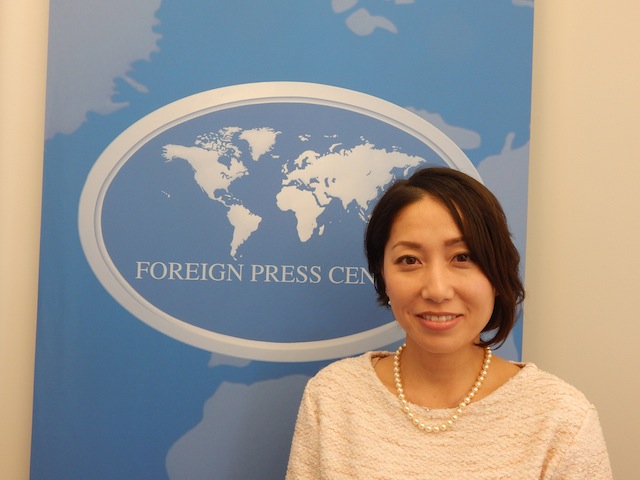 Sayaka Osakabe is the founder of Matahara Net, an organisation that fights against the practice of maternal harassment in Japan. Credit: Kanya D’Almeida

Determined not to accept such blatant discrimination, she has focused all her efforts on fighting Matahara, in the hopes that others will not suffer the same fate she did. She founded the organisation Matahara Net, which in less than a year has reached out to over 100 women facing maternal harassment.

Her struggle sparked government action, including the first-ever court ruling that demotions or dismissals due to pregnancy are, in principle, illegal.

It has been a hard-won victory. Osakabe tells IPS she faced “tremendous backlash” from many corners of society, including from women.

“Housewives and high-career women – two groups forced to choose between their jobs or having babies – are the ones who target me the most,” she says.

In a country where women account for one in three people living below the poverty line, and comprise 63 percent of those holding jobs that pay less than 38 percent of a full-time worker’s salary, ‘matahara’ threatens to widen an already gaping gender gap.

By 2060, Japan’s population is projected to shrink to two-thirds of its current 127 million people, and officials are worried about the future workforce – yet society continues to demonise women who want both a family and an income, Osakabe says.

Other award winners, like Burmese activist May Sabe Phyu, face a different set of challenges. Phyu is active in the movement to bring justice and dignity to ethnic and religious minorities, specifically to the internally displaced people (IDPs) in her native Kachin State, where civil conflict has driven over 120,000 people from their homes since 2011 alone.

In a country that has is becoming increasingly intolerant of minorities, she works against a bloody backdrop: just two months ago, Burmese soldiers raped and killed two Kachin women working as volunteer schoolteachers in a remote village in the Shan state.

Phyu herself has received threats and faces constant harassment and legal charges, but she forges on.

As a co-founder of the Kachin Peace Network and the Kachin Women Peace Network, she advocates tirelessly for the rights of displaced women and children who are most vulnerable to violence in makeshift camps. She also heads Gender Equality Now, an umbrella group of over 90 organisations collectively advocating for women’s rights.

None of these accolades have corroded her humility.

“When I heard I had been selected for this award I asked myself, ‘Do I really deserve this?’” she tells IPS, adding that many other women have shown even greater courage than she in times of adversity.

She speaks of her friend, also a Kachin woman, who first enlightened her of the plight of the IDPs and gender discrimination.

“She is my symbol of courage and whenever I’m feeling down I just look at her, listen to her, and her voice and her anchorage brings me fresh strength,” Phyu says. 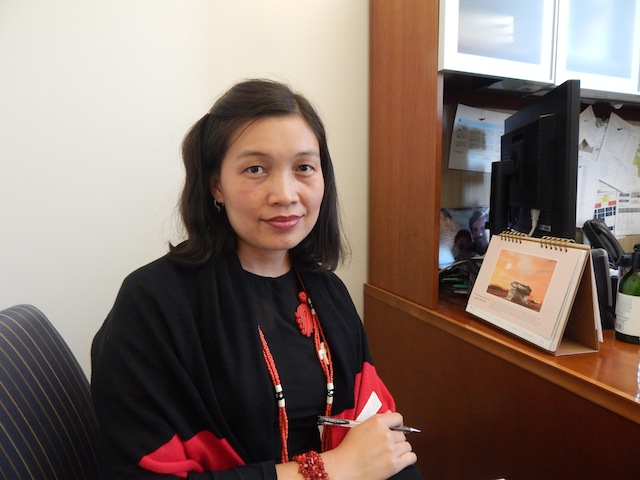 May Sabe Phyu, director of the Gender Equality Network in Burma, has been advocating for the rights of IDPs in Kachin State since 2011. Credit: Kanya D’Almeida

The remaining honorees from Asia include Niloofar Rahmani, the first female Air Force Pilot in Afghanistan’s history, and Tabassum Adnan, a resident of the formerly Taliban-controlled Swat Valley who survived 20 years of physical and mental abuse before going on to lead the first-ever women’s only Jirga (council) dedicated to issues such as acid attacks, honour killings and ‘swara’ – the practice of exchanging a woman to settle disputes or compensate for crimes.

Both Pakistan and Afghanistan are deadly places for women at the best of times, with the Afghanistan Independent Human Rights Commission (AIHRC) reporting more than 3,000 cases of violence against women during a six-month period in 2012 and Pakistan police records stating that some 160 women suffered acid attacks in 2014, though NGOs say the number is much higher.

In both countries, choosing to fight back is often a matter of life or death, but such a calculation has not deterred these women from walking the path to freedom.

Other award winners include activists and journalists from Bolivia, the Central African Republic, Guinea, Kosovo and Syria.