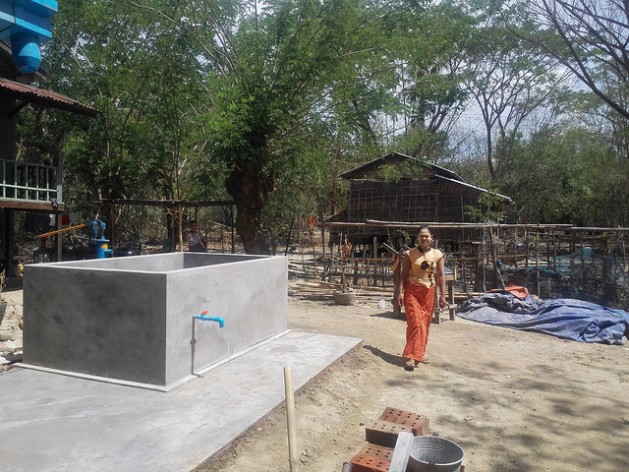 Climate change and increased urbanisation, along with earthquakes, cyclones, periodic flooding and major drought, require an urgent infrastructural upgrade if the country is to undergo a successful integration into the global economy after five decades of economic isolation under military rule.

“Water resources are abundant in Myanmar. However, we need to manage it properly to get adequate and clean water,” said Yangon regional government chief minister U Phyo Min Thein, attending a high-level roundtable on water security organised by Stockholm-based facilitator Global Water Partnership on May 24 in Yangon.

According to IMF data, Myanmar is the fastest growing economy in the world, following an easing of sanctions in 2011, when the military handed power to a semi-civilian reformist government.

“Water security is a priority for the new government,” said Myanmar’s deputy minister of Transport and Communication U Kyaw Myo.

The challenges inherited by the now de facto leader of the country Aung San Suu Kyi, however, are enormous. An expected industrial development and urbanisation boom are only going to make more urgent the need for efficient water management solutions in one of the most challenging areas of South Asia.

Water in Myanmar is plentiful, but regional and seasonal differences are so striking that the country covers the whole range of threats posed by water insecurity: flooding in the delta’s numerous rivers, flash floods in the mountains and Dry Zone, droughts and deadly cyclones. Malnutrition and illnesses are the first consequences.

Safe drinking water is also limited. Groundwater sources are highly unexploited, but those available are often saline or contaminated, mainly by natural arsenic. Villages rely extensively on open air communal ponds to collect fresh water during the rainy season. These, however, dry out quickly during the summer.

“It is important to activate stakeholders and trigger a snowball effect at this stage,” said Global Water Partnership chair Alice Bouman. It is equally important, she said, to act only once all parties have been involved and listened to. “The emphasis has to go in particular to the so-called intrinsic indigenous knowledge: only locals have a long understanding of their environment and can help to avoid expensive mistakes.”

Action should focus on how to avert disasters in the first place, not just react afterwards – that was the message coming from the Japanese and the Dutch officials sharing their countries’ knowledge at the conference.

“Investments should happen in advance and go in the direction of disaster reduction, by building better for example, or consider climate change adaptation in time,” said Japan’s vice minister of Land, infrastructure, Transport and Tourism Koji Ikeuchi.

However, said Myanmar Water Think Tank secretary Khin Ni Ni Thein, money is currently not enough. “First we need to build trust between communities and the government. It becomes easier to access to international donors when there is this connection,” she said. “But it is also important that communities pay for the service, to guarantee the structure.”

Informative statistics but also topographical data that would support reforms are scarce in Myanmar. This is partly due to poor infrastructure and fragmented institutions, with up to six ministries in charge of water issues. But the limited access is primarily a consequence of the military still being in charge of three key ministers, including Defence, and reluctant to handover precise topographical information.

The high-level roundtable on Water Security and the Sustainable Development Goals was held less than two months after the government was sworn in. Speakers from Korea, Japan, Australia and the Netherlands stressed how new policies should refer to the framework of the UN 2030 Agenda and its Sustainable Development Goals. Among these are no poverty, food security, affordable and clean energy, clean water and sanitation and also gender equality.

“A lack of gender perspective is systemic to the region and many countries. We should always target an indicator, such as water and land laws, from a gender perspective. Some women, for example, cannot interact with the institutions without a male presence, [despite the fact that it’s the women in most societies who take care of the water],” said Kenza Robinson, from the UN’s department of Economic and Social Affairs.

Poverty is especially evident in rural areas. According to a 2014 census, 70 percent of the 51.5 million population live in the countryside. Life expectancy is one of the lowest of the entire ASEAN region and much of this is due to water and food security, impacting also on child and maternal mortality.

Over 40 percent of houses in rural areas are made of bamboo, with only 15 percent using electricity for lightening. A third of households in the country use water from “unimproved” water sources. A quarter of the population has no flush toilet.