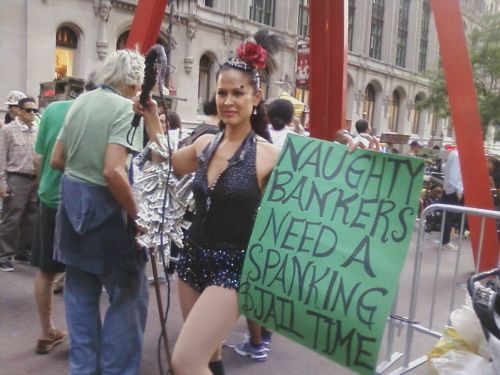 Demonstrators rallied in front of Wall Street and several other parts of New York City, amid calls for an end to what some describe as “corporate socialism". Credit: Haider Rizvi

NEW YORK, Sep 18 2012 (IPS) - Amid a heavy police presence, thousands of anti-capitalist activists in marked the one-year anniversary of the Occupy Wall Street movement against the U.S. political and economic system, which they say favours billionaires at the expense of the middle and working class.

From dawn to dusk, the demonstrators rallied in front of Wall Street and several other parts of New York City, amid calls for an end to what some describe as “corporate socialism”.

“The government in this country should be run by the people,” said Kenneth Manteau, an activist from Connecticut who said he was going to spend the night in front of Wall Street to register his protest against corporate greed.

Joblessness at officially at 8.1 percent in the United States, although some analysts say the number is far higher, perhaps closer to 16 percent, since it only includes people who are still actively looking for work. Last week, the number of people applying for unemployment benefits jumped to the highest level in two months, to 382,000.

“I have no job, no healthcare, no apartment, and my girlfriend has left me too,” Manteau told IPS, adding that he is living on donations from his friends who share his world outlook.

Asked why the turnout for the anti-Wall Street demonstration was relatively low compared to last year, he said, “You know, people have to work every day. They are also afraid of being arrested and roughed up by cops. There are so many homes in this city, but tens of thousands of people have nowhere to get some sleep.”

A person standing next to him held a banner inscribed with the slogan: “Obama 2012: Abolish Serfdom.”

“What do you think about it?” IPS asked a janitor cleaning the street. “I want to be part of this protest,” he replied. “But what can I do? They pay me seven dollars and 25 cents an hour. What can I say?”

A few feet away, another protester, Mavni Halasa, 35, posed in front of photojournalists. She wore fake dollar bills plastered to her body.

“I call myself a marvelous mistress of bank reforms,” she said. “No more exploitation. There should be banking regulation.”

In front of the barricades surrounding Wall Street, the protesters represented a wide spectrum of professional and cultural backgrounds. Amongst them were lawyers, doctors, nurses, construction workers, professors, musicians and poets. However, the majority appeared to be young people from colleges and universities.

“A huge number of university graduates, overwhelmed by the enormous debts they have been forced to assume to pay the cost of their education, face decades of future enslavement to pay off these debts, making it impossible for many of these college and university graduates to even consider raising children, as they will lack the financial resources to support a family,” said Carla Stea, a seasoned journalist who covers the United Nations.

In her view, “the Occupy Wall Street heroes are protesting their own destitution which will inevitably damage the entire American society. The one percent are intellectual zombies, dedicated to accumulating profits, and depleting the very substance of American society.

“All student debts should be abolished, and the government should assume the responsibility for paying these student debts, and for paying mortgages, instead of investing in the military. A country of ignorant and homeless citizens is a destroyed country, and a country to be ashamed of. Military victories are meaningless. An educated, healthy middle class is cause for pride,” she said.

According to the Department of Economics at the University of California, Berkeley, New York State rebates 15 billion dollars annually in stock transfer taxes to Wall Street. This potential revenue to the state is lost in the hands of the richest one percent of New York’s population, whose share is currently 44 percent of total New York State income.

Estimates from the Federal Reserve Bank of New York and the Consumer Finance Protection Bureau put the country’s outstanding student loan debt at between 902 billion and one trillion dollars.

“This young generation of educated Americans, just emerging from college or graduate schools, will be unable to assume the financial responsibility of raising children because of the massive debts they owe, (and) the already deteriorated intellectual and cultural fabric of this country will be worsened further,” said Stea.

Most U.S. television stations and newspapers covered the protests against corporate influence in Washington in a way that suggested most protesters were indulging in activities that are against so-called “American values”.

“Here we go again,” was the banner headline in the Metro daily, for example. The Wall Street Journal headline said, “Arrests Mark Protesters’ Return to NY,” but didn’t bother to explain at length, except for some quotes suggesting that there was infighting among the activist groups.

Police officals said about 146 were people were arrested in New York.

The paper concluded the story by stating that a protester said he was not planning on attending Monday’s protests because, “I have to earn a living.”