UNITED NATIONS, Sep 12 2012 (IPS) - Since wars begin in the minds of men, it is in the minds of men that the defences of peace must be constructed, says the preamble to the constitution of the U.N. Educational, Scientific and Cultural Organisation (UNESCO). 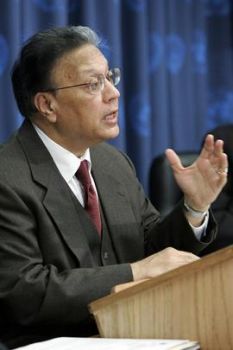 “Unless women are in the forefront of this culture of peace, long-term solutions will elude us,” says Ambassador Anwarul Karim Chowdhury, the prime mover of the 1999 General Assembly resolution that adopted the U.N. Declaration and Programme of Action on the Culture of Peace. Credit: UN Photo/Ky Chung

The UNESCO constitution clearly states that “ignorance of each other’s ways and lives has been a common cause, throughout the history of mankind, of that suspicion and mistrust between the peoples of the world through which their differences have all too often broken into war.”

These sentiments will be very much in evidence Friday as the General Assembly hosts a High-Level Forum on the Culture of Peace – even as protests in Egypt and Libya Wednesday resulted in the killings of U.S. diplomats, including Ambassador Christopher Stevens in Benghazi, over a video ridiculing the Prophet Muhammad, who is revered by Muslims worldwide.

The Israeli-American real estate developer Sam Bacile, who is credited with funding the reportedly amateurish video, was quoted as saying that “Islam is a cancer.”

Article 3 of the U.N. Declaration on a Culture of Peace, which is likely to be cited by speakers at the Forum and at the subsequent panel discussions Friday, calls for “advancing understanding, tolerance and solidarity among all civilizations, peoples and cultures, including ethnic, religious and linguistic minorities.”

“The world must build a culture of peace,” insists Ambassador Anwarul Karim Chowdhury, the prime mover of the 1999 General Assembly resolution that adopted the U.N. Declaration and the Programme of Action (PoA) on the Culture of Peace and the subsequent proclamation of the “International Decade for Culture of Peace and Non-Violence for Children of the World, 2001-2010.”

Asked about his role, Chowdhury told IPS, “Yes, it was my sole initiative, and that initiative was possible because at that time I was the ambassador to the United Nations, and I happened to represent Bangladesh.

“I chaired the General Assembly drafting committee that prepared the declaration and Programme of Action after nine-month-long complex and intense negotiations,” he said.

In 1997, Chowdhury proposed to the secretary-general the inclusion of “Culture of Peace” as an agenda item to be deliberated upon in the General Assembly plenary.

In 1998, he also proposed the U.N. International Decade for Culture of Peace and Non-violence “at the request of all living Nobel Peace Laureates made to me,” he added.

And since 1997, Bangladesh has remained the focal point for the Culture of Peace agenda item at the United Nations.

Chowhdury’s second initiative, in March 2000 as the president of the Security Council, led to the adoption of the groundbreaking U.N. Security Council Resolution 1325 on women’s contribution in peace and security.

When the United Nations commemorated the 50th anniversary of the Universal Declaration on Human Rights back in December 1998, a coalition of civil society organisations launched a global campaign for the universal recognition of the human right to peace.

They called upon all “to prevent violence, intolerance, and injustice in our countries and societies in order to overcome the cult of war and to build a Culture of Peace”.

“Both of these high aspirations remain elusive,” Chowdhury wrote in an op-ed piece published on the Inter Press Service (IPS) wire back in January 2010.

“In today’s world,” Chowdhury said, “the culture of peace should be seen as the essence of a new humanity, a new global civilisation based on inner oneness and outer diversity.

“The flourishing of a culture of peace will generate the mindset in us that is a prerequisite for the transition from force to reason, from conflict and violence to dialogue and peace. A culture of peace will provide the foundation for a stable, progressive, and prosperous world for all,” he added.

The High-Level Forum is being held in conformity with Article 9 of the Declaration which says the United Nations should continue to play a critical role in the promotion and strengthening of a culture of peace worldwide.

Secretary-General Ban Ki-moon Monday singled out Egypt’s transition from longstanding authoritarian governments to a multi-party democracy as the most recent example of the culture of peace.

“Ä democratically elected president – they say, the first election in 5,000 years – in Egypt,” he said in his address in to the University of Geneva Monday.

The consolidation of reforms in Tunisia and Libya are all encouraging, he said, even though there are some forms of instability still. “But we can help them,” Ban said.

Article 3 of the Charter also says the fuller development of a culture of peace is integrally linked to promoting democracy, development and universal respect for and observance of all human rights and fundamental freedoms and strengthening democratic institutions and ensuring full participation in the development process.

Chowdhury argued the international community should assert that there is no more crucial social responsibility or more pressing task than securing sustainable peace on our planet.

Global efforts towards peace and reconciliation can only succeed with a collective approach built on trust, dialogue, and collaboration. For that, we must build a grand alliance for the culture of peace amongst all, particularly with the proactive involvement and participation of the young people, he said.

“This is the first priority as we look ahead,” said Chowdhury, who will be moderating a panel discussion Friday on “Strengthening the global movement, advancing the implementation of the UN Programme of Action on Culture of Peace: the way forward”.

He said the second area “we need to concentrate on is giving long-overdue recognition to the fact that women also have a major role to play in promoting the culture of peace, particularly in strife-torn societies, and in bringing about lasting peace and reconciliation.

“Unless women are in the forefront of this culture of peace, long-term solutions will elude us. Women have proved again and again that it is often they who foster the culture of peace by reaching out across divides and encouraging others to do likewise.”
The third crucial focus, he said, is peace education, which must be accepted in all societies and all countries of the world as an essential element in creating culture of peace.

To effectively meet the complex challenges of our time, the young of today deserve a radically different education – one that does not glorify war but educates for peace, non-violence, and international cooperation.

“All educational institutions need to prepare students to be responsible and productive citizens of the world to introduce teaching that builds the culture of peace,” he said.

Explicit recognition of the human right to peace by the Human Rights Council and by the U.N. General Assembly should be the fourth area of focus.

In addition, he said, civil society has a major role to play in the full and effective implementation of the Culture of Peace Programme of Action, particularly in holding national governments and relevant international organisations accountable for their commitments.

“The seeds of peace exist in all of us, and they must be nurtured by all of us – individually and collectively – so that they flourish. Peace cannot be imposed from outside, it must be generated from within,” Chowdhury declared.