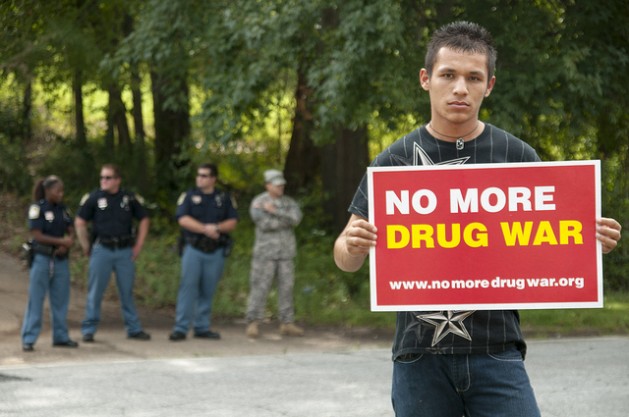 Activists protest in front of the School of the Americas at Fort Benning, Georgia. Credit: Caravan4Peace

WASHINGTON, Sep 12 2012 (IPS) - Mexican activists winding down a month-long U.S. tour warned Tuesday that guns licensed in the United States were playing a massive part in gang- and drug cartel-related violence in Mexico.

Those speaking in Washington on Tuesday were part of a movement of activists and families known as the Caravan for Peace with Justice and Dignity. The movement was started by Mexican poet Javier Sicilia in 2011 in direct response to the murder of his son, a victim of the drug war being waged both in Mexico and the United States.

According to the organisation, more than 60,000 people have died and at least 20,000 others have “disappeared” since Mexican President Felipe Calderon took office in 2006, bringing with him a newfound militarisation of the struggle against the drug trade. Over the first half of 2012 alone, an estimated 21,500 people were murdered due to drug-related violence.

The Caravan for Peace activists are calling on U.S and Mexican authorities to change these militarised policies and end the drug war. In particular, they are urging the United States to crack down on the trafficking of arms to Mexico, which has played a crucial part in the thousands of murders and disappearances and the ongoing violence that pervades the country.

“There is strong evidence that these weapons are coming from the USA,” Sergio Aguayo, a noted Mexican academic, said Tuesday, speaking of arms in drugs-related violence.

Aguayo has long had a reputation for being both critical of lax U.S gun control and contemptuous of a perceived lack of regard for Mexican lives.

The Mexican drug cartels tend to favour AK-47 and AR-15 assault weapons, the group says, which are easily available at almost all U.S. gun shops near the U.S.-Mexican border.

The U.S. Bureau of Alcohol, Tobacco, Firearms and Explosives has confirmed that approximately 70 percent of the guns being used and recovered in the Mexican drug war are of U.S origin.

And while many activists and organisations have repeatedly called on U.S. legislators to enact stricter gun control laws and stem the flow of arms into Mexico, Caravan for Peace’s agenda has always been to urge both the Mexican and U.S governments to find alternatives to the drug war.

Over the course of the past month of touring the United States, the movement has showcased individuals who have lost family members to the drug war. Olga Reyes, for instance, spoke on Tuesday about losing six members of her family to the drug-related violence, noting that she has more than 20 additional members of her family now living in exile for the same reason.

Aguayo is also highly critical of the Mexican government. “Felipe Calderon’s government has not fulfilled its commitment” towards the victims of the drug war, he says. He also warns that, despite the fact that Calderon term in office ended with the July elections, his militarised anti-drugs policies have not been halted.

But Aguayo says that much of the responsibility for the drug violence in Mexico lies with the U.S. government. “Help put out the fire at your neighbour’s house before your house catches fire and ends in ashes,” he said Tuesday, paraphrasing the former U.S. President Franklin D. Roosevelt.

For his part, Sicilia, the poet and founder of the Caravan for Peace, is clear about what is really at stake for the movement.

“We have travelled across the United States to raise awareness of the unbearable pain and loss caused by the drug war, and of the enormous shared responsibility for protecting families and communities in both our countries,” he says. “Our purpose is to honour our victims, to make their names and faces visible.”