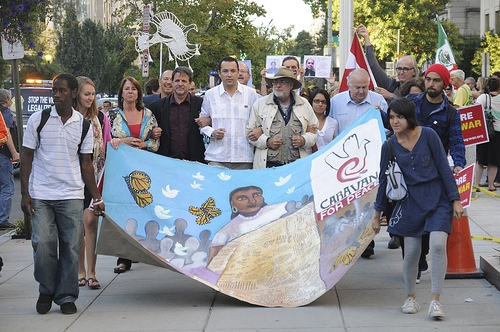 The members of the caravan march along the streets of Washington DC, with Javier Sicilia (wearing a sombrero) in the middle. Credit: Courtesy of Caravan4Peace

WASHINGTON, Sep 11 2012 (IPS) - On Monday, after a month-long trek across the United States, a caravan of victims of violence in Mexico made its way to Washington, D.C.

Protesting more than 50,000 deaths and countless cases of torture and displacement in last six years, the caravan will make its case to the United States that “drug-war” policies have only served to strengthen impunity in Mexico, while doing nothing to stop the flow of weapons into the country.

For three days in the capital, the group will share their stories with government, residents, and civil society, and culminate their U.S. journey with a Wednesday evening Vigil & Peace Procession supported by a broad representation of Washington’s faith-based, neighbourhood, and advocacy community groups.

On Aug. 12, the Caravan for Peace with Justice and Dignity (La Caravana Para la Paz con Justicia y Dignidad) launched from San Diego, California with more than one hundred victims and allies. The group is led by Javier Sicilia, a poet whose son was kidnapped and killed almost two years ago and who famously invited families to support the original two caravans for peace across Mexico last summer.

The caravans, which crossed Mexico from Chiapas in the south to the City of Juarez in the north, raised the profile of victims’ suffering and demands for justice, and perhaps for the first time in the last six years, broke the “official story” that has dominated the media in Mexico.

In the United States, the caravan visited 20 states as they headed east, sharing their testimonies and opening up a space for dialogue with communities across the country, many of which have also struggled with gun-violence and over-reaching drug laws.

Caravan participants have shared their testimonies of losing loved ones and receiving threats for denouncing abuse, at times from cartels, other times from security forces, and just as often, from both. Despite the obstacles, the Caravan for Peace has served to inspire hope for victims, their families, and those who share their grief, that violence can be defeated and victims can find justice.

Well over 50,000 people have died in the last six years as a result of violence related to the drug war. Alongside cartel killings and kidnappings, legal and human rights organisations have also denounced countless cases of torture, extortion, extrajudicial killings, and enforced disappearances committed by security forces.

Yet, the Caravan reminds us that the violence in Mexico is not random, but the result of misguided security policies that seem to prioritise prohibition of drugs over the prohibition of high-powered assault rifles. Listening to the testimonies of courageous survivors of violence makes it abundantly clear where these policies have taken Mexico.

This week, the Caravan has arrived to Washington, D.C. and will make its case for a peace in Mexico with justice and dignity. The participants of the Caravan have crossed borders and states to affirm their love for those who have died and their faith that justice must be done. They have shared a reality in Mexico that we need to know about – one impacted by heavy militarisation and gun-trafficking.

Now, it is we who must affirm what we believe in; joining the caravan this week is a good place to start.

*Salvador G. Sarmiento is an Advocacy Officer for the Robert F. Kennedy Center for Justice and Human Rights based in Washington, DC. Follow him on twitter.