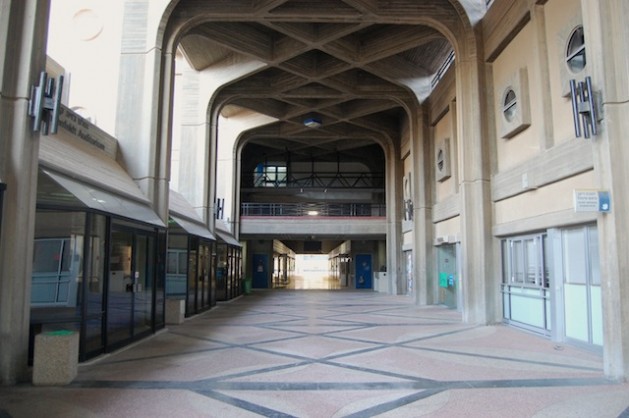 BE’ER SHEVA, Israel, Oct 9 2012 (IPS) - As the political science department at a major Israeli university has been threatened with closure in the 2013 school year, professors and students say the move reflects the politicisation of Israeli academia, and threatens basic freedoms.

“These are very dark days for academic freedom in Israel and freedom of speech generally,” Tamar Zandberg, a PhD student at the politics and government department of Ben Gurion University told IPS. The university is located in Be’er Sheva in Israel’s Negev desert.

“Even if the department ends up not being closed, I think that a lot of damage has already been done. I feel that the government is threatening us, just to deliver a message saying, ‘Beware. Don’t be critical. Be careful of what you say, with your research, (and) with your political opinions.’ Since when is it a crime to be a scholar or an academic and to be left-wing?” Zandberg said.

Earlier this year, the Israeli Council of Higher Education (CHE) established an international committee to evaluate the work of several academic departments at Israeli universities. Headed by Dr. Thomas Risse, professor at the Free University of Berlin, the committee made various recommendations.

In its evaluation of Ben-Gurion University’s politics and government department, the committee suggested a number of changes, including hiring new faculty members, and signaled its concern over the emphasis on political activism in the department.

Based on this, a CHE sub-committee for quality control recommended on Sep. 4 that the department be prevented from accepting new students for the 2013-2014 academic year. This would, in effect, shut it down.

The CHE is expected to vote on this recommendation at its next general meeting on Oct. 23.

“There is a very extremist and very closed-minded political atmosphere in Israel right now,” Zandberg said. “Some professors called it a witch hunt against everything that is progressive, liberal and even left-wing in Israel.”

When contacted by IPS by e-mail, Dr. Risse, head of the international evaluation committee that advised the CHE, said that he wasn’t making public statements at this time.

According to a recent report in Israeli daily Ha’aretz, however, the international committee recently submitted a letter to the CHE accusing it of taking measures that “were far more extreme than those recommended” and not applying the same standards to Ben Gurion University that it did to the other universities that were evaluated.

“The council should not intervene to that kind of extent in the internal working of the department and more important, not to threaten to close it, something that has never done before. The moment that they decided what is scientific and what is not scientific is the moment that they stepped beyond their mandate as far as we are concerned,” Itzhak Galnoor, chair of the Israeli Political Science Association told IPS.

More than 300 Israeli professors from various faculties and universities across the country have signed a petition denouncing the recommendation to close the department as an infringement on academic freedoms.

This widespread outcry, according to Galnoor, signals the fact that the closure threatens the entirety of Israeli academia and crosses all academic disciplines.

“There is a danger that this kind of thing will inhibit academics from doing their work, namely in the social sciences. The moment a young lecturer changes his syllabus or the way he is teaching or what he says in class is the moment when the deterioration starts,” Galnoor explained.

Over the past month, debate has also ignited in Israel over whether an academic college in Ariel – one of the largest illegal Israeli settlements in the West Bank, with a population of almost 20,000 residents – will be granted official university status.

The Judea and Samaria Council of Higher Education accepted an upgrade of the Ariel University Centre in July, yet the decision has yet to receive official approval from the Israeli central military command, which has authority over the occupied West Bank, and the Israeli Defence Ministry.

In August, the heads of many major Israeli universities – including the Hebrew University in Jerusalem, Tel Aviv University, and Haifa University – submitted a petition to the Israeli Supreme Court to overturn the decision.

The Israeli cabinet approved the upgrade, however, which has also received the vocal support of Israeli Prime Minister Benjamin Netanyahu and Education Minister Gideon Sa’ar, among others.

“The government sees the national importance of the conversion of the centre to a university and instructs that the necessary measures be taken to confirm the resolution in accordance with the opinion of the attorney general,” Sa’ar said in a statement, as reported by the Times of Israel.

According to Itzhak Galnoor, the decision to recognise Ariel as a full-fledged university, combined with the potential closure of Ben Gurion’s politics department, doesn’t bode well for the future of academic freedoms in Israel. “I do fear for the future of Israeli higher education,” he said.