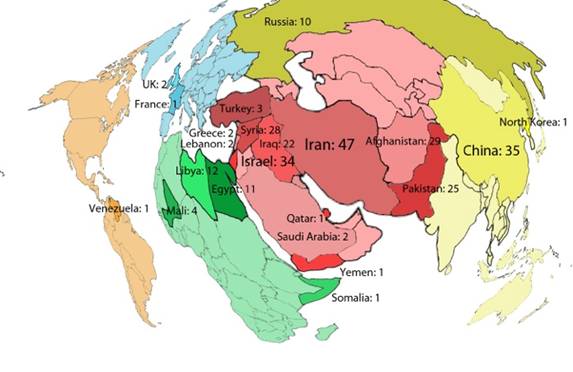 The figures signify the number of times each country was mentioned in the Oct. 22 presidential debate. Credit: Zachary Fleischmann/IPS

WASHINGTON, Oct 23 2012 (IPS) - U.S. strategy in the Greater Middle East, which has dominated foreign policy-making since the 9/11 attacks more than 11 years ago, similarly dominated the third and last debate between President Barack Obama and Governor Mitt Romney Monday night.

The biggest surprise of the debate, which was supposed to be devoted exclusively to foreign policy and national security, was how much Romney agreed with Obama’s approach to the region.

His apparent embrace of the president’s policies appeared consistent with his recent efforts to reassure centrist voters that he is not as far right in his views as his primary campaign or his choice for vice president, Rep. Joe Ryan, would suggest.

The focus on the Greater Middle East, which took up roughly two-thirds of the 90-minute debate, reflected a number of factors in addition to the perception that the region is the main source of threats to U.S. security, a notion that Romney tried hard to foster during the debate.

“It’s partly because all candidates have to pander to Israel’s supporters here in the United States, but also four decades of misconduct have made the U.S. deeply unpopular in much of the Arab and Islamic world,” Stephen Walt, a Harvard international relations professor who blogs on foreignpolicy.com, told IPS.

“Add to that the mess Obama inherited from (George W.) Bush, and you can see why both candidates had to keep talking about the region,” he said.

But the region’s domination in the debate also came largely at the expense of other key regions, countries and global issues – testimony to the degree to which Bush’s legacy, particularly from his first term when neo-conservatives and other hawks ruled the foreign-policy roost, continues to define Washington’s relationship to the world.

Of all the countries cited by the moderator and the two candidates, China was the only one outside the Middle East that evoked any substantial discussion, albeit limited to trade and currency issues.

Romney re-iterated his pledge to label Beijing a “currency manipulator” on his first day in office, while Obama for the first time described Beijing as an “adversary” as well as a “partner” – a reflection of how China-bashing has become a predictable feature of presidential races since the end of the Cold War.

With the exception of one very short reference (by Romney) to Venezuelan President Hugo Chavez and another to trade with Latin America, Washington’s southern neighbours were completely ignored by the two candidates, as was Canada and all of sub-Saharan Africa, except Somalia and Mali where Romney charged that “al Qaeda-type individuals” had taken over the northern part of the country.

Not even the long-running financial crisis in the European Union (EU) – arguably, one of the greatest threats to U.S. national security and economic recovery – came up, although Romney warned several times that the U.S. could become “Greece” if it fails to tackle its debt problems.

Similarly, the big emerging democracies, including India, Brazil, South Africa, and Indonesia – all of which have been wooed by the Obama administration – went entirely unmentioned, although at least one commentator, Tanvi Madan, head of the Indian Project at the Brookings Institution, said Indians should “breathe a sigh of relief” over its omission since it signaled a lack of controversy over Washington’s relations with New Delhi.

Another key emerging democracy, Turkey, was mentioned several times, but only in relation to the civil war in Syria.

And climate change or global warming, which has been considered a national-security threat by U.S. intelligence agencies and the Pentagon for almost a decade, was a no-show at the debate.

“There was no serious discussion of climate change, the Euro crisis, the failed drug war, or the long-term strategic consequences of drone wars, cyberwar, and an increasingly ineffective set of global institutions,” noted Walt.

“Neither candidate offered a convincing diagnosis of the challenges we face in a globalised world, or the best way for the U.S. to advance its interests and values in a world it no longer dominates.”

Romney, whose top foreign-policy advisers include key neo-conservatives who were major promoters of Bush’s misadventures in the region, spent much of the debate repeatedly assuring the audience that he would be the un-Bush when it came to foreign policy.

“I want to see peace,” he asserted somewhat awkwardly as he began his summation, suggesting that it was a talking point his coaches told him he must impress upon his audience before he left the hall in Boca Raton, Florida.

“Romney clearly decided he needed to head off perceptions of himself as a throwback to George W. Bush-era foreign policy adventurism, repeatedly stressing his desire for a peaceful world,” wrote Greg Sargent, a Washington Post blogger.

So strongly did he affirm most of Obama’s policies that, for those who hadn’t been paying close attention to Romney’s previous stands, the president’s charge that his rival’s foreign policy was “wrong and reckless” must have sounded somewhat puzzling.

As Obama was forced to remind the audience repeatedly, Romney’s positions on these issues have been “all over the map” since he launched his candidacy more than two years ago.

“I found it confusing, because he has spent much of the campaign season in some ways recycling Bush’s foreign policy, and, at least for one night, he seemed to throw the neo-cons under the bus,” said Charles Kupchan, a foreign policy specialist at the Council on Foreign Relations.

“Whether it was accepting the withdrawal timetable in Afghanistan, walking back a more aggressive stance on Syria, or basically agreeing with Obama’s approach on Iran, he seems to be stepping away from a lot of the positions he was taking just a few weeks ago,” he noted. “At this point, it’s impossible for voters to actually know what he thinks because he spent most of the campaign embracing a platform that was much further to the right.”

That Obama, who took the offensive from the outset and retained it for the next 90 minutes, won the debate was conceded by virtually all but the most partisan Republican commentators, with some analysts calling the president’s performance as decisive a victory as that which Romney achieved in the first debate earlier this month and which reversed his then-fading fortunes.

A CBS/Knowledge Networks poll of undecided voters taken immediately after the debate found that 53 percent of respondents thought Obama had won; only 23 percent saw Romney as the victor.

Whether that will be sufficient to reverse Romney’s recent gains in the polls – national surveys currently show a virtual tie among likely voters – remains to be seen.

Foreign policy remains a relatively minor issue in the minds of the vast majority of voters concerned mostly about the economy and jobs – one reason why, at every opportunity, Romney Monday tried, with some success, to steer the debate back toward those problems.