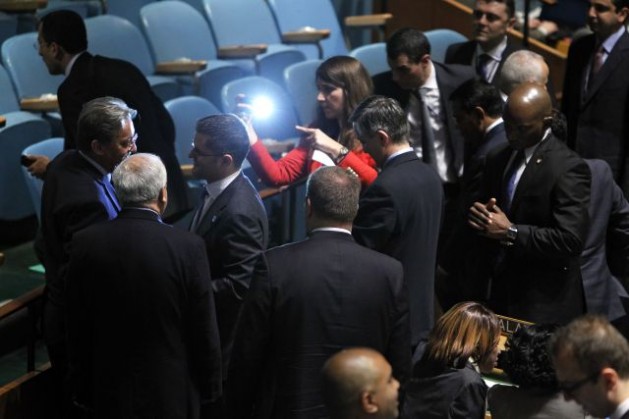 UNITED NATIONS, Nov 12 2012 (IPS) - When the former Human Rights Commission was partially dominated by countries accused of political repression, a U.S. congressman ridiculed the U.N. body where, he said, “inmates were taking over the asylum.”

“When lunatics take over, responsible people are forced to act,” snapped Congressman Dana Rohrabacher (Republican of California) back in 2001, even as he threatened to cut off U.S funds.

But judging by the strong negative reactions by international human rights groups over elections to the Council Monday, there has been little or no progress in shutting out violators from the 47-member Geneva based Human Rights Council (HRC).

The 193-member General Assembly elected 18 countries to serve on the HRC, the highest-policy making body on human rights, for a period of three years beginning next January.

Currently, all seats on the Council are allotted by regional groups: Asia, Africa, Eastern Europe, Latin America and the Caribbean States, and Western European (and other States).

But as a general rule, most regional groups match their nominations to available vacancies, thereby eliminating competition, and ensuring seats for all their declared candidates.

The only competition was in Western European group where five countries – Germany, Greece, Ireland, Sweden and the United States – battled it out for three vacant seats.

The winners were Germany, Ireland and the United States. The only requirement was 97 votes.

Asked whether competitive elections would remain a lost cause, Peggy Hicks, global advocacy director at Human Rights Watch, told IPS: “I don’t think it is a lost cause at all.”

She pointed out that only Africa has a “principled reliance on rotation rather than competition”, and Kenya was willing to challenge that this year.

“The key is to get states that care about having a stronger, more effective HRC to run,” she added. “Once they are in the race, human rights activists from the country, the region, and the world will work hard to see that the states that will make the greatest contribution are successful.”

She said “to call the vote in the General Assembly an election gives this process way too much credit.”

Until there is real competition for seats in the Human Rights Council, its membership standards will remain more rhetoric than reality, she added.

Jose Luis Diaz, Amnesty International’s U.N. representative, told IPS the best way for U.N. member states to stop non-competitive elections for the Human Rights Council is to declare loudly and clearly that they won’t stand for them and to vote accordingly.

“What we saw today is that most member states are not quite ready to do that, as only seats reserved for the Western group were contested,” he said. “That’s scandalous because it means that there is no real competition for many of the seats on the Council, contrary to what the resolution creating that body foresaw.”

He said this has a number of negative implications, including undermining accountability and transparency.

As part of a closed slate, as most candidates in this election were, contenders are practically guaranteed a spot in the Council.

“What incentive do you have then to demonstrate that you deserve a seat because you’re a good domestic and global human rights citizen?” Diaz said.

Being part of a closed slate does not automatically mean a state is a human rights abuser, but why fear competition to bring out the best representatives to promote and protect rights? He pointed out.

“I hope there will be growing attention to the lack of competition and that that will lead to more open slates,” he added.

In a statement released here, Human Rights Watch said by using a rotation system that virtually guarantees seats to countries, whether or not they meet membership standards, the African Group has effectively rejected the principle of competitive elections.

Countries with stronger human rights records in Africa have been unwilling to challenge the African Group’s standing practice of putting forward closed slates.

When Kenya declared its candidacy for the Human Rights Council at the end of July, HRW said, it briefly appeared that the African Group might buck this trend.

However, Sudan withdrew its bid for a seat in September under pressure, leaving Africa again with a closed slate of five candidates for five seats.

The Human Rights Watch statement noted that in past years, human rights organisations have mounted successful campaigns against the candidacies of Belarus (2007), Sri Lanka (2008), and Azerbaijan (2009), while Iran (2010) and Syria (2011) withdrew their candidacies under pressure from human rights groups.

Speaking on condition of anonymity, an Asian diplomat told IPS that U.S. killings of civilians by drones – whether by accident or by design – in countries such as Iraq and Afghanistan also places the United States in an ambivalent situation.

This, he said, has been made much worse by accusation of torture and water-boarding by U.S. forces, which are considered violations of human rights.