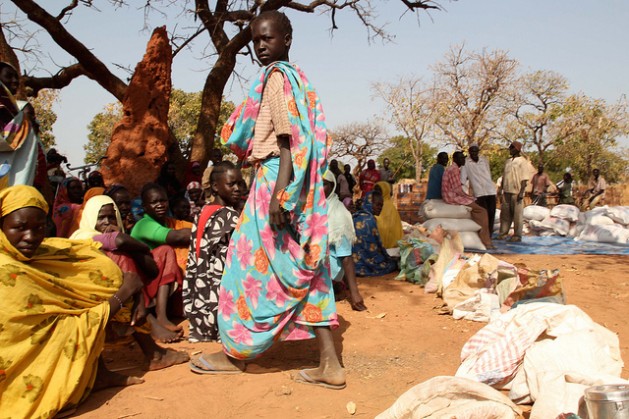 In the sprawling settlement of Yida, just south of the Sudan border, more than 20,000 people gathered last December after fleeing battles in the country’s South Kordofan state. Credit: Jared Ferrie/IPS

WASHINGTON, Dec 12 2012 (IPS) - Reporting on the results of a two-year investigation, on Wednesday the U.S.-based Human Rights Watch presented findings that suggest that the Sudanese government’s aerial bombardment of civilians in the country’s south could amount to crimes against humanity.

Since conflict reignited in June 2011 between the Sudanese state and rebels in the Nuba Mountains state of Southern Kordofan, HRW researchers report their evidence suggests that the Khartoum government has “adopted a strategy to treat all populations in rebel held areas as enemies and legitimate targets, without distinguishing between civilian and combatant.”

According to a new report, “This apparent approach lies at the heart of the serious violations of international humanitarian law documented in this report.” Some 900,000 people are estimated to have been effected.

HRW says these populations are living “under siege”, while warning that “The lack of justice for serious crimes committed during the North-South conflict” – which led to the independence of South Sudan in mid-2011 – “and Darfur also appears to have emboldened those engaged in the South Kordofan and Blue Nile conflicts.”

The Darfur comparison is a potent one, given that both Sudanese President Omar al-Bashir and Southern Kordofan Governor Ahmed Haroun have warrants out for their arrest by the International Criminal Court (ICC) for crimes committed in Darfur during the genocide carried out between 2003 and 2005.

In part, it was Haroun’s narrow re-election as governor in June 2011 that led to a resumption of conflict between the Sudanese military and a faction of the rebel Sudanese People’s Liberation Army (SPLM) that was left in the north after South Sudan voted for its independence.

The events in Darfur, which could have resulted in up to 500,000 deaths, shocked observers around the world – not only for their brutality but also for the lack of international action in response. In recent months, though observers have ratcheted up warnings that a similar sequence of events is again taking place, there appears to be little additional international sense of urgency.

In fact, the Darfur crisis was only the latest instance of ethnic cleansing to hit Sudan, which has long been wrenched between the Muslim, Arab-descended leaders of the north and the largely Christian black Africans of the south (where much of the country’s oil is located). Between the mid-1980s and 2000, some say that upwards of two million people were killed in a genocide that was likewise focused on the Nuba Mountains.

“What is happening today is a clear reprise of the 1990s, which few if any commentators fail to call genocide – this, too, is clearly genocide, the targeting of people based on their ethnicity,” Eric Reeves, a widely respected Sudan expert based at Smith College here in the U.S., told IPS.

“I think this was clear even in the summer of 2011. If there are body bags and mass graves, you have overwhelming evidence of crimes against humanity. When you have the relentless bombardment of villages and arable land, you clearly have a systematic attempt to annihilate the Nuba.”

While Reeves (who recently made available a trove of his research here) says HRW reporting constitutes the “gold standard” in humanitarian research, he warns that the organisation has severely underestimated the number of casualties in southern Sudan. While the group offers confirmed casualty numbers “in the scores”, Reeves says, “we can be sure the number is actually in the thousands.”

Such a discrepancy appears to be due to the researchers’ refusal to use reporting that hasn’t been thoroughly checked and vetted. While such a practice may be laudable, Reeves worries that the relatively low numbers that result are misleading.

Meanwhile, the violence in the Nuba Mountains, in Southern Kordofan, has received far more attention in recent months, but it appears that the nearby state of Blue Nile could well have the larger humanitarian crisis, though relatively less information on the situation there is available.

HRW reports that around 140,000 refugees have now fled into South Sudan, leaving behind tens of thousands more displaced within Blue Nile. Meanwhile, despite an August agreement that was to have allowed the resumption of humanitarian aid into the area, the report notes that the government continues to blockade the state.

Researchers met families that, over the past two months, had been forced to cut down their food intake to just a single meal every five days.

As in Southern Kordofan, HRW reports that its evidence of “repeated indiscriminate attacks that have harmed civilians and damaged their properties … could amount to war crimes.”

It remains to be seen whether the new chief prosecutor at the ICC, Fatou Bensouda, pushes more aggressively to carry out the pending warrants against Sudanese officials.

On Wednesday, the Sudanese official in charge of Darfur, Amin Hassan Omar, dismissed the ICC as a politicised, neo-colonial entity, and reiterated that his government would not cooperate with its investigations.

Yet thus far, other international processes, including those spearheaded by the United Nations and the African Union, are seen as either ineffectual or nonstarters.

HRW’s analysts characterise the international response as “muted”, having focused particularly on easing tensions between Sudan and South Sudan, which nearly went to war in April.

The organisation calls on multiple international actors – including the United States, European Union, China and Qatar – to “urgently” push the Khartoum government to end all tactics that contravene international law and allow humanitarian access into affected regions, in addition to pushing Sudanese officials to cooperate with the ICC.

On Monday, the United States announced that its special envoy to Sudan and South Sudan, Princeton Lyman, would be stepping down after two years in the position. Although President Barack Obama lauded Lyman’s “tremendous job”, Eric Reeves calls Lyman’s tenure “ineffective”, marked by periods of “spectacular foolishness”.

“He has failed to secure humanitarian access, and everywhere you look there is failure,” Reeves says. “Lyman has done nothing to bring additional pressure to bear in the hopes of change in southern Sudan.”