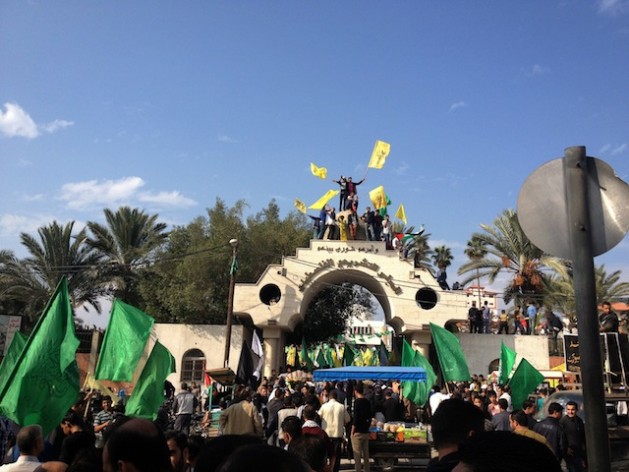 Yellow Fatah flags and green Hamas flags are seen together in a rare show of unity at a rally in Gaza after the Israeli attack. Credit: Mohammed Omer/IPS.

GAZA CITY, Dec 8 2012 (IPS) - The Islamist party Hamas had been losing support as a result of economic difficulties and factional fighting. Today Hamas is popular again, heralded for its retaliation in Israel’s latest military assault on the Gaza Strip.

Forty-year-old Ahmed Al Biltaji says his sympathy with Gaza after its election in 2006 had waned of late. Now he says he is ready to “gift” any of his five sons to join the resistance against Israel.

Umm Ala’a was more worried about high prices, scarcities and heavy taxation than pleased by Hamas’s strict interpretation of Islam. Her sons were loyal to Palestinian Authority President Mahmoud Abbas’s Fatah movement in the West Bank and not to Hamas in Gaza where she lives.

She had vowed she would “never change her mind.” She has, about Hamas and about Fatah.

When a crude homemade rocket launched from Gaza Strip landed near the home she and her family were forced to flee at gunpoint in Jerusalem in 1948, for the first time in decades she says she didn’t feel helpless. Hamas had fought back.

Al Biltaji says the more Israel hits Hamas, the more popular the Hamas government becomes. “Air strikes by Israel will unite Palestinians until differences are replaced by unity between Fatah and Hamas.”

More than 1,000 rockets were fired from Gaza through the eight-day Israeli assault. Most were destroyed mid-air, or landed in open fields. Eight Israelis died in these attacks. In Gaza 178 Palestinian people were killed, and 1,399 injured.

The Israeli population suffered a measure of what Gazans live with all the time. But in Gaza there are no warning sirens. There are no shelters and there is no escape. Gaza doesn’t have an army, a navy or air force. It doesn’t have a missile defence system that could blow up targeted missiles before they crash into a family’s home. And Gaza doesn’t have anti-aircraft guns to prevent F-16s and helicopters from firing on its people.

Gaza has small arms, slingshots, rocks and homemade rockets. It has now developed a capacity to deliver these rockets into Israel’s major cities, even if they are homemade and without live charges in the shells.

People now see that there is a cost to Israel for attacking Gaza. The effect this has had on the people of Gaza cannot be underestimated.

A Khan Younis bus driver who disliked Hamas for “increasing taxes on my bus, spare parts, oil and gas” says he is happy if taxes help the resistance. “If they take away my buses I won’t complain. If they ask me for my sons, I am not going to decline.”

Many former Fatah members, once bitter rivals to Hamas, are now rallying for all Palestinians to stand united against the occupation. “What concerns me is that we were acting as collaborators with Israelis. This indirectly marketed a culture of defeat among our people,” a former colonel with the Palestinian Authority tells IPS. “One wishes to be part of the glory that this resistance has achieved,” he says. “Not only by Hamas, but also other political factions.”

Al Biltaji believes Hamas learnt from its mistakes through Operation Cast Lead in 2008-2009, and developed different strategies. During Operation Cast Lead several Hamas uniformed members were killed. During Israel’s recent missile attacks on Gaza, many Gazans noticed there were few casualties in uniforms. “The time for us feeling like scapegoats is over. It’s time is for victory and liberation,” Al Biltaji says.

Hatem Selmi, a 27-year-old cameraman believes Hamas has sharpened its image during this last ‘victory’. Selmi carries painful memories of Hamas after his father and brother were arrested and punished for loyalty to Fatah. “That hurt me deeply, and I carried a grudge.” Now, he says, “Hamas has a better image in my mind for being able to hit back at Israel and protect Palestinians.”

Hamas political leader Dr. Mahmoud Al-Zahar has told journalists his movement would go on smuggling in resistance weapons by all means possible.

“This is perhaps the beginning of the end of Israel’s occupation,” says Khafaja, another new Hamas supporter.