NEW YORK, Jan 31 2013 (IPS) - Mumia Abu-Jamal is without doubt the United States’ most well-known prisoner. After living on death row for 30 years, Abu-Jamal’s sentence was commuted to life imprisonment in early 2012 after decades of advocacy by anti-death penalty and anti-racist activists. 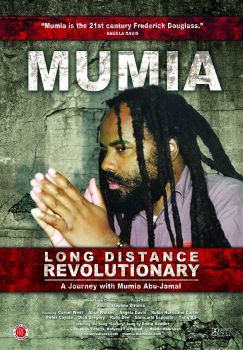 It comes as something of a shock, then, that despite Abu-Jamal’s status as a cause célèbre, there is no comprehensive biography of the man’s life and achievements. “Long Distance Revolutionary: A Journey with Mumia Abu-Jamal”, a new film by Stephen Vittoria, fills that gap.

The film’s interviewees include such luminaries as Alice Walker and Cornel West alongside noted independent journalists Amy Goodman, Juan Gonzalez, and Dave Zirin and a host of other cultural and political icons. Through a combination of meticulous research and heavy use of archival footage, Vittoria constructs a powerful narrative of Abu-Jamal’s life and career as a journalist and social critic.

“We were going to attempt to tell the 500-year story of the march of empire,” Vittoria told IPS, “from the time Columbus set foot on Hispaniola to the invasions and occupations of Iraq and Afghanistan.”

Sensing that the scope of that narrative was too ambitious for a feature film, Vittoria sidelined the project and decided instead to tell the story of Abu-Jamal’s life.

Other films about Abu-Jamal have focused primarily or in some cases exclusively on the controversial murder conviction for the shooting of a police officer that landed him on death row. “Long Distance Revolutionary” takes the polar opposite approach. It treats the case the same way that Abu-Jamal seems to: as a fact of his life. As the film emphasises repeatedly, Abu-Jamal has never used his platform to protest his own conviction.

“Whether the case existed or not, this guy is a brilliant journalist who over the course of the last three decades has evolved into a brilliant social critic,” Vittoria says.

Although Mumia is a household name to many progressives and leftists, little attention is paid to his life beyond his case. Vittoria calls his film “an untold history of Mumia”.

True to its subtitle, “Long Distance Revolutionary” takes the audience on a journey through Abu-Jamal’s life. The narrative flows through his career, beginning with his start as a journalist for the Black Panther newspaper at the age of 15 to his career as a reporter for the Philadelphia National Public Radio affiliate.

We follow his meteoric rise as a successful broadcaster, becoming a featured reporter on NPR’s show All Things Considered. Then, Abu-Jamal was elected president of the Philadelphia chapter of the National Association of Black Journalists and turns down a lucrative offer to become a television reporter because the station would have required he cut off his dreadlocks.

Along the way, the film’s impressive cast paints a picture of a Philadelphia filled with overt racism and police brutality, obscured, in Temple University professor Linn Washington’s words, by “a veneer of liberalism and a Quaker mystique.” At the centre of this tension is Abu-Jamal, whom Philadelphia police make a point of watching closely.

Filming Abu-Jamal has not been permitted since 1996. To shoot a documentary with your primary subject unable to be filmed presents a unique set of challenges. Vittoria jests that “it’s like filming Jaws without being able to show the shark.” But it is in working through these limitations that Vittoria’s art as a director shines.

One way Vittoria brings Abu-Jamal to life while he is physically absent is having the film’s pundits read aloud selections from the books Abu-Jamal penned from behind bars. “I wanted to see how Mumia’s words came from the people we had in the film,” Vittoria says. In addition to the regular interviewees, a crew of spoken word artists also take turns reading and interpreting Abu-Jamal’s words.

Even with this, Vittoria still had to grapple with the inability to film Abu-Jamal in his prison cell, which is a defining part of his existence for the past three decades. To not show the cell would be to not accurately portray Mumia. Vittoria made the risky artistic decision to stage a recreation of the cell using a lookalike actor, Troy Alcendor.

“I’m not a huge fan of recreations in films,” Vittoria tells IPS. “But recreations work if they are done in a very stylised manner so you’re just giving the audience a hint of what you’re representing. You’re not trying to make it a docudrama; you’re almost trying to make it like a painting. I wanted those scenes to be poetry. And the poetry is beautiful as he’s writing or it’s ugly as he’s just existing in this cinderblock cage.”

The risk pays off as those scenes provide a uniquely human element to the film, which is sorely lacking in other portrayals. Although the producers of the film are all sympathetic to Abu-Jamal’s politics, it refrains from being an exercise in hero worship. The film is about who Abu-Jamal is as a human being as much as anything else.

In one scene, we are told that visitations to Abu-Jamal at prison are “non-contact”. Actor Giancarlo Esposito remarks, “I imagine he must be extremely sensitive on his skin and on his touch,” offering viewers an opportunity to ponder a side of Abu-Jamal not often seen. The film is full of such moments and succeeds in humanising a man who has been so violently dehumanised.

Despite their close relationship that has blossomed through the film-making process, Abu-Jamal has not seen the film and according to Vittoria had no editorial say over its production. They are currently co-writing “Murder Incorporated”, which has been turned into a book, trading off chapters and mailing them to each other in and out of prison.