ABU DHABI, Jan 17 2013 (IPS) - Trying to predict the future of the energy sector is like trying to predict the weather in London in an era of global warming. But delegates had a go at it during the three-day World Future Energy Summit, which ended in Abu Dhabi on Jan. 17. 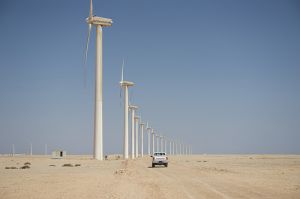 Desert winds can be a potent energy source. Credit: IPS

Among the many possibilities, they foresee new world leaders in the energy sector, the development of innovative forms of storing renewable power, and the creation of super grids to transport this energy – all amid a host of “enormous” challenges, in the words of one delegate.

As a representative of the world’s biggest oil and gas company by capitalisation, Mauritzen stressed that an “integrated set of solutions” will be necessary to meet the needs of the world’s expanding population, forecast to reach nine billion by 2050. He sees fossil fuels as being an inevitable part of the future energy mix.

But many other delegates see other possibilities, especially as an increasing number of countries turn to renewable energy.

“We don’t need to wait for any breakthrough technology, we can start now,” said Bjorn Haugland, executive vice president and chief technology and sustainability officer for the Norwegian risk-management foundation Det Norske Veritas (DNV). Over the past three years, the company has boosted its boosted its climate change services and on Friday Haughland announced the creation of a new research unit in Holland on “smart grids” and “super grids”.

For the DNV executive, battery technology and super energy grids are key to the successful development of the renewables field.

“Storage is about efficiency,” Haughland told Terra Viva. “The demand for energy is going up and up, and so in order to be efficient, we should have the ability to store energy when we have enough of it and to use it when we want.”

But storage technology lags behind other areas of the “green” sector, and batteries developed to store renewable energy are still too expensive, he said. Transportation of batteries is also a concern for environmentalists, and that’s where the grids come in.

“These will be essential for renewable energy over the next 20 years,” Haughland said. “We see super grids developing in India, China and some places in Europe.”

Super grids will be used to transport high amounts of energy over long distances, and this will revolutionise the green sector as solar energy produced in one region can be sent to another, Haughland said.