ABU DHABI, Jan 16 2013 (IPS), Jan 16 2013 (IPS) - Renewable and sustainable energy could emerge from a basic equation, according to some business leaders at the International Renewable Energy Conference (IREC), hosted by the World Future Energy Summit taking place in Abu Dhabi this week.

Politicians need to implement the right policies that would boost the green energy sector and cause people to change their behaviour, and this would be akin to letting the sunlight in, to simplify the message from IREC, which acts as a common platform for government, the private sector and civil society to discuss renewable energy.

But nothing is ever so easy, as Harry Verhaar of the Dutch company Philips readily concedes.

“We are in need of momentum,” he told TerraViva, following a debate on energy efficiency as the “second pillar” of sustainability. “The direction we’re taking is the right one, but the speed and the scale are lacking.”

Verhaar, head of global public and government affairs at Philips Lighting B.V., points to the practice subsidising energy as an example of mistaken government policy in some countries.

“Unfortunately, things that you give away for free get wasted,” he said. “If the principle is that you subsidise wrong consumption behaviour, or wrong choices that people are making, then the impact will be that progress will be slowed down as people stick to their existing behaviour.

“I would say that we need to move from subsidising to financing. If you finance a better behaviour that reduces the energy bill or reduces maintenance, then you see to it that people in the end have lower overall costs so that they can do without subsidies after financing is paid back.” 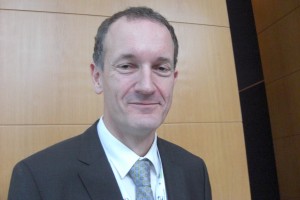 Subsidising fossil fuel such as petrol, is like “being in handcuffs without a way out”, he said.

“You maintain the carbon intensity, and prices go up. But if, on the other hand, you susidise new technologies, you will help them go from infancy to maturity and they become cheaper over the long run.”

Verhaar said that governments need a “carrot and stick” strategy to make people see the benefits of sustainable lifestyles. “With the carrot, you motivate people to shift their behaviour to see the tangible benefits. But you also need a bit of the stick in the form of legislation to do the right thing, and you need education to teach children about sustainable development and energy efficiency.”

He and other executives said that governments and the corporate sector have a shared responsibility to educate people about the long-term benefits of new technologies that can lead to sustainable energy.

Steve Howard, chief sustainability officer for the Ikea Group, the huge Swedish furnishing retailer that launched a new global sustainability plan last year, said that government, foundations and business leaders must tackle the issue together.A key concept for Ikea is that buying more sustainable products shouldn’t be a luxury, he said, but should be affordable and easily attainable. The retailer intends, for instance, to sell only low-energy conduction stoves “at the lowest prices” in a few years, rather than electrical stoves that use more power. It also wants to produce 70 percent of its own energy by 2015.

Asked why Ikea stores weren’t more present in the developing world, where many of its “sustainable” products are being made, Howard told TerraViva, “We are emerging in emerging markets.”

China was “a really important country” for Ikea, he said, as is Russia. “We tend to be very active from trading points of view in countries such as Bangladesh and Vietnam — and then some years later we establish a presence there. But we need there to be a city with a certain number of consumers to make our business viable.”  (END)