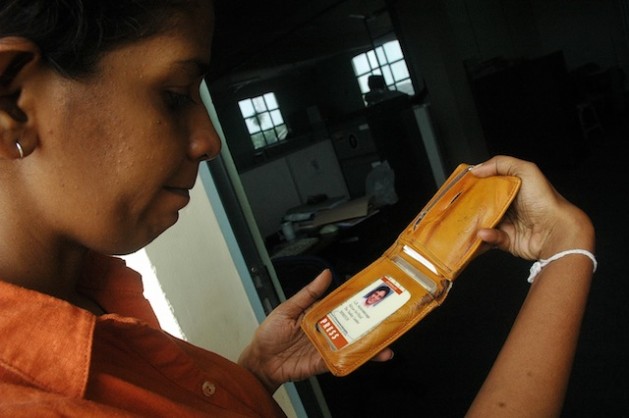 COLOMBO, Feb 14 2013 (IPS) - The year was 1998 and porters at the wholesale vegetable market in the Sri Lankan capital Colombo had gone on strike, virtually suspending vegetable distribution in the city and its suburbs.

A national news channel, Sri Lanka Maharaja Television, had dispatched a crew of reporters to cover the porters’ union general meeting; the atmosphere was charged and tension was palpable.

“Suddenly,” recalled a female journalist who was just a young cub reporter at the time, “I was surrounded by hundreds of bare bodied men, some holding metal hooks and sweating profusely, all wondering what the hell this young woman was doing there”.

She told IPS that she soon realised the throng of men “wanted only one thing: they wanted the attention of my team, all of them wanted to tell the story.”

The incident, memories of which have stayed with her throughout her entire career, is just one example of how even a relatively mundane assignment can turn out to be a dangerous encounter for a female journalist, she said.

A decade and a half later, women continue to tread on eggshells as they navigate an incendiary media landscape in this South Asian country of 20 million people.

The island’s overall press freedom indicators are not glowing. A recent compilation of global statistics by the Paris-based media rights watchdog Reporters Without Borders (which goes by its French acronym RSF) ranked Sri Lanka 162nd out of 179 countries on its press freedom index, sandwiched between Rwanda and Saudi Arabia.

According to the New York-based Committee to Protect Journalists (CPJ), 19 journalists have been killed in the past two decades, nine of them in the last eight years. To date no one has been convicted for the crimes.

On Jan. 28 over 100 journalists gathered in Colombo to protest against assaults on the media. The ‘Black January’ commemorations have become an annual event to remember assassinations, attacks and intimidations of colleagues.

Though attacks against the press have been on the decline, the bleak forecast for the future is that those responsible for violence, disappearances and even murder will continue to roam free.

Within the general climate of fear and repression of the media, women face a unique set of challenges. The latest protests were a grim reminder to female reporters that they are walking on thin ice.

“Sometimes the threat levels become more severe because you are a woman,” a female foreign correspondent with over two decades of working experience in Sri Lanka told IPS.

The mother of a young daughter, Abeywickrema feels that female journalists face even more pressure when they have families to consider.

“I am a mother and a wife — what will happen to my family if something happens to me?” she asked.

“Many female journalists walk down the safe path, and may not touch sensitive stories that they would have done in the past,” she said, because of concerns for their families’ safety.

Dilrukshi Handunnetti, senior deputy editor at the daily ‘Ceylon Today’ believes the intimidating environment has led to “a change in our newsrooms over the past few years, a collective (decision) to practice self-censorship”.

Abeywickrema and Handunnetti are intimately familiar with the fatal consequences of disregarding personal safety. Both were senior journalists at ‘The Sunday Leader’ when its founding editor, Lasantha Wickrematunge, was killed in broad daylight, just five minutes from their office, on Jan. 8, 2009.

Abeywickrema drove past the site of the attack – which involved four armed men on motorcycles – minutes after it had taken place.

No one has been charged so far for the gruesome murder. Wickrematunge’s widow, journalist Sonali Samarasinghe, and his successor at the newspaper, Frederica Jansz, both now live in exile due to threats on their lives.

Jansz in particular received several death threats after she took over the paper in mid-2009.

She complained that unidentified motorcyclists followed her home just a few days before her flight out of the country. In exile, she told media that she valued her role as a mother to her two sons more than that of a “hero journalist”, which prompted her decision to leave.

The current editor of the newspaper, Sakunthala Perera, is also a woman.

It is not uncommon for women to hold senior positions in newsrooms. Many female journalists agree that women have gained ground in the Sri Lankan media scene, especially in English-language and electronic formats.

“One positive indication that women are breaking ground in Sri Lanka is the (presence) of female sports reporters in our news team,” Ceylon Today’s Handunnetti told IPS. “That is something that was unheard of when we joined newspapers.”

But she sounded a cautionary tone about gender equality in the field, explaining that while women have made huge advances as professional news-gatherers, they continue to be largely excluded from some niche areas.

She stressed that women rarely receive training on reporting from hazardous areas such as post-disaster sites or conflict zones, adding that few newsrooms take precautions against the specific dangers women face in the field.

Abeyawickrema recalled that when she covered the aftermath of the 2004 Asian tsunami in Sri Lanka, she did so without any formal training, entering potential high-risk zones without any knowledge on how to ensure her personal security.

Another female reporter who worked at ‘The Sunday Leader’ in 2004, but has since left, told IPS that she once spent the night in a camp set up for tsunami victims where she could “feel men moving near my tent all through the night”.

“I was completely vulnerable,” she said, adding that neither her colleagues nor her editors at the time understood the trauma of that experience.

According to Abeyawickrema, female journalists are constantly reminded of their vulnerability to attacks, especially of a sexual nature, during field assignments.

“I am experienced enough to know when to stop pushing the envelope,” she said. “But I don’t think many juniors are aware of the risk.”

A female journalist working in the eastern city of Batticaloa told IPS that she has now limited her work to stories involving women and development, because she felt unsafe reporting on incidents of a more political nature.

“Once (in 2011) members of an armed political group crowded around me when I went to report on an incident involving one of their members and a village woman who rejected his advances. Some of them were so close that I could feel their breath — the silent message was: ‘You know what could happen, right?’”

One positive development, Abeywickrema said, has been an outburst of peer support in response to the murky media environment for women.

She said female journalists are diligent about looking out for each other and offering advice to juniors. “I think we are a lot more conscious about the environment we operate in than we were in the past,” Handunnetti concluded.